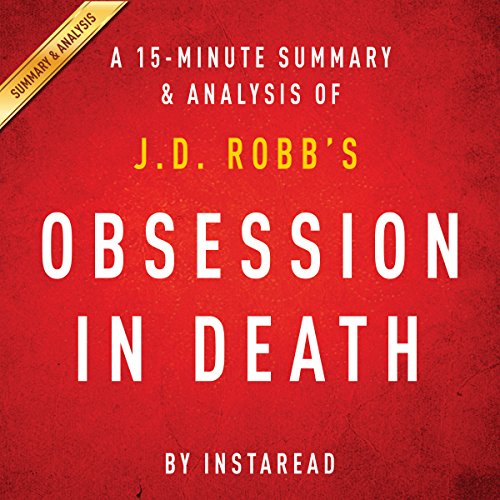 Obsession in Death by J.D. Robb - A 15-Minute Summary & Analysis

Obsession in Death by J.D. Robb - A 15-Minute Summary & Analysis

Set in 2060, Obsession in Death is a murder mystery by J.D. Robb that features homicide detective Lieutenant Eve Dallas. This is the fortieth book in this futuristic crime series.

Lieutenant Eve Dallas is called to the scene of a murder. Leanore Bastwick, a defense attorney, is the murder victim. A message to Dallas is written on the wall at the murder scene claiming it was done for Dallas and that justice has been served.

Dallas and her partner Detective Delia Peabody, check the security disc recording from the location of the murder. The killer is dressed as a delivery person carrying a box. The person's face is hidden. Charlotte Mira, a police psychologist and profiler who works with the New York Police and Security Department (NYPSD), tells Dallas that the murderer is obsessed with her. The killer believes that he or she is a friend and supporter of Dallas....

Please note: This is an unofficial summary and analysis of the book and NOT the original book.

Inside this Instaread Summary & Analysis of Obsession in Death:

Only purchase if you want the dullest book report ever. The narrator sounds like he is reading stereo instructions. I was hoping for a deeper analysis of the book. An intellectual dissection of the story and impact on the series and caracters.