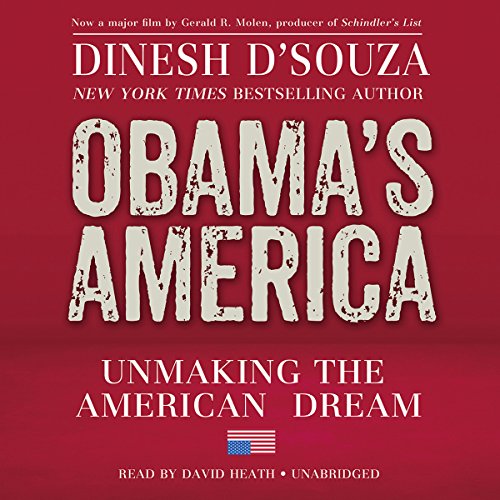 In his controversial New York Times best seller, The Roots of Obama’s Rage, Dinesh D’Souza answered the question on everyone’s mind: why is President Obama hell-bent on seeing America fail? The reason, D’Souza explained, is Obama’s fervent anticolonial ideology. Here, in his blockbuster follow-up, Obama’s America, D’Souza shows how President Obama is applying his anticolonial ideology to unmake America and turn it into a country our founders would hardly recognize.

Obama came into office with an eight-year plan for America, argues D’Souza. If he’s reelected in 2012, he will be able to finish the job—and destroy America’s future. Making the case that Obama must be a one-term president, Obama’s America reveals what unchecked power will do to this great nation and is a must-listen for anyone who cares about America and her future.

Dinesh D’Souza is the president of King’s College in New York City and author of the New York Times best seller The Roots of Obama’s Rage. He is also a former White House domestic policy analyst and research scholar at the American Enterprise Institute and the Hoover Institution at Stanford University. His other best-selling books include What’s So Great about Christianity, What’s So Great about America, and Life after Death. He lives in New York with his wife and daughter.

What listeners say about Obama’s America

I never knew a "political" book could be so great!

What did you love best about Obama’s America?

There's a lot of people out there who will offer criticism of Obama, but nobody has done their homework like D'Souza has. He explains the psychological makeup and background of Obama and shows why the president does what he does.At the same time, you can intuit that D'Souza doesn't 'hate' Obama. He's not one of these people operating from an 'us versus them' world view. No, he just wants people to know what's really going on so he tells you the truth about the things Obama does without scorn or malice.

Obama was not ready for Prime Time

Yes I have done this already. D'Souza logically argues his points and often quotes from Obama to prove his points.

If Obama is such a "nice guy" why does not he help HIS brother George Obama? George is family!!! Yet, Obama wants everyone to help others....the rules seem NOT to to apply to this President. Obama went to one of the most expensive and elite private schools in Hawaii....I went to public school.

My fear for my grandchildren's future

Masterful story hope it's not true

Would you consider the audio edition of Obama’s America to be better than the print version?

I think there both equal, I will say David Cochran Heath did a masterful job as our narrator and one of the reasons I would recommend this to others.

I think tracing the Presidents roots back to his father and seeing where he gained his insights and his understandings. I just hope it's not going to be as real or as true for what 2016 will look like based upon those said insights.

What about David Cochran Heath’s performance did you like?

Very well could do that, but I liked breaking it up over a few days so I could allow somethings and some insights soak in. Very well told story and like I have said I so hope 2016 will not look like that.

If you watched 2016 then you will want to listen to this book. It is very well done to help you understand where the President comes from about his insights. I recommend this to everyone that just likes to gain some insights on there own.

Scary and sad, but probably true

That he provides insights into Obama's belief system by studying those who he most influencd by.

What about David Cochran Heath’s performance did you like?

I was disturbed, as I now understand this is who Obama is, and it won't get better.

A case for why you shouldn't vote for Obama

What did you love best about Obama’s America?

It is a well made case for why you should RUN to the polls to vote for anyone other than Obama!!!

What other book might you compare Obama’s America to and why?

Have you listened to any of David Cochran Heath’s other performances before? How does this one compare?

Would you listen to Obama’s America again? Why?

Yes, go over it again

Which character – as performed by David Cochran Heath – was your favorite?

It was not that kind of a book

If you could give Obama’s America a new subtitle, what would it be?

THIS IS OUR AMERICA,LOVE IT OR LEAVE IT

The book could have mention that two schools were named after Obama ,and the fact that his step brother (George) was not allowed into the United States.

It was the most outlandish story about one of the most intelligent, humanistic, presidents we have had! I am actually very sorry to have spent my precious time & money on such a bizarre & twisted mind of Dinesh D’Souza!
I would love it if he would write on President Trump! It would be then that I could better evaluate this D’Souza author.

The information presented in this book should have been reported by the media. It is eye opening and backed up with facts. D'Souza's own background and history lends credence to this book. In addition, I feel that D'Souza presented this book in a respectful way, and lets the facts speak for themselves. The reader is left to draw their own conclusions.

This book made me want to get involved in the November 2012 election.

Would you consider the audio edition of Obama’s America to be better than the print version?

The audio performance was excellent.

America is asleep at the wheel. Although I feel some of the claims go a bit far in the book, the author does a good job of using facts to support his hypothesis. I'm a conservative so this book did not do much to change the views I already have.

I was a little disappointed in the movie 2016 after listening to the book. I expected some new revelations, but it was a rehash of the book. Still an enjoyable and enlightening listen. The speakers voice was easy to listen to, and he did not use the typical repetitive cadence that you often hear in other audio book performances.

No, it took a little time to think through