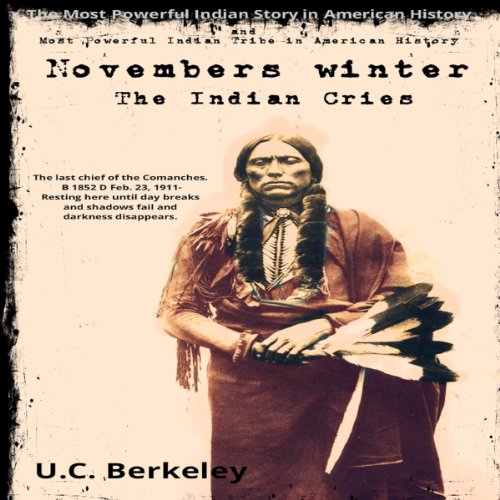 Novembers Winter, The Indian Cries: The Most Powerful Indian Story in American History

The Most Powerful Indian Story in American History
By: U.C. Berkeley
Narrated by: Lynn Benson
Length: 7 hrs and 12 mins
Categories: History
4 out of 5 stars 4.0 (1 rating)

Novembers Winter, The Indian Cries: The Most Powerful Indian Story in American History

Through Novembers Winter Air, The Indian Cries: The Most Powerful Indian Story in American HistoryIn this book I have tried to make a faithful representation of Quanah Parker, his background and associates; to give an understanding portrayal of his life and work. Historical material has been carefully studied and followed, checked with members of the family; and I have a personal acquaintance with much of the territory and some of the particular places involved. However, it has been necessary, especially in the earlier part, to reconstruct the story from the little that was known, much as the paleontologist frames the skeleton of some prehistoric dinosaur from the bones that have been dug up.In the account of Adobe Walls, historical material has been supplemented by personal study of the terrain, and by stories told me by William .M. (Bill) Tilghman, who was hunting in the vicinity and came into the fort two days after the battle, and Andy Johnson, carpenter of Dodge City, who was in charge of building the trading post, and was in the fort during the battle Phoebe Ann White has drawn from photographs, faithful and artistic illustrations which I feel add much value to the book. Grateful acknowledgments are given to Reverend White Parker, son of Quanah, who has read and corrected the manuscript; to Dr. E. E. Dale and the University of Oklahoma for the use of the Phillips Historical Collection; to Mr. Gaston Litton for obtaining old newspaper references and other sources; and to Mr. Ivie for friendly criticism throughout the work, and for assistance and information on Comanche words and language. U.C. Berkeley Archives
©2013 MonKeyBone Publications (P)2013 MonKeyBone Publications

Tis is history and a book that leaves me breathless.
A story of people, families natives and immigrants , friends and enemies that changed the history of our country. Wish I could rate this true history and biography book with a hundred stars. Hope many of you hear it.


1 of 1 people found this review helpful

if you're like me and absolutely CANNOT STAND the sound of people making sounds with their mouth this audio book will make you pull your hair out!!!!! it sounds like he is very thirsty while talking. it absolutely ruined my experience.

This is an extraordinary collection of stories about the life and times of the great Comanche chief Quannah Parker. The stories range in topics such as his mother's kidnapping, Quannah's childhood, the ways of the Comanche and Quannah's relationship with US Govt on behalf of his people.

I can't praise the collection enough. The author used sources, such as Quannah's own son, and other sources which would forever be unavailable to us as years separate us from Quannah's life.

7 of 10 people found this review helpful