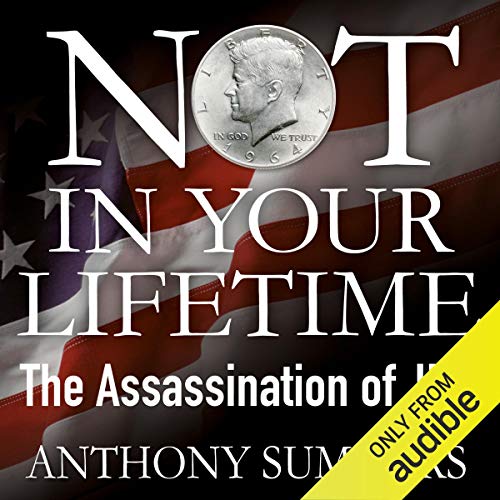 Not in Your Lifetime: The Assassination of JFK

'It might not be in your lifetime,' said the Chief Justice of the United States when asked whether the files on the assassination of President Kennedy would be made public. If the President was killed by a lone gunman, as the first official enquiry claimed, why can we still not see all relevant records?

Fifty years on and the murder of the century remains unsolved. Drawing on 30 years of investigation, Anthony Summers examines the case in compelling, forensic detail. He analyses the evidence for Oswald's guilt, the Mafia connection, and the links to Cuba and reveals, for the first time, a plausible admission of involvement.

What listeners say about Not in Your Lifetime: The Assassination of JFK

This book not only makes you rethink the JFK assassination but every American conspiracy that there has been. It is truly a good book in one that I recommend anyone who is not into conspiracy theories. Each person mentioned in the JFK conspiracy becomes more unknown and mysterious from what you were originally told.

Must read book. Full of information. Should be taught in school! The author tries to cover all the possibilities.

A good starter on assassination who's who

Being that this is a revision of an older work, it could've become something better than "Conspiracy" was. It is a better work, but it breaks no new ground. This might be a good book for someone who knows little about the case who needs introduction.

excellent presentation and some new facts

terrific work of research on a very complicated topic. quite compelling and interesting 4 knowledgeable assassination buffs

This is the fourth book on the Kennedy assassination I have read (or in this case, had read to me) and despite also watching just about every documentary I could lay my hands on only now do I feel like I know all the facts and am able to make an educated assessment of the events of that faithful day in Dallas.

Books reviews aren't really my thing but I'll go ahead and say that if you have an interest in the JFK assassination and have your own theories but don't really know all the facts then I cannot recommend this book enough. One of the few that doesn't seem to have an agenda.

On a side note I'm gonna miss the narrator now it's over.

Loved it'~thought provoking, sad, informative and challenging. Leaves so many questions and anger that public bodies act intheir best interests and not the people's.
Would recommend this in a heartbeat.

I loved it, a truly intricate and convoluted story that rivals the best fiction. Fabulously narrated

Clear, concise. A must listen.

Brilliantly narrated. It's an engrossing listen. Having read and listened to many JFK assassination books this stands at the top with only a select few. Amazing research on the part of the author. Do Not Miss This Classic.

The best book on the JFK Assassination

Judicious and balanced, this is by far the best book I have read on the assassination of JFK. Mr Summers is neither a debunker nor a conspiracy theorist by outlook, but an investigative journalist of integrity. I remember reading one of the earlier versions of this book in the early 1990s, and I am impressed by the way that Mr Summers has kept the narrative fresh and responsive to recent developments. The audiobook is also extremely well read.

I had already purchased the kindle version of this book but it was a good idea to have the audible version as well. It is very, very detailed and well researched, so much so that it is better to listen to it in a quiet room where nothing can distract you rather than listening to it in the car. If anyone believes Oswald was simply a nut, you need to listen to this book. If half the facts are true, it is absolutely obvious that Oswald was not alone in planning the assassination of JFK. Very well narrated.

Having read loads of books and information about 22.11.63, this book informed me more than I could imagine. Factual and detailed, it's one I'd get if I'd just started researching.

An average listen at best

Personally for me, this audible book focuses on nearly every theory that could of occurred in the conspiracy of JFK's death. I did not enjoy the book as I do not believe Cuba or the mafia had any involvement in his death. If you are still undecided on who you may believe was involved in the death or it is your first audible book on this theory then you may enjoy. If like me you have read other books and watched various documentaries then I would avoid it.

2013 review and study of the JFK Assassination

That said this is a worthy enough book which plots its well evidenced way through the majority of the storyline. The Oswald alleged visit to Mexico part is very well researched and explained. The author very much sticks with the known facts and avoids outlandish theories. Disappointingly there is nothing about the curious goings on re the JFK medical evidence or the Zapruder film.

This book is very professionally and well narrated although I must confess I did miss Noah Michael Levine from Accessories after the fact.

If anyone who can read this book and still have any doubts as to the fact that there was a conspiracy. I would worry about your sanity.
great book.