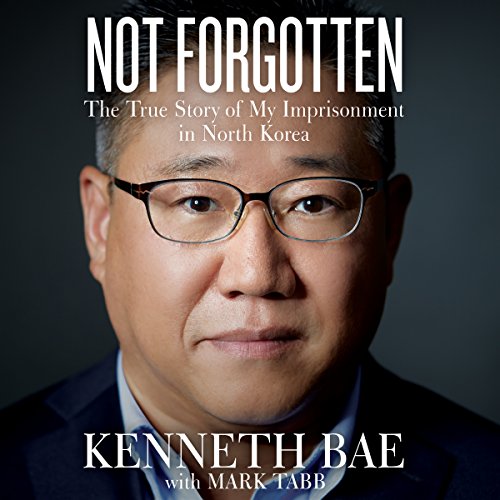 For the first time, Kenneth Bae tells the full story surrounding his arrest and imprisonment in North Korea.

Not Forgotten is a modern story of intrigue, suspense, and heart. Driven by his passion to help the people of North Korea, Bae moves to neighboring China to lead guided tours into the secretive nation. Six years later, after 18 successful excursions in and out of the country, Ken is suddenly stopped at the border: He inadvertently brought his hard drive, which reveals the true nature of his visits, to customs. He is arrested, brought to Pyongyang for further questioning, and sentenced to 15 years of hard labor. His crime? Attempting to overthrow the North Korean government. He may never see his family again.

Back in America, family and friends rally support by establishing a website and creating a petition for Ken's release. Soon major media outlets decry Ken's unjust imprisonment, bringing needed attention that culminates in President Obama's call for prayer on behalf of Ken at the 2014 National Prayer Breakfast. Meanwhile Ken grapples with his new solitary reality as a captive of one of the world's most brutal governments.

From the first harrowing moments of his ordeal to his release - and even today - Ken never wavers in his love for the North Korean people, even his captors. Not Forgotten is both a compelling narrative of one man's dedication to serving the less fortunate and a modern testament of a missionary forced to rely solely on the god who sent him into dangerous territory. Listeners will marvel at the rare firsthand tour of life inside the most shrouded country on the planet, meeting its people, experiencing their daily lives, taking in the landscape, and encountering the tyranny of a totalitarian regime. With its combined spiritual and secular appeal, this never-before-told story is sure to captivate and inspire listeners of all ages.

What listeners say about Not Forgotten

An interesting story if you can sort through the noise

At times it is hard to tell if Kenneth wrote this book primarily as a piece of religious propaganda or an account of his time in DPRK. There is a fascinating story and look behind the scenes underneath it, but unfortunately there’s as much fantasy in the religious lessons and anecdotes in this book as there is in the DPRK’s official state history about its leaders. If he ever decides to give up preaching I’m sure he can get a job writing propaganda for the Kim family. It does spoil it a bit to read obviously fabricated stories of miracles and his bizarre conclusions about the meaning behind events, and his condescending attitude towards people who he decides have been brainwashed into idolising and loving their leader (the irony is real). However, the story is unique and if you’re interested in the DPRK and have read more widely much of it seems to check out... and it is one of a kind.

not enough stories too much Bible verse

to be honest I did not finish the book I only went to chapter 5. I felt that the story had too much preaching between the stories. it made it very hard to focus on the actual story

What a testimony of faith! It's so awesome to see how relying on God got him through such difficult circumstances.

This was a great story. Unbelievable that it took place just 2-3 yrs ago. It is always good to hear about real stories of people and faith, and what sacrifice looks like.

Both the writing itself and the narration were superb! The narration is humorous which makes it all the better.

Even though I am not religious and don't agree with some of the religious conclusions that the author draws, I respect his open-mindedness in learning about and understanding the North Korean point of view, one so different from the West that many people fail to even want to try to understand. Kenneth treated everyone as a human being and with kindness, which is a quality we need more in this world. Regardless of the reasons of his actions, whether you are religious, his actions deserve a lot of respect.

This is a much more pleasant book, filled with kindness, to read, than some others such as Suki Kim's embarrassingly narrow-minded book. Skip that one - you won't be sorry - I was sorry I listened to all of it. Get this one.

The story is good. But the narrators voice did not fit. It did not "put you there". It was overly relaxed and too American for being told by a Korean man who wasn't an American till he was a 16. I wish I had read it instead of listening.

Loved it! Easy to read or listen to. Felt like I was watching it in a movie due to great description of everything. Motivating and faith growing. Absolutely amazing!

The Lord is Good!

This is one of those books that you will want to read again and again, especially when one finds themselves in a bind or situation that causes great hardship. As a born again Christian, people ask me questions about God and why, if there is such a being as God does He allow bad things to happen. Through the years, I have gotten better at answering this question, displaying the answer and have been more compassionate with the people who ask, always giving praise even in the hardest of times. There is a line in this book that will stay with me forever, "...Sometimes, you are the only Jesus some people will ever see..." I truly, with all my heart, believe this. But, as Mr. Bae felt low and wondered if he was forgotten about, we all feel this way from time to time. Along with my Bible, this is the book I also plan to turn to when feeling low. I will continue to pray for Mr. Bae's Godly works and for the people of North Korea. 🙏

Interesting story about an American wrongfully charged in Korea and how his faith carried him through this terrible ordeal.

The Narrator's standard dialect and very slow pace just didn't match the story and actually took away from the experience.

I found the writing repetitious at times.

Overall, never once did I become disinterested in this thought provoking book. I hadn't realized just to what extent the Korean government works to control their citizens' thoughts and actions.

I needed to hear this!

Great story! Great mission! Great God! Love how Kenneth stopped praying for God to rescue him from the situation and started praying for God to use him, and how that was a turning point in his 2 year prison ministry deep in the heart of North Korea. Praying daily for these people to know The Way, The Truth, and The Life. Thank you 103 for your faithful service! Well done Brother!

very easy to get captivated by the events. insider's view into North Korea and US relations.

If you want to learn about life in North Korea... this is not the book for you.

I bought this book hoping to learn about life in North Korea and about man's ability to endure harsh treatment. However this book seems primarily about one man's love of God... which is fine if you're into that kind of thing... but not me and if this was stated from the outset I wouldn't have purchased it.

There's the makings of a great story in here but Kenneth decided to focus on his love of God rather than giving real insights into a fascinating and cruel dictatorship.

At times there's a bit of an insight into what Kenneth had to endure but the sickly sweet narration hid any of the horrors of endurance.

If you're into Jesus I'm sure you'll love this. I didn't.

A little heavy on God, but an incredible story!

An incredible account of survival, patience and the human spirit - though it was a little too religious for me, it was clearly a message Kenneth wanted to share and what kept him going, therefore I have no right to judge.
an incredible book and a fantastic narrator! highly recommended!

Another compelling story from North Korea

I have listened to many books about North Korea. This book was very interesting but I found the narration difficult to listen to and the repeated biblical quotes for some reason irritated me.
Never the less, this almost unbelievable story is well worth a listen. This man has incredible strength.