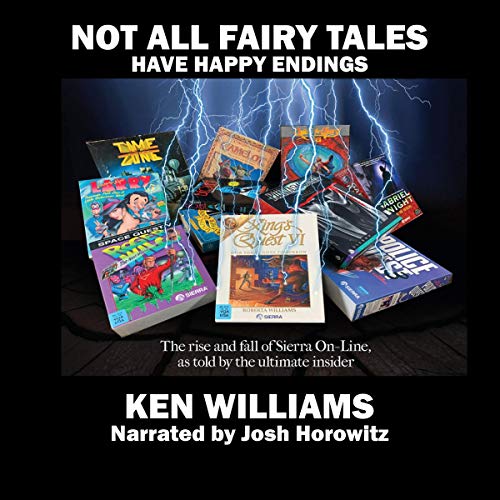 Not All Fairy Tales Have Happy Endings

Sierra On-Line was one of the very first computer game companies and at one time dominated the industry. The author, Ken Williams, founded Sierra On-Line with his wife Roberta who went on to create many of the company's best-selling games.

Sierra grew from just Ken and Roberta to over 1,000 employees and a fan base that still exists today, despite the fact that the company was torn apart by criminal activities, scandal, and corruption that resulted in jail sentences and the collapse of Sierra. This is the behind-the-scenes story of the rise and fall, as it could only be told by the ultimate insider.

What listeners say about Not All Fairy Tales Have Happy Endings

First off, I want to call out the narration, its excellent throughout.

The book covers the early years of Ken and Roberta Williams (mostly Ken), and their journey through the dawn of video games, to being merged into a global conglomerate.

My childhood was filled with the early Sierra games on my IBM compatible computer in the early 80s. Its great to hear how that all came about, and what things had to be done to rise to be the stars that they were.

Criticism - The book has its faults though, the pacing is a little off, and the interludes are distracting. This is one part story of the rise and fall of Sierra, and one part Self Help book. The Self Help parts.. im not a big fan of. Ken has a lot of traits that worked for him, but i think a lot of it was being in the right place at the right time and taking some initiative. A lot of his management advice is actually.. pretty terrible. I'd never work for him.

Still overall, a great book that I would recommend to anyone who was playing Sierra games since the 80s.

A Good Trip Down Memory Lane

While it was nice to hear the history of the company that made so many of the games I loved as a child, I would’ve loved to have heard more about those games, and less about the business or conflicts in building the Sierra empire.

But, if you are into the business side of a gaming company, or want to hear thoughts from one of video games’ greatest founders, it’s a good book.

The narration, however, is that bland, uninspired style that we have come to expect in too many works of non-fiction. I know they all can’t be Wil Wheaton, but I am tired of the same old anemic sound.

I received a free copy of the audiobook to review. I will try to be as unbiased as possible, but full disclosure I grew up with Sierra. I played SQ, KQ, EQ, The Realm, QfG, Dr. Brain, TIM, PQ, BaK, BiA, PAiT, LSL, Hoyle, CoL, RB, TP, and a few others.

That should put me in square in the middle of a relatively small target audience. However, I feel that the real target audience is even closer to home. It feels like a book written for Ken Williams’ family, friends, and former employees. Those that experienced Sierra firsthand and may have lingering questions as to what exactly happened and what Ken Williams was thinking with his decisions.

The book feels almost like a conversation with him. Or more accurately, listening to him tell the story of his life. He reached out to friends for details or googled information more often than exhaustively researching facts. If there was something he couldn’t remember, he said so. He talked about several choices throughout his life that he would probably make differently now, but he stood by his choices. He acknowledges that he wasn’t always right, that he was cocky, that he wasn’t easy to work for, and this book is his side of the story.

It makes for a fascinating memoir. I mean, he was almost a household name. Sierra had so many firsts... graphical game, online game network, IBM compatible game, game on CD, game using a music card, online casino, personal finance software, BASIC compiler, etc. If he had made one or two choices differently, he would be a Steve Jobs, Bill Gates, or Jeff Bezos. Several books have been written about those that made it all the way to the top, but how many memoirs have been written by those that were this close?

Probably a lot, actually. But there are a lot of biographies on my TBR list, and they’ve been there a while. I read this as soon as I found out it existed, and I enjoyed it.

This book will bring you back into your childhood and the birth of the computer adventure game. So many great memories come back to me as I flip through the pages.

An intriguing history of the business

Disclaimer: Was provided a free code by the narrator to listen to and review this audiobook

I grew up in the 80s and Sierra adventure games are some of my first memories of pc gaming. In fact the first game I played through the night to sunrise was Kings Quest. I played just about every series Sierra came out with and loved to read about behind the scenes of how the games were made.

Didn't know what to expect from this book, but was not disappointed in what Ken Williams shared regarding the story of the company. I lost track of them in the mid 90s and didn't actually know the company had folded, but the story was an interesting one and brought to light considerations around the ipo process and takeover that I never imagined existed. The stories about the other tech visionary giants of the time were also neat to hear. Sierra definitely grew up and blossomed during the dawn of personal computing. and their story is one intertwined with the rest of the industry.

Didn't necessarily enjoy or agree with some of the personal beliefs of the author, but appreciated the honesty and insight into what made the business tick. The narration was excellent and kept me engaged during sections of the story where my attention was apt to wander.

I would have loved to hear more about the design process and technical challenges, but some of that is there and the rest of the story is one that I'm glad I heard. If you played or have an interest in Sierra adventure games and have any curiosity about the early story of the founders and how the business was run then definitely give this one a shot!

A interesting look at a pioneering company...

Ken Williams gives an inside view of the history of Sierra On-Line, interspersed with business and management advice. Before coming across this book I wasn't familiar with the company but found this story engaging and a fun read.

I'd recommend this book for anyone with an interest in the early days of the personal computer and the gaming software that group up with it!

While I loved it, It might not be for everyone

I grew up with Sierra games and owned so many of the series. I was aware of the of the decline of Sierra but wasn't sure of what caused it. I was eager to read this book to get a great understanding of what had happened.

Cons -
* Ken mentions he often repeats stories....and i could see that with the book. A few stories were told multiple times.
* The interlude chapters were distracting from the history chapters at time. I'm sure they were meant to break it up a little but i would have liked more chapters of history chunked together I think for continuity sake in my head.
* I was hoping to hear more about some of the other games that I loved. I was a huge Quest for Glory and Space Quest fan and he barely mentioned them at all.

Overall, I enjoyed it and I hope you find this review helpful.

I wasn't sure I would like this book but I very much enjoyed it. I graduated high school in 1980 and took computer programming in college so it brought back a lot of nostalgia. I would recommend it!

I love finding new directions, narrators and authors for my listening.

This reminds me a lot of masters of doom. The narration is excellent and I hope to listen to more from him. If you are reading this....do some sci-fi or cyberpunk!!!

The book itself is a fascinating insight and I love the honesty of it all. The author shares so much of his life and I feel as though I learned a lot about a lot of things, not just the games industry but about people.

Not outrageous like masters of doom but just as awesome.

I hope this book gets some attention and people enjoy it as much as me.

Needs an editor and co-writer

On paper this sounds like an easy sell right? Sierra On-Line who were responsible for many loved classic games and were groundbreaking in many ways. Who wouldn’t want to read a history of the company and why it ended?
The problem is that you are getting too much of Ken’s life prior to and after Sierra and not enough about the creative part of the company and the games. When the writing is about Sierra On-Line, it concentrates more on the business aspect rather than the creative aspect.
The narration is fine, but can’t redeem the basic problems with the text and the content. If Ken Williams had written this book with a professional writer and strict editor, it could have been a better read, but as it stands, it comes across as very amateur writing that grates at times.
Full disclosure, I received this audio book for free in return for an honest review.

I enjoyed this book from 'cover to cover'. Also, the narration is great. Recommended listening for anyone interested in the subject.