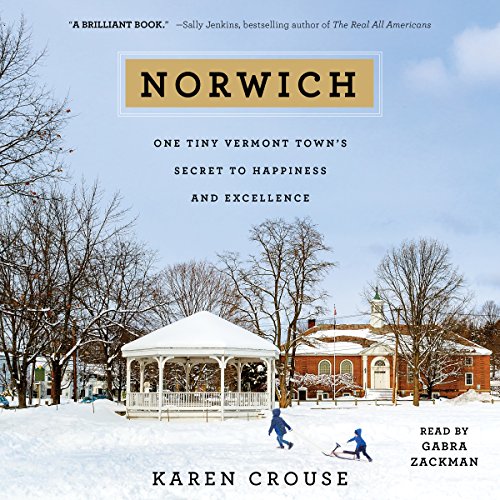 The extraordinary story of the small Vermont town that has likely produced more Olympians per capita than any other place in the country - and whose citizens provide a model for achieving excellence while leading a well-rounded life.

Norwich, a charming Vermont town of roughly 3,000 residents, has sent an athlete to almost every Winter Olympics for the past 30 years - and three times that athlete has returned with a medal.

How does Norwich do it? To answer this question, New York Times reporter Karen Crouse moved to Vermont, immersing herself in the lives of Norwich Olympians past and present. There, amid the organic farms and clapboard colonial buildings, she discovered a culture that's the opposite of the hypercompetitive schoolyard of today's tiger moms and eagle dads. In Norwich, kids aren't cut from teams. They don't specialize in a single sport, and they even root for their rivals. What's more, their hands-off parents encourage them to simply enjoy themselves. Making it to the Olympics is seen not as the pinnacle of an athlete's career but as a fun stop on the way to achieving other longer-lasting dreams. Norwich, Crouse realized, wasn't just raising better athletes than the rest of America; it was raising happier, healthier kids.

Full of inspiring stories of Olympians who excelled on and off the sports field - and had a blast doing so - Norwich is the book for every parent who wants to raise kids to be levelheaded, fulfilled, and successful.

What listeners say about Norwich

Norwich is an amazing town but not the "only" one.

I read this book because my cousin has lived in Norwich for over 20 years so I have spent many holidays and other visits there. There's no doubt of it's beauty, close-knit community, and obvious athleticism. Given it's natural environment, most people move there to enjoy the outdoors, thereby attracting many athletes. A well-educated, ambitious group of athletic/outdoor enthusiasts is bound to produce some star athletes although the number of Olympians produced by Norwich is impressive. However, given the number of Sailing Olympians produced by Marblehead, MA, and Tennis Professionals from the same town in Russia (read Malcolm Gladwell), for example, I don't think Norwich corners the market for producing successful athletes. Nor is it the only place where a 3rd grade teach might hold onto a token from a child who shows early promise. Nonetheless, Norwich is a special place to raise athletic children... just like many other towns worldwide.

Very easy to pick up and read/ listen to when you have the time. Good collection of the backgrounds of Olympians formerly prospective Olympians all originating from the small town of Norwich. Enjoyed the read, but to me, lacking further depth (perhaps that's a good thing)