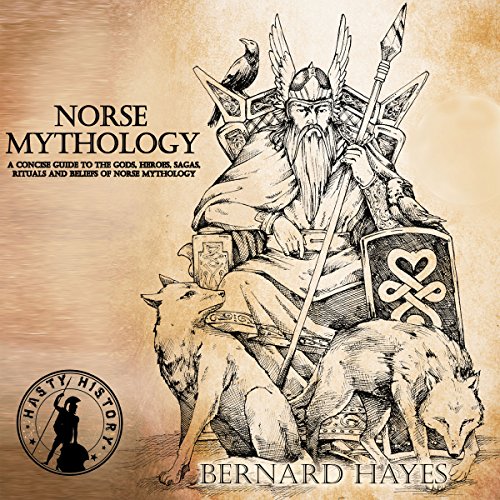 In this audio book, Norse Mythology: A Concise Guide to the Gods, Heroes, Sagas, Rituals, and Beliefs of Norse Mythology, the listener will be transported to the ancient customs of beliefs of the ancient Vikings of the north. This audiobook is dedicated to exploring the gods and goddesses that the Nordic people worshiped.

The Nordic people had many heroes of myth and legend, and you will be introduced to both stories of myth and living, breathing Viking heroes that were revered. Norse mythology is intricate and complex, and the ideals behind their mythological beliefs were often intertwined with real life events. This audiobook will examine how both myth and fact contributed to the culture and traditions of the Nordic people, and how these influences and stories continue to live on throughout the centuries!

The narrator was hard to listen to at her regular speed, and her inflections weren't the best. The stories were over simplified and held true to too many Christian- converted ideals, and left out so much of the beauty of the Sagas. the only redeeming quality was the depiction of the theology behind Yggdrasil

A Concise Guide definitely is a fitting description of this book. I felt like I got the bread, but was left wanting a little more of the meat and sauce for a complete sandwich. Still a decent resource. The narrator was clear while bordering on sounding like a pleasant computer that was instructed to use plenty of inflection in her speech. Didn't learn anything new. It could however be a starting point for a beginner. Though again, I'm not sure if it creates an appetite for more as much as it leaves the listener with one. Feels a lot like an attempt to give a broad view of a world through a keyhole.

I thought this norse mythology story book was awesome. Norse myths and gods are tough and complex. I liked it.