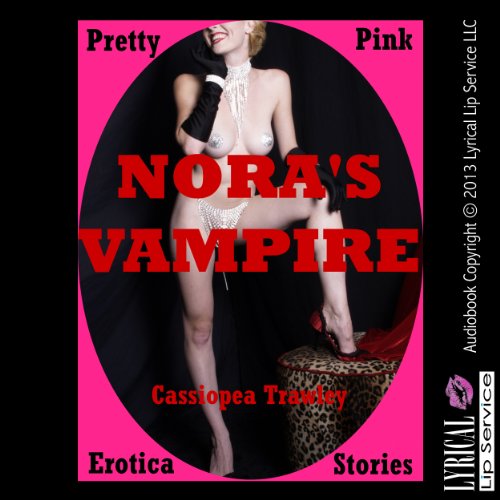 Nora is a young art student far more interested in sketches and painting than love, but she can't get the strange man across the street out of her mind. Why does he sit for hours at night outside on his porch, and why when he's obviously strong does he allow himself to be bullied? What's the secret he hides? She discovers soon enough that Alex is far more than he seems, a vampire living a tragic and remorseful life. As she grows to love him, she discovers his body offers as much as his mind.

Warning: This audiobook contains very explicit descriptions of sexual activity during a paranormal sex encounter. It includes vampire sex, oral sex, and rough sex. It is intended for mature readers who will not be offended by graphic depictions of sex acts between consenting adults.

“Nora please, please don’t be scared or upset.” He followed her halfway to the door then fell to his knees and almost in tears said, “I love you Nora.” She stopped for a moment then left, closing the door behind her. But she still stood on the other side of the door, taking in all that had just happened within seconds, especially his last words. She didn’t know what to do, whether to leave or go back in. As she always went with her instincts, this time they led her back in. Alex was still kneeling with his head down. She walked to him and sat down then took his hand.“I trust you.” She said calmly, even though her heart was pounding against her chest. He looked at her and narrowed his eyes. “You, really mean it.” He said softly and smiled, his eyes started sparkling with love. She nodded. He moved forward, picked her up and kissed her. She giggled and kissed him back. Nora wasn’t reluctant to show Alex she really wanted to be with him. She pulled him close as he set her down on the couch. He lifted her dress and kissed her navel as she pulled off his shirt. He unzipped her dress and slowly peeled it off her body, kissing every inch it revealed. She held him by his neck and ran her hand down his back. She felt his dick bulging through his pants and rubbing against her thigh. Their breathing grew faster now. He slipped her panties down and licked her thighs all the way to her pussy. She closed her eyes and bit her lower lip as he frantically sucked her pussy hard. His tongue found its way in and he twirled it inside rubbing his nose on her clit. She grasped his hair and clenched her teeth at the pleasure, moaning softly.

What listeners say about Nora's Vampire