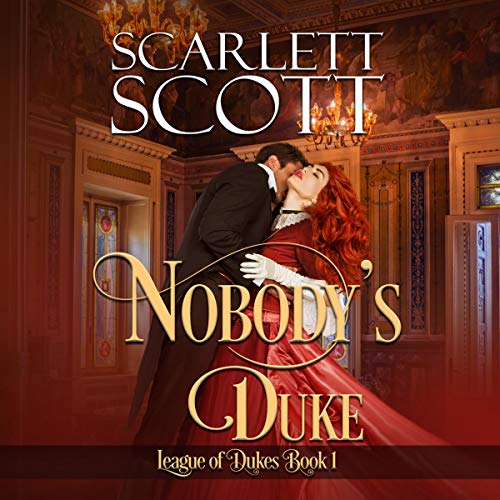 When the dangerous men who killed her husband in a political assassination threaten Ara, Duchess of Burghly, the Crown assigns her a bodyguard. But the man charged with protecting her is no stranger.

He’s Clayton Ludlow, the bastard son of a duke and the first man she ever loved. Eight years after he took her innocence and ruthlessly abandoned her, he’s back in her drawing room and her life.

This time, she’s older, wiser, and stronger. She will resist him at any cost and make him pay for the past.

She’s the only woman Clay ever loved and the one he hates above all others. When Ara brutally betrayed and deceived him, leaving him with a scarred face and a bitter heart, he devoted himself to earning his reputation as one of the Crown’s most feared agents.

He wants nothing more than to finish his assignment so that he can remove all traces of her from his life forever. But walking away from her for good won’t be as easy as he thinks.

As secrets are revealed and danger threatens Ara, Clay discovers that the truth is far more complicated than deceit. Once she’s back in his arms where she belongs, he’ll wage the biggest fight of all to keep her there.

Enjoyed this book...will listen to the series.

An interesting story line (I think it could have been a bit 'meatier' in regards to the intrigue and murder), lovely narration and a happy ending. Great for a long drive in the car - kept my attention.

Could have been a good story but way too much repetitive jabber. Not even the great Rosalyn Landor can save it. Sad since there was a good sub story with the Irish terrorists plot, but it was underused. The Irish plot could have been a way to flesh out the story so it would not have needed to keep repeating how each H/H hated the other and had been betrayed. I got that in the first few chapters. Also WAY TOO MUCH inner thoughts. The characters were constantly being told they were distracted. Not horrible but glad it was part of the romance package so I didn't need a refund.

There are 3-7 sentences of inner musings for every sentence of dialogue. At this ratio, I often forgot what the characters were discussing. Too bad, since all that extra stuff diminishes what is at its heart a great book. Not even the considerable talents of Rosalyn Landor can make up for the overgrown prose of this one. Could comfortably be boiled down to an excellent 4 hour listen.

Oh my, how I enjoyed this book!

This is my first audio book by Scarlett Scott, but I can assure you it will definitely not be the last. An awesome love story that held me spellbound to the end with all the intrigue and angst. I fell in love with the characters from the start. Well written book and beautifully narrated by Rosalyn Landor. Highly recommended

I read the reviews about the redundancy and while there was some, I believe the preformance of the narrator outweighed it for me. Great storyline, would have been nice if it reached the punchline a bit sooner. Still recommending as a listen.

What a story. Breaks your heart but puts it all back together again. Love how it flows into the next in series

Story was a bit dragging until chapter 17. As for the narrator, I didn't like Clays voice at all. I will not continue the series.

Every thing you could want in a romance!

I picked this book as although I have not come across Scarlett Scott’s books before, Rosalyn Landor is an amazing narrator and ALWAYS manages to make the Men sound so masculine and brings every character to life!

But I will DEFINITELY be reading more Scarlett Scott books!! There was Drama, mystery, romance, murder and intrigue in bucket loads!! And blimey!! The sex scenes were the steamiest I have heard!! If you want full on Masculinity at its best with every chapter jammed packed with excitement... then this is one of the best I have heard!

Bravo Ms Scott - you hit the nail on the head on every level!!! x

As usual Rosalyn Landon brought the storyline alive. Worth listening to the end although storyline dragged out a little too much and I found myself fast forwarding several times. I can’t get enough of the narrator so now search under her as opposed to author.