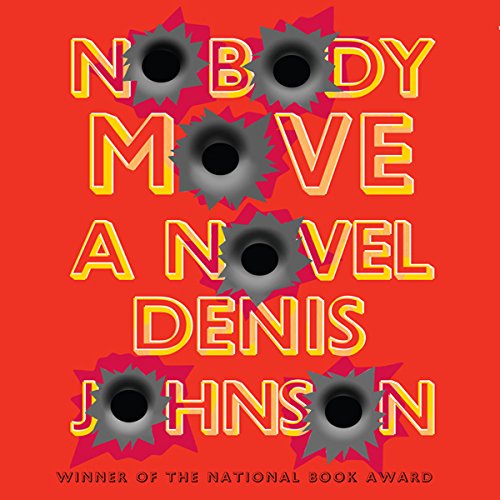 By: Denis Johnson
Narrated by: Will Patton

From the National Book Award-winning, best-selling author of Tree of Smoke comes a provocative thriller set in the American West.

Nobody Move, which first appeared in the pages of Playboy, is the story of an assortment of lowlifes in Bakersfield, California, and their cat-and-mouse game over $2.3 million. Touched by echoes of Raymond Chandler and Dashiell Hammett, Nobody Move is at once an homage to and a variation on literary form. It salutes one of our most enduring and popular genres - the American crime novel - but does so with a grisly humor and outrageousness that are Denis Johnson's own.

Sexy, suspenseful, and above all entertaining, Nobody Move shows one of our greatest novelists at his versatile best.

What listeners say about Nobody Move

This was a huge disappointment. Only Patton's narration saved the story. Too strange for my taste.

First of all, I don't understand why the other reviewer refers to this as a Christian religious book. It isn't.

If this book was a film it would be considered "Film Noir." I enjoyed the author's writing style. That being said, I didn't think much of the characters. The most likable of the bunch are the American Indian girl and the gambler... and that's not saying much. Also, without giving it away, I'd have to say that when the book ended I found myself unsatisfied.

less than meets the eye

Would you try another book from Denis Johnson and/or Will Patton?

Yes, I have read two books by Denis Johnson -- Tree of Smoke and Fiskadoro. I like both, especially Tree of Smoke, so when a friend told me he had written a noir book, I was eager to try it. Big mistake.

As for Will Patton, I thought his reading was fine. His presence on another book would not sway me either for or against.

What was most disappointing about Denis Johnson’s story?

The action was not particularly engaging. It was hard to keep the characters apart, even though there weren't that many of them. And the ending was completely ridiculous -- pretentiously ambiguous when it should have just tied up the various threads.

What character would you cut from Nobody Move?

The main character. Yes, I know, this is a problem. But I cannot see what he added to the plot or the ambience of the piece.

Read Tree of Smoke instead. It's a way better book.

I couldn't finish it. I had no idea it was a christian religious book when I downloaded it.