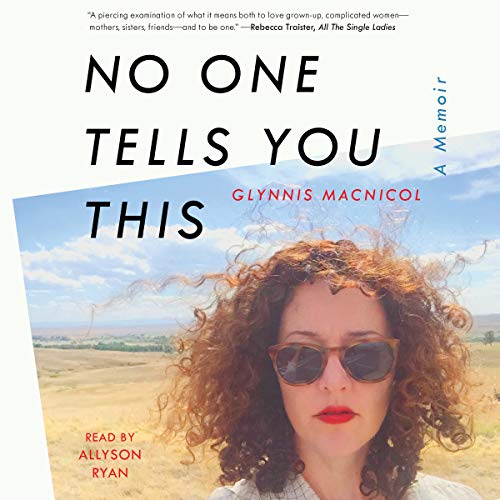 No One Tells You This

If the story doesn’t end with marriage or a child, what then?

This question plagued Glynnis MacNicol on the eve of her 40th birthday. Despite a successful career as a writer, and an exciting life in New York City, Glynnis was constantly reminded she had neither of the things the world expected of a woman her age: a partner or a baby. She knew she was supposed to feel bad about this. After all, single women and those without children are often seen as objects of pity, relegated to the sidelines, or indulgent spoiled creatures who think only of themselves.

Glynnis refused to be cast into either of those roles and yet the question remained: What now? There was no good blueprint for how to be a woman alone in the world. She concluded it was time to create one.

Over the course of her 40th year, which this memoir chronicles, Glynnis embarks on a revealing journey of self-discovery that continually contradicts everything she’d been led to expect. Through the trials of family illness and turmoil, and the thrills of far-flung travel and adventures with men, young and old (and sometimes wearing cowboy hats), she is forced to wrestle with her biggest hopes and fears about love, death, sex, friendship, and loneliness. In doing so, she discovers that holding the power to determine her own fate requires a resilience and courage that no one talks about, and is more rewarding than anyone imagines.

Intimate and timely, No One Tells You This is a fearless reckoning with modern womanhood and an exhilarating adventure that will resonate with anyone determined to live by their own rules.

What listeners say about No One Tells You This

Not quite what I expected.

There is a lot I liked about this book. MacNicol really reveals a lot about her thoughts/worries about things we all struggle with but don’t often discuss. I really appreciated some of the personal moments that she shared.
However, there are also a lot of times that the book would lose my attention. I sometimes had a hard time following the order of events as the book isn’t quite chronological. Also, there are times when she would go into great detail about things and I don’t quite know why. It feels like there is a lot of filler, but maybe I just missed the bigger picture.
Overall, I found it interesting. It is a good story about a woman figuring out what she really wants in life. I’m just not convinced that she has it all worked out yet. I’d like to hear an update later in her life.

I should also add that the narration was great. The whole audiobook was delivered like a casual conversation with just the right emotional inflection.

Long on Details, Short on Insight

I read this book for both personal interest as someone choosing not to have children and left wanting more. Glynnis' prose leaves much to be desired and the story is mediocre at best. This feels more like a desperate attempt to convince herself that she is making the right life choices rather than a true exploration of this highly existential topic. The saving grace of this book is the insight it provided me, a male listener, into the world of women who wrestle with this decision. An important topic, no doubt, but I wish the torch bearer of this subject was willing to go deeper.

this is not about a woman turning 40 - this is about a woman who is super super privileged who's the product of her own misery and needed to hear the sound of her own voice out in the public world. it's boring, it's unoriginal. I don't know anybody that can relate to this story.

While I understand that this is a memoir, unfortunately I found it rambling and navel-gazing. I didn’t find it particularly insightful. The narrator, however, is good and has a range. I hung on until the end since I was listening to this on a road trip but it just never delivered anything useful or compelling. Save your money or credit.

Life should not be lived in Someone Else's Shoes..

Thank you, Glynnis, for sharing your story with us. It was a page turner (albeit, I was listening via Audible). Allyson Ryan did a great job narrating your words -- effortlessly taking on the many voices in your story. I'm totally into memoirs at the moment and appreciate the way you have an ease in your narrative, a sense of humor and have realized that other peoples life choices are not necessarily a healthy metric to compare your self worth to. Entering your 40's is definitely a liberating time. Each decade brings it's own Trickster Shadow side. BTW -- I didn't have children and I'm just fine about that. I was married for 25 years and widowed 8 years ago when my husband was only 58. The journeys of each person carry with them the weight of the world -- as well as the freedom to forge new ways of being that work best for them. Thank you for your willingness to explore yourself and I hope you continue to pat yourself on the back for coming to the conclusion that you are a Badass and taking no prisoners! Your 40's inspire that -- although you seemed to have come to that conclusion on your own way before that! Congratulating You for being Fierce, Feisty and Fabulous!

this story inspired and reassures me about my own path. it made me hopeful for my future. a little less sacred to carry on to the untraditinal life path ı have chossen. To not be so judgmental of those who have chosen the "traditional lifestyle " I didn't want the book to end.

Slow, thoughtful, and exactly what I needed

Glynnis tells stories from her life that slowly open up to reveal beautiful perspectives that I found helpful in my own life. It’s comforting to hear someone else have a similar (but much more eloquently expressed) inner dialogue about what it means to lose your mother, not have a husband, and not have kids while turning 40. These are topics a lot of women deal with but don’t talk about. I recommend it for anyone thinking through those things too.

I hung in there too the end, waiting for something interesting and insightful to happen. It didn't.