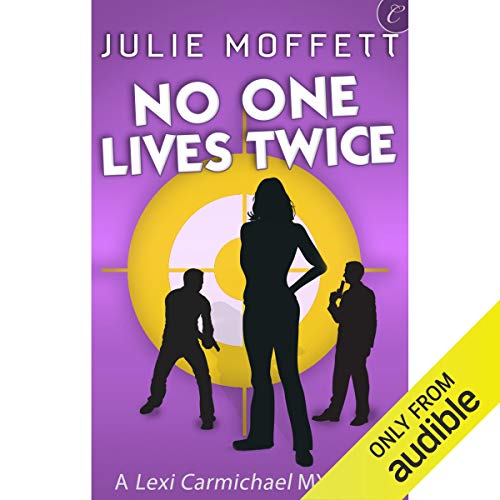 No One Lives Twice

No One Lives Twice

"I'm Lexi Carmichael, geek extraordinaire. I spend my days stopping computer hackers at the National Security Agency. My nights? Those I spend avoiding my mother and eating cereal for dinner. Even though I work for a top-secret agency, I've never been in an exciting car chase, sipped a stirred (not shaken) martini, or shot a poison dart from an umbrella.

"Until today, that is, when two gun-toting thugs popped up in my life and my best friend disappeared. So, I've enlisted the help of the Zimmerman twins - the reclusive architects of America's most sensitive electronic networks - to help me navigate a bewildering maze of leads to find her.

"Along the way, my path collides with a sexy government agent and a rich, handsome lawyer, both of whom seem to have the hots for me. Hacking, espionage, sexy spy-men - it's a geek girl's dream come true. If it weren't for those gun-toting thugs...."

Great story, well paced, well narrated. It was serious in the right places and funny when appropriate. The espionage is light but not in a bad way. I don't like overdone romance and this had just enough to keep things interesting without being over the top. This was a fun listen and I can't wait for more by this author, hopefully continuing the characters in this story.

I am pretty picky about narrators and almost didn't get this one because of the reviews. I'm glad I got the book anyway because it was a fairly fun read, and the narration wasn't bad enough that I returned the book without even finishing it (which I have done a few times). This narrator wasn't even bad enough that I plan to go for the print version of any book she narrates that I'm interested in, which I do for some narrators. That being said, I should mention that my biggest pet peeves are over-acting and weird voices, like when someone reads in a voice that is too breathy or childish or whatever. This narrator spoke in a normal voice. Though she often sounded like she was reading a cue card (which I guess she sort of was) instead of sounding like a friend telling a story, her acting wasn't over the top, just not oscar-winning. I can live with that, along with a few mispronunciations I noticed.

HOWEVER, if bad accents are a particular annoyance to you, DO NOT get this book - it will make you want to jump off a bridge. There were many characters of various nationalities in this book, so there were many accents to perform. I wouldn't expect any narrator to get them all perfect, but this one sounds like her only exposure to non-American-accented English was from old Dracula movies.

Good Story Line- Narrator is not THAT bad

What made the experience of listening to No One Lives Twice the most enjoyable?

I liked the narration. She did do a really bad Italian accent, but I thought her voice was pleasant and easy to listen to- the other accents were GREAT!

I liked that Lexi could laugh at herself.

As above the performance was GREAT except for the Italian accent.... It sounded a little more like Dracula... but otherwise I thought she did a good job

Thoroughly engaging heroine! A woman with a brain who takes charge. I loved it.

I enjoyed the plot of the book. It was compelling and draws you through. The mystery intriguing. However, the main character's reactions to situations are SO unrealistic that it's a bit distracting. Suspension of disbelief is expected on some level but come on. You can't be that naive and able to roll with threats of violence so easily...even at 25. Humans just don't work that way.

a hacker that can't google

I liked the first book (book number 0.5) but in this book she doesn't show any common sense and couldn't use a computer to find a single piece of information. Weird for a hacker. And she didn't even have the smarts so not use a cell phone given to her from a bad guy. I'm done with this series.

Would you try another book from Julie Moffett and/or Kristin Watson Heintz?

The writing is not bad but the story requires too much suspension of disbelief. No one working for the NSA would be stupid enough to fail to report she had been held at gunpoint twice in the same day especially when she has a cop for a brother. Using such a ploy as a springboard for a story is all too common and it ruins any sympathy I might have had for the character. She tells her friends but doesn't tell her superiors in one of the most powerful agencies in the world?!The story is full of unbelievable contradictions that soon had me picking it apart and becoming disgusted wondering if it had ever been read by an editor and that's not something I've done very often.
Kristin Heintz did a good job and I would listen to her again.

Would you ever listen to anything by Julie Moffett again?

As I said, the writing wasn't bad and I think the author has potential so, yes, I would consider giving her another go but probably not with this series.

Nothing in particular stood out but I didn't finish the book

There is too much to list. This book should have been gone over by an editor who knew what he/she was doing.

Popcorn mystery easy on the ears

Once I bumped the narration to 1.25, I found this book to be good commuting audio. Like a beach book, if you’re not looking for sharp, robust, or deep and just want unique characters, a plucky heroine and hints of romance (nothing more than a kiss at a time, smattered occasionally in the book) with mildly amusing banter and a mystery where characters matter more than plot, then this book works fine.

All of the different accents were unnecessary and distracting from the story. Unlike some reviewers, however, I didn’t find it so horrible, except for the times I kept hearing Slash’s accent as Count Chocula. Also, the male voices, to me, didn’t always mesh well with the characters. Slash in particular seemed like he was supposed to be more dark and dangerous: he’s a muscled hacker with smooth Italian charm and confident spy moves, but he sounds like a cocky teenager.

I was mildly annoyed by the stupidity of the smart techie heroine. She is attacked outside her parents house and says nothing to them (even though dad could easily bring his powerful connections in); she has a cop brother who she gets to run down a lead but who she doesn’t seek protection from or apparently trust to let in on her investigation; she keeps going back to her apartment after endless break ins; and she works for the NSA but never goes to them for help. Because it makes so much more sense to conduct a complex investigation facing repeated life threatening strangers without the aid of law enforcement.

I think a different narrator would bump this book up to four stars( I would definitely give it a second chance if narrated by Rene Raudman or TG Reynolds) but these will always be nothing more than light, popcorn flicks to pass the time.

As a “free” book to be borrowed under the monthly Audible Escapes subscription, it was worth it. I doubt I will spend the big bucks to purchase the later installments however.

what a nice surprise! Can't wait to listen to the other books in the series!

Story and Narration Both Okay

Best - The storyline is very interesting and I found a lot of it unexpected (in a good way).
Least - Lexi. I wanted so badly to like her, but I think this is all a personal preference. I cannot stand a character that constantly puts themselves down, questioning how they could be so stupid, how they ramble /so/ much, how completely inept that are at clothes and undergarments and makeup (and yet garner the attention of so many "attractive" men). Again, I know a ton of people consider this a story about a great "geek girl" heroine, but the story seemed to focus on how terrible she is at all things stereotypically "girly" and "social", instead of focusing on this really intelligent girl and her skills. I could not figure out how she ended up in such a great job, when the character herself is constantly questioning it. I physically cringed at so many of her interactions, because they were so unlikely to me, and seemed so forced to show "hey, this girl doesn't know how to interact with men or her parents! Isn't she relatable??" I think my expectation for the character of Lexi doesn't match up with reality, which is why I'm so bothered.

I would have liked to see more confidence in Lexi, and less whining. I'm not the author, though, so I have no say in the characters created. I just had different expectations for Lexi.

The accents took me out of the story, and made me very aware that I was listening to someone read a story, instead of feeling like I was totally "in" the story.

Do you think No One Lives Twice needs a follow-up book? Why or why not?

Sure. I probably would not listen to it, but I like to believe Lexi evolves as a character into a more multi-faceted, capable woman!

This could be great, I'll never know because - UGH

This book looks really interesting. The first two hours of listening seemed very promising HOWEVER: THE READER. Kristin Watson Heintz has a tone and style that mimics a woman reading a bedtime story to a (possibly somewhat slow) child. This pretty much kills the sassy, snappy, clever writer of teh author and in the end I just. Couldn't. Anymore. .

This is the first book in the Lexi Carmichael series. It’s a fast paced mystery suspense with exciting twists and turns. There’s a plethora of great characters and a thrilling storyline that’s lighthearted in places. I’ll definitely be continuing with this series. I loved it!