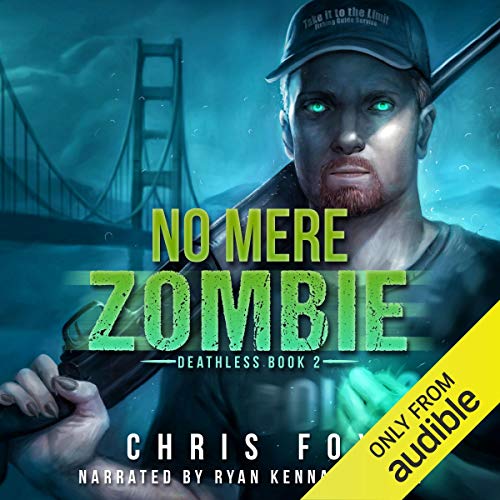 The sun has wiped out nearly all technology in the largest coronal mass ejection in history. In its wake comes the zombie apocalypse. The dead have risen, and they are hungry.

Yet there are greater threats than the walking dead. The deathless have returned, slumbering in the same Arks that carried the werewolves into the present. If they are not stopped they will build a massive necropolis in the remains of San Francisco, and the entire continent will pay the price.

Only the few werewolves created before the apocalypse stand between humanity and annihilation. Yet they are outnumbered and alone. Their only hope comes from the very enemy that sought to stop their creation, Mohn Corp.

What listeners say about No Mere Zombie

Don't have a whole lot of time for the review but it is well deserved. Simply put, if you enjoyed book one then book two will only be that much better because you are already acquainted with the universe of Deathless.

I ate the series up and just a few days, and even though it seemed like he was an up-and-coming writer, it was as satisfying as an indie flick because it was innovative and not afraid to let your mind go on a ride. I enjoyed all the aspects of the book and found it addictive and could not put it down

I Loved this book! l couldn't stop listening. I thoroughly enjoyed the characters as well as how the story is coming together! The first book in the series was good, don't get me wrong, however it left me a little unsure on how the series would play out and if I wanted to stay with it. Again, I liked it but I was a little confused let's say. Well after listening to the prequel & book 2, the author did a great job at tying the story together. Although I strongly recommend Book 1, Book 2, then the prequel. It made more sense in that order for me!

This i probably The Best Zombie/werewolf/vampire adventure i have ever read. Exciting from start to the finish

Awesome... Only way to describe!

Great listen!.. Plot was really good...story had a good flow and made the listen enjoyable. Character development kept you on the edge of your seat. Overall would recommend...a great sequel in the series.

Sounded interesting so I gave it a shot, I am so glad i did. Wish there were more stories like this. All I can say is awesome can't wait for the next one.

Some books in a series lose momentum, these never fail to build. Reread and recommend!

Great continuation in the series. If you liked the first book then purchase this one.

If you like a different kind of zombie book

The follow up novel is excellent and picks right up where the first one ended. The recap the author does if the first novel may just be the funniest thing I have ever heard and worth my credit just for that. As soon as I get my next credit I will be getting the third book. The guy who reads for the audio is first class and I would listen to his audiobooks for many different authors