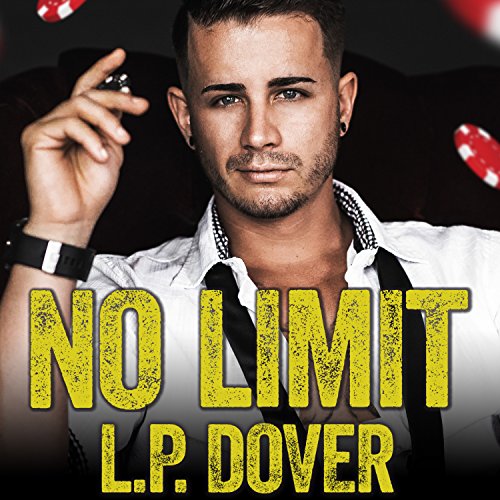 I deal with those things every day. My name is Jason Avery, and I'm one of the best undercover agents in the country. I have yet to fail on a mission, which is why I've been sent to Vegas. Countless women have been abducted, tortured, only to show up dead in the middle of the night. It's my job to find out who is responsible. Unfortunately every lead sends me to a dead end - at least until Aylee McFadden shows up at my door.

Aylee is a stubborn, headstrong FBI agent - and one of the sexiest women I've ever seen with a gun. When she joins me, it gives us the leverage we need to get on the inside. She fights me at every turn but soon realizes there's more to me than tattoos and a dirty mouth. I can't get enough of her. Now that we're in the game, we're one step closer to solving the crime. However, gambling with money isn't what the big boys want. They want the one thing I'm not willing to give.

It's a no-limit game, and if I back down I lose everything. I will lose her.

"L. P. Dover has played her cards right with No Limit. A steamy, romantic suspense that will captivate your mind and steal your heart." ( Bawaka's Book Fair)

What listeners say about No Limit

Vegas Nights of Seduction and Crime

Jason Avery has been undercover in Las Vegas hunting for the murderer who has been gruesomely killing exclusive escorts, when into his life and the case walks Aylee McFadden an FBI agent with a fiery personality and just as headstrong as Jason. I enjoy the banter between Jason and Aylee though there were times when she should have slugged him and to be fair the reverse was also true.

L.P. Dover’s characters, storytelling and flow make for a very enjoyable listen. I was definitely in the mood for a captivating book without all the minute details and descriptions of the crimes and bureaucracy It also has a nice bit of seduction, steam and sex without pushing into the Erotica category.

I thoroughly enjoyed the narrating abilities of Lidia Domet and Eric London. They displayed a lovely sense of timing, rhythm, and emotional depth in their characterizations. I would definitely listen to future books narrated by either together or separately.

really enjoyed the story and characters! had small issue with female narrator and hearing her pause and swallow was distracting. still really enjoyed the book but wanted to mention. will listen to rest of series!

Story line wasn't bad and I think I would have enjoyed it more if it wasnt for the female narrator, between her pausing and constant swallowing I couldnt stay focused on the story. Thumbs down on Lidia dornet .

7 chapters in, and Nope. not interested in over 6 hours of that. It's like the characters are jumping from point to point. I've heard better narration from both of the narrators.

This is the first time I’ve listened to his works and also a first for these two narrators. They rah did a superb job. I can’t wait to go to the next book. And I was very glad to see there are several series by this author. It’ll sure keep me coming back for more. Love it and I recommend it to other listeners or even readers if you don’t do audio. Gwen H from Shreveport La.

I know I'm reading a book which is fiction but this book is so far off from any form of reality it's Ridiculous. If a cop or FBI agent is undercover do they a use their own name or B make up a name. I mean seriously where are the better readers where is the editor I need this book seems like it was written by a teenager it's pretty pathetic I have to stop at chapter Ten

I love L.P. Dover. Her mystery romances are sexy, suspenseful and with plenty of twists and turns to keep even the most avid reader guessing who the culprit is. The first installment of the Armed and Dangerous Series is no different with a case of a serial killer who is murdering escort girls and leaving no leads behind. That's when the local chief of police calls in Jason Avery, one of the country's best undercover agents to help. For weeks on end, Avery goes in and out of Casinos playing the tables and getting to know the locals. He knows who the suspects are, but can't connect them to any of the crimes. At least not until FBI agent Aylee McFadden shows up to assist him. Not used to sharing his toys, Jason is hard on Aylee at first. But she gives as good as she takes, and soon the gorgeous, headstrong FBI agent and the sexy, stubborn undercover cop are doing more than investigating the case together. But it is when their cover puts Aylee in the path of destruction, that Avery realizes how far they've come... Still, to wrap up this case and capture the killer, they'll need to risk it all. Thing is if Avery is hard at playing with others, he is impossible at sharing what is his. And by the end of this mission, Aylee will learn she is definitely his. A sexy as all get out, intense as hell mystery murder romance that L.P. Dover nails like no other! #Suspenseful #greatbanter #murdermysteryromance #tagsgiving #sweepstakes

No Limit has plenty of suspense and intrigue as the women of the night are turning up dead. I love Aylee and Jason’s relationship as they work together to find the killer. I highly recommend!