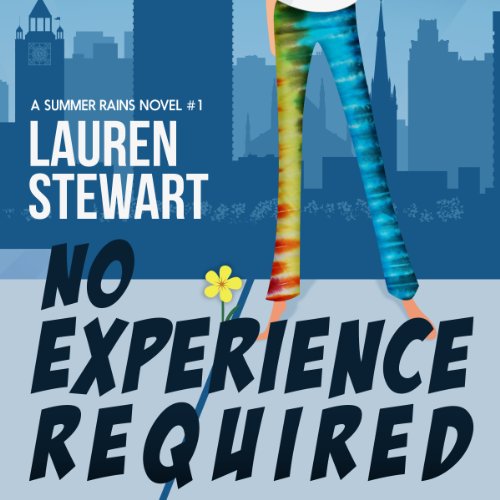 After leaving the hippie commune she grew up on, Summer Rains set a modest goal for herself: earn enough money to live a normal life in the real world.

Maybe she was aiming too high.

When she wished she could get rid of the platinum-selling pop star who was stalking her, she didn't mean 'get rid of' in the permanent sense. But someone did. And being a suspect isn't the kind of attention she wants from the gorgeous-but-entirely-too-condescending detective investigating the case. As if that wasn't bad enough, her only help comes from the man she's been in love with since her hormones kicked in...and his beautiful girlfriend.

Sounds like a good time to reassess her goals. 'Living a normal life' moves down the list, and 'figuring out who the real murderer is before she gets thrown in jail' moves all the way to the top.

But crime-fighting wasn't part of the home-schooling curriculum back on the commune. So solving the case is an on-the-job kind of thing. Along the way, she learns other skills--how to fold hospital corners, how to keep herself from becoming the next victim, and how to deal with all the insanity of the 'real world'.

What listeners say about No Experience Required

A different perspective on female lead murder mystery novels. A girl who grew up in a commune moves to the big smoke. Romance, laughs and intrigue adding with some more serious notes. Great narrator, expressive.

I really would like more of this series and have the same narrator to. Please!!!! she may the book come alive in my head better then myself.

I really enjoyed this book, the story was great and the narrator did a fantastic job with the characters. The narrator was very easy to listen to. Once I started listening to it, I didn't wan to stop until I found out what happened next. Summer Rains grew up in a hippie commune and now that she is an adult all she wants is to live a normal life in the real world. When her stalker ends up dead she ends up being a suspect. Now she is determined to find the real killer before she ends up being the next victim. If you are looking for an enjoyable read with some humor then you need to read/listen to this book.

This was a rather fun read...at times.I listened to the Audible version gifted to me for an honest review.I really enjoyed Maya Tremblays interpretation of the main character.She was also good with the other characters.I found the story rather silly with an ending that left me wondering what the outcome really was.

Would you listen to No Experience Required again? Why?

yes if I had a different copy this one seemed to have record over where at some points I could hear two recordings at the same time.

What was one of the most memorable moments of No Experience Required?

When she met up with Will again

Have you listened to any of Maya Tremblay’s other performances before? How does this one compare?

How do 3 and 4 add to 1; I'll tell you how? If any of the caricatures of human beings in this book were anything like real people I must have missed them. If any of them displayed two dimensions, much less three; I guess I missed that as well; which is too bad. There are times when in this audio when the text showed a great deal of wit, humor and talent. The plot was potentially very interesting, and the outline of the book's characters seemed to be unique and promising. Unfortunately the actual writing only delivered the aforementioned one dimension of sit-com caricatures. The author is talented and I would consider other works of hers in the future; however i can't recommend this one.

Summer Rains has grown up in a hippie commune and certainly not prepared for the real world. Everything she does seems to backfire. Even a modeling gig turns into a fiasco, when the star and his agent, stalk her. All Summer wants is for them to leave her alone. Well she gets her wish and also the police, blaming her for his death. Funny mystery, a little bit over the top with narration, but was fun to listen to.

What made the experience of listening to No Experience Required the most enjoyable?

This is a fun, easy to listen to book. I wish there were more books available by Lauren Stewart on audio books.

What does Maya Tremblay bring to the story that you wouldn’t experience if you just read the book?


*I received this work in exchange for my review; good, bad or meh. I've written all 3 kinds.

I find that reviews help me, especially new authors or performers. If you found this review helpful, would you take a moment and select "YES" below?

Feel free to follow me on Audible. I review from most genres.

Authors, publishers and narrators, please feel free to take my review to any other media that you would like. Thanks!

I loved this book, it was fun, quirky, and impossible to put down. I loved the plot and characters and can't wait to listen to the next book. I can't wait to find out what happens to summer. I can't think of one thing I didn't like about this book.
the performance was wonderful. it was easy on the ears and so enjoyable I couldn't put it down.
there was two spots in the audio book where it was double recorded and talking over itself. they only lasted for about 3-4 minutes. it didn't ruin the book for me. apparently it was in the process of being fixed.

This is a story about a girl who moves away from her hippie commune. Summer Light Rains is her given name by her huge family. Summer leaves the commune to explore the world just to see what she has missed in the last 18 years. While out and about Summer does a few modeling jobs and a video with a well known celebrity who hounds her for a date. Summer finally says yes just to get some embarrassing pictures of this celebrity who takes girls to bed and uses them. After Summer leaves his room, he is found dead the next morning.

This book is a total riot from start to finish! Summer is always getting herself into trouble. As time goes by Summer runs into another person Ghandi who also left the commune. Ghandi changed his name legally and is now known as Will. Summer has always had a crush on him. Read along as Summer who is the last known person to this this celebrity alive (it's all hush hush) takes it upon herself to discover who really killed him. This book is a barrel of laughs!

The author, Lauren Stewart did a fabulous job writing this book. I loved it! The plot is exciting and adventurous. The narrator, Maya Tremblay did a great job delivering this story to us too! With all her magical voices (even Valley girl voices & Hippie voices) along with accents keeps us highly entertained with this narration! Wonderful job ladies! A true 5 star read!

This book was very engaging. I found it hard to put down, although I couldn't really put my finger on why. It was fun to read.
The twist of having a main character that grew up on a commune is unique and kept me reading. It gave her a new perspective on the real world and I enjoyed her snarky comments. Also, she is a magnet for trouble, which keeps it interesting.
I rolled my eyes a little at the name of the cop in the book. It would have been better and more ironic if he'd had a more real world name like John Smith.