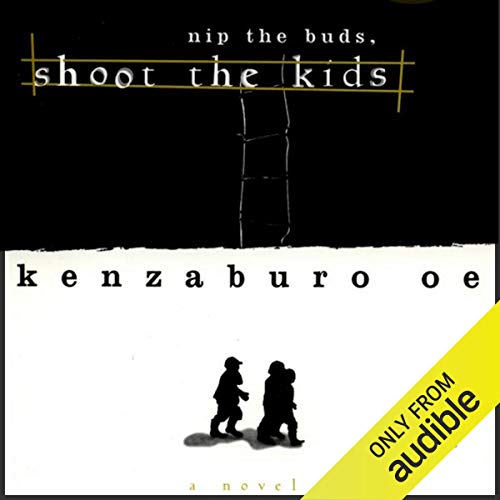 Nip the Buds, Shoot the Kids

Nip the Buds, Shoot the Kids

Nip the Buds, Shoot the Kids recounts the exploits of 15 teenage reformatory boys evacuated to a remote mountain village in wartime. The boys are treated as delinquent outcasts - feared and detested by the local peasants. When plague breaks out, their hosts abandon them and flee, blockading them inside the empty village. The boys' brief and doomed attempt to build autonomous lives of self-respect, love, and tribal valour fails in the face of death and the adult nightmare of war.

"An angry, engrossing novel...It is an extraordinary first novel, an amazing achievement for a writer of any age. Myth-like and almost painfully suspenseful, Nip the Buds, Shoot the Kids has much in common with both Lord of the Flies and The Plague.... His uncompromising honesty is what gives the story its universality and what makes its grim ending such a persuasive warning." ( New York Times)
"Oe is considered by many to be Japan's greatest postwar novelist. It's easy to see why. Here, his writing is crisp and lovely and gruesomely perfect." ( Publishers Weekly)
“Available for the first time in English, this first novel by the winner of the 1994 Nobel Prize in Literature is assured an audience both among those who are familiar with Oe's work and eagerly await the translations that will inevitably follow the awarding of the prize and those who are newly aware of Oe as a major literary figure and wish to sample the range of his work.” ( Library Journal)

What listeners say about Nip the Buds, Shoot the Kids

The most astounding book I have ever read.

Book Review: Nip the Buds, Shoot the Kids - Kenzaburo Oe Rating: 5 Stars As I am still relatively new to the outside of European literature, not just that of the Japanese variety, my experience might be subject to a sparkling fascination similar to that of a child when they see something new for the first time. However, I will argue that this book is worthy of my outrageous rating (and has subsequently toppled my previous, more western choices for my favorite Novel. If you are curious, it was The Bell Jar by Sylvia Plath, now dethroned.) Why was it dethroned? A book that I have cherished for my entire adult life and most of my teenage years? (Being only 21, this isn't much to some, but is quite and extensive percentage of my own time on this earth.) This book has it all. It is full of grit, weird sexual undertones from both hetero and homosexual persuasions (Something I have noticed is somewhat prevalent in Japanese literature, for reasons I do not yet know.) and a very human plot. You might think that is a strange way to summarize a plot as "human" but if you have ever read of the journals and tales of the Holocaust, such as Viktor Frankl, you might understand what I am getting at. The book follows 15 teenage reformatory boys in War-time Japan. Their journey leads them to a small village, where they are attempting to evacuate the now fire-bombed cities, courtesy of the American Forces in WW2. A plague breaks out and the villagers "leave the vermin" and block their path. In essence, trapping the 15 boys in the village now supposedly stricken with plague. The story follows the protagonist, the leader of the group, and the antics that teenage boys might get up to in such a condensed issue. The boys all have relatively troubled pasts ranging from assault, to homosexual prostitution. The tale is full of Urine, Shit, Sex and just about how you might expect a bunch of loose-canon boys left to their own devises in despair might be. It reminds me of the english novel Lord of the Flies, but without the intensity of the metaphor of human fighting, but rather focusing more on the despair and societal development. The boys often must bury their time in play, sex, embrace, hunting and essentially tearing down the norms of how boys should act, either sexually, societal or in any manner of conduct, effectively building a new society. (However, the boys weren't necessarily your normal pickings of the group before.) If you might find yourself interested in blurred lines, pants-wetting grime (literally) and an interesting allegory of the human condition, this is for you. Most shockingly, was how young the Author was, in the 50s, who wrote this at the age of 23, not far removed from some of the boys. Highly recommended.

very good narration. the story is very linear, which makes it very easy to follow. I was listening to it during my one hour evening commute on scooter, proud to say I haven't misheard the narrative nor misride the bike.

but lacking the pathos of a dominant central character. It is told from the first person, but we never really connect with this narrator, and thus, a lot of what happens, tragic as it is, remains distant and the reader is not as moved as he might be, were the narrator a bit more real as a person

There are many books that are this depressing and morbid, but they typically have some message about the strength of the human spirit. This is not one of them. It is merely a wonderfully written story about the degradation of a group of children abandoned to a plague- ridden, deserted village. If you are of fragile emotional health or low constitution, I would advise against this novel.

an excellent story but depressing

the child who took care of the dog

when the main character refused to sell out.

the killing of the dog

this book depressed me and made me lose faith in my fellow human beings.

Overall, this is a solid and well written book. Bleak, but solid.

The first chapter is problematic, and I'm not sure if it's a translation issue or an author issue, but words like "fagged out" feel jarring and wholly out of place. It's also hard to follow until the trip to the village. Give it a chapter or two.

Which raises my second issue with the book. There was a weird, creepy sexual undertone that was inconsistent but kept sneaking in every so often. I say weird and creepy because it didn't seem to fit in the larger context of the book. It couldn't decide what kind of tone it wanted to be. It alternated between homoerotic and homophobic with an healthy underlying dose of implied pedophilia thrown in for good measure.

Don't get me wrong all of those have an arguably valid place in literature, but they didn't fit here --at all. They did absolutely nothing to add to an otherwise solid story nor were they relevant to character development. Rather they felt like the author was either trying to personally work through something, or added in a bit of sexually socking ambiguity because -- you know-- literary fiction is more literary that way.

So 4 but with a huge star-sucking caveat.