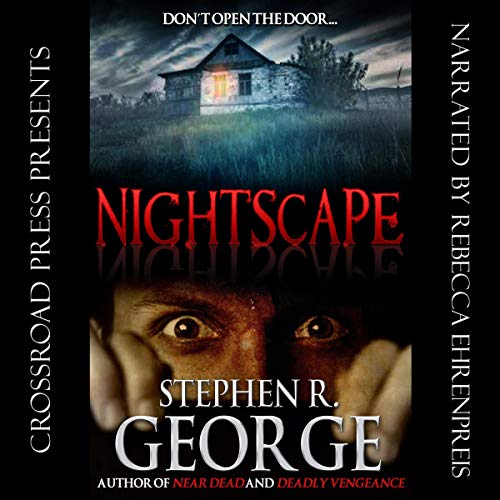 Eight-year-old Evan Laine is afraid. He'd lost a finger in a car accident, but now, it is slowly growing back. There are other changes, too. Changes he can't hide from his mom. And dreams. Dreams from which he wakes, screaming.

They are after him - the beautiful redheaded woman and the drooling boy/ man. They want him to change. They are making him change, shaping him into something just like them.

Bonnie Laine knew there was something wrong with her son. She'd seen the skin sloughing off his belly in long, wet sheets. She'd heard his screams in the night. And now, she'd seen them. The followers, hunting her son. They want Evan for something. Something too terrible to imagine.

But Bonnie will do anything to save her son. Even if it means joining forces with a murderous man who may be far more dangerous than the creatures pursuing them.

What listeners say about Nightscape

I can’t get past the narrator

I’m sorry, I can’t listen to this story. The narration is far too robotic and sounds as though she’s telling a story to a seven-year-old. I will get the book and read it.

I have to say this is more of a sci-fi thriller than horror. I took a bit to get into it but still enjoyed it. Enjoyed the characters of Evan, Bonnie and Shep even Harris towards the end, it is about boy being helped and chased by ancient healers. I was given this free review copy audiobook at my request and have voluntarily left this review. Thank you

Nightscape is a very creative, intriguing horror novel that gives thrills and chills. The storyline is definitely one of the most imaginative and descriptive that I have come across in some time. The characters are well developed some I love and some I want to use as shark chum but they actually work within the story. I loved the intrigue and twists that kept me guessing about who could be trusted. I could not stop listening and because if that I highly recommend this book. I received this book at my request and I am voluntarily leaving my honest review here voluntarily of my own volition.

This was a very good book.It seemed to be set in the 80's,maybe 90's.There is an accident and a father dissapears.The boy,now staying with his mother is afraid of his father.There is evidence of a cover up,but what of?People who aren't like regular people or are they animals.It is a bit of a weird one. Rebecca Ehrenprels was a fine narrator. I was given this free review copy audiobook at my request and have voluntarily left this review.'

Great book to read in October

Great book to read in October to get you in the mood for Halloween! I didn't quite like the ending that much, but the plot idea, the characters, the writing were fantastic! I think the creepiness/suspense factor would have been higher if this was read by multiple narrators.

The story was very compelling, and had some very good ideas in it. Overall I enjoyed this audio book and would love to see more.

I really enjoyed this story. although at first thought it feels like horror, in actuality there's a depth that takes it beyond horror into a study of parental love, obsession with revenge and final acceptance of change because of that love. I did find the narrator's speech cadence distracting at times, but it made her seem to fit her character, with all her nervousness and insecurity, to feel all the more real once i got used to it. I received a free copy of this rifle for an honest review.

I thought this was well written, intense and fast paced. I really enjoyed both the characters and the storyline!

This is a well written story that will keep you guessing till the very end.

This was awesome! Even if you think you know what’s going on you probably don’t. I love how you don’t really know what’s happening until close to the end. The characters are believable and you can relate to them
Narration by Rebecca Ehrenpreis was amazing. She did a great job.
I was given this free review copy audiobook at my request and have voluntarily left this review

I liked the book and the story although abit confusing at the start was a good plot. I struggled listening at the start as I am not particularly thrilled by the narrators voice.. Particularly the voice of the kids mum made me feel like nails scratching... But other than that the book was a lovely read.

Good story, but not a fan of the narrator's voice

I enjoyed the story but I didn't enjoy the reading. All the characters sounded like they had been inhaling helium, and slightly robotic. Make sure to try the audio sample before downloading.

what a truly amazing audiobook from the pen of Stephen R George and narrated by Rebecca Ehrenpreis, I'm looking forward to more from them xxxxxd

Enthralling, frightening, edge of your seat

This audiobook kept me interested till the end of this book. There's plenty of intense scenario. All in all it is a very good story line and narration.

Wow I loved this book, it gave me some serious chills, the whole series of events that lead to Bonnie reuniting with her son was scary, but nothing compared to the nightmare that begins to unfold as they try to deal with the strange changes happening to Evan. Nothing is as it seems, including their allies, who could be more dangerous than the unknown. I was shocked at the strange turn as the danger stalking Evan an Bonnie comes from a different source, it left me wrung out as Bonnie is faced with another impossible choice. Definately a must read.

A great story with plenty of intrigue and twists to keep you guessing. Good enough to listen to again and again.