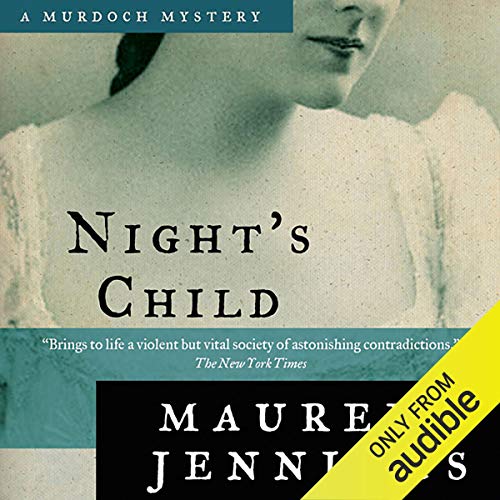 After 13-year-old Agnes Fisher faints at school, her teacher, the young and still idealistic Amy Slade, is shocked to discover in the girl’s desk two stereoscopic photographs. One is of a dead baby in its cradle, and on the back Agnes has scrawled a terrible message. Worse, the other photograph is of Agnes in a pose captioned “What Mr. Newly Wed Really Wants.” When Agnes doesn’t show up at school the next day, her teacher takes the two photographs to the police. Murdoch, furious at the sexual exploitation of such a young girl, resolves to find the photographer - and to put him behind bars.

Night’s Child is the fifth novel in Maureen Jennings’s highly praised historical mystery series. Three of Jennings’s novels have been made into TV movies under the title Murder 19C: The Murdoch Mysteries.

What listeners say about Night's Child

The Murdoch Series from 1895 Toronto.

This is the fifth book in the Murdoch series. Here, we have the chief inspector upset because someone is sending anonymous letter saying that a particular police officer is doing something bad, he doesn’t indicate what, but says he will release the information to the papers if the police don’t put an end to it. The case is assigned to Murdoch, who hates cowardly informers who try to intimate rumors and innuendos about someone without coming forward. Also, the officer accused is a friend of Murdoch’s. He investigates the case, finds the culprit, close to home, shall we say, and puts an end to the problem. But this investigation brings him into contact with a schoolteacher who is very upset because she has found pictures of a pornographic nature in her student’s desk, and then the student disappeared. He then finds the body of a murdered young man who also had been in one of the photos found in the girl’s desk. He sets out, with the help of the policeman he is rescuing from falsehood, and the teacher to track down the photographer as well as the girl who might be in danger for having seen something she shouldn’t. Again, this is a good book full of the usual characters we’ve come to love and the introduction of some new ones as well.

A gripping story, and along the way, Murdoch's love life heats up, but it's complicated...

A twister, that's for sure.

The author really gets you thinking. It is a real whodunit. The performance was excellent.

If you are considering this title because you love the TV show and the characters portrayed there; you may be very disappointed. The story is Ok but not overly clever and even the hero is less than admirable. The narrator is quite good though.

Top notch plotting with characters being added to and removed from the series. More revelations about Murdoch's past. Wish there had been more interaction with other station members. Great voice characterization, although narrator sometimes gives Murdoch's and Seymour 's name odd inflections.