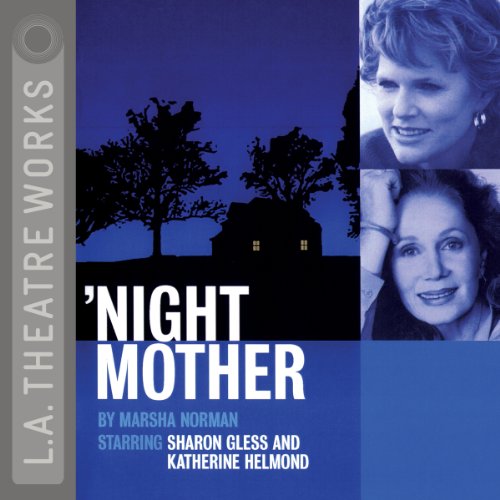 This play tells the powerful story of an epileptic woman in her early 40s systematically preparing her own death...and the frantic and touching efforts of her mother to stop her. This searing drama, which won the Pulitzer Prize on Broadway, is guaranteed to keep any listener on the edge of their seat.

What listeners say about 'Night Mother

In my youth, I had a strange list of comfort films that I would turn to both when I was happy or feeling blue. My mom never understood why I gravitated to A Trip to Bountiful, Mrs. Brown, Remains of the Day, and my special favorite ‘night, Mother. I’m sure a part of me likes “sad” things, but I think that even as a youngster, I’ve always been attracted to simplistic beauty that is both deep and meaningful. It’s hard to marry these elements, especially in literature and film, but when I come across them, I have to snatch them up!

I am currently reading a literary thriller wherein the victim was murdered in such a way as to call in to question whether it was self-administered. When perusing the victim’s bedroom, the uncanny order of the closets lead one of the detectives to question whether the victim had “arranged” things in preparation for death, as is common with many people contemplating suicide. I couldn’t help but remember ‘night, Mother, which I had no idea was a play—further yet, that it garnered the Pulitzer Prize in 1983.

A one-act play spanning a few hours, this quite simply is the story of a woman, Jessie, preparing for her death, and her candid, endearing conversation with her mother, who desperately tries to both understand and dissuade her daughter from taking her life. It is such a beautifully written play, and though it’s heavy in scope, I never felt overwhelmed. You find yourself playing the devil’s advocate for both sides, as you’re forced to see how life and its disappointments can snub the life force out of some people who are too “good” for all of the bad out there.

I think the line that just made me lose it was the following, and even reading it now, it just gets to my core!


“…I didn't know! I was here with you all the time. How could I know you were so alone?”

I’ve seen the destructive influence of unchecked depression, and this short play — in its simplicity and honesty — is so accurately painful.

If there is such a thing as “beautiful tragedy” I don’t think you’ll find anything closer than the dialogue between Jessie and her mama.

Would you consider the audio edition of 'Night Mother (Dramatized) to be better than the print version?

I don't know...I find it distracting to read plays, all the characters and direction, it's far easier to suspend disbelief when the play is being acted for you. My problem with this play is a personal one. My mother committed suicide two months ago and there was nothing in the description to warn me that there was to be a suicide, in exactly the same manner my mother used no less(a gunshot to the head) to be enacted in this play and I was therefore taken aback by the content.

Which character – as performed by Sharon Gless and Katherine Helmond – was your favorite?

There are only two characters in this play and they are both very well acted.

It made me cry. Partly for the reasons I mentioned and partly just because it was a very moving, indeed tragic ending.

Excellent, though not loud enough in places

This is a great, short play, and I love Gless and Helmond so much! They bring a very realistic, sometimes funny, and sad quality to this. I'm so glad I purchased it.

Technically, though, it is a problem when they try to simulate an actor being in another room. The sound gets really low and I have to turn it up, and then turn it down when they "come back in the room."

Very well acted by Gless and Helmann, had me in tears toward the end and at the end. Sad that someone could feel that despondent when there was nothing more serious than epilepsy, but I know that they do. But although sharing it with her mother seemed cruel, leaving her with no answers is worse. My mother's neighbor found her son hanging in the barn, and it devastated her for years because she had no reason. Just imagine if they had a day together what they could have talked out. Great play, but I read it several years ago, but hearing it in a p!at form is better!

I bet this play would have been more enjoyable if I just read the script instead of spending an hour listening to these two people scream at each other. It got so annoying I was contemplating my own suicide at the end of it.

everytime i can i revisit this sale tale

dreams in about an hour. gets you right in the feels. a daughter tells her mother she's committing suicide. a dark comedy