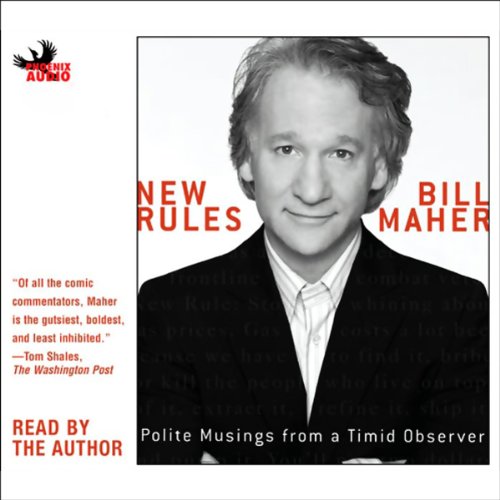 Bill Maher first came to national attention as the host of the hit Comedy Central and ABC-TV program Politically Incorrect, where he offered a combustible mixture of irreverence and acerbic humor that helped him to garner a loyal following, as well as a reputation for being a hilarious provocateur.

Now, his popular new HBO television show, Real Time with Bill Maher, has put him more front and center than ever. In particular, one of the show's segments entitled "New Rules" has struck a chord with viewers. It's within his rules that Maher takes serious aim, bringing all his incisiveness, wit, and his signature exasperation to bear on topics ranging from cell phones ("I don't need my cell phone to take pictures or access the Internet. I just need to make a phone call. From everywhere! Not just the places it likes!") to fast food ("New Rule: No more McDonald's in hospitals. I'm not kidding!") to the conservative agenda ("Stop claiming it's an agenda. It's not an agenda. It's a random collection of laws that your corporate donors paid you to pass."), Maher brings these brilliantly conceived riffs to audio for the first time, along with some singularly Maher-ian "editorials", editorials nothing like the standard fare found on the pages of the local newspaper!

What listeners say about New Rules

Funny and true but also Annoying

Most segments start off with Maher saying "New Rule" and then launching into a socio-political diatribe with a humourous edge. Some of this book is funny and imaginative but it often falls flat as over-obvious and contrived. The "New Rule" shtick got old for me but I do like Maher and his "rock the world" attitude. I think he could do better.

I am a big Bill Maher fan and I'm glad that I read this book. Yet - when someone is just doing their stand up act on paper - it that a book? While I love watching him on Real Time, he doesn't pack the same punch in this format. He's still funny and smart, but his comments somehow seem out of context without hte back drop of hte show. PS. don't his writers create "New Rules" anyway? Why doens't his writing staff get a credit here?

Cynical, mean, vicious and... hilarious! Humorless, rightwing, gun-toting, narrow-minded Bible-thumpers will not enjoy. Everyone else - buy this audiobook and laugh - it's all we have left.

... Then get the book, you're assured to like it. If you don't like Maher, then don't. None of Bill's flare is lost in this book, it's full of the crisp thoughts and pop culture references he's become known for. If you're looking to sprinkle your conversations with a few good one liners then I highly reccomend getting this.

A hilarious book for fans only

I have been a fan of Maher since Politically Incorrect, which by its very name was enough to draw me in. All his wit and sarcasm is here. Some segments had me laughing for minutes afterward, although I didn't like the format. Saying "new rule" before every segment got a little annoying, especially since some were only a sentence or two long.

As usual with our polarized society, anyone who doesn't agree with him won't take the time to listen, so mark this one for fans only. Right wing nuts will stick with Coulter, where facts are rare because they interfere with her rhetoric. Maher takes real news and puts his own spin on it, and ends up bashing everyone about equally -- except for Dubya. If you are a Dubya lover you definitely won't like this book.

I never watched Bill's TV show much but I really enjoyed this book. He is a bit more radical than me, but puts a good case for various libertarian and left wing views. Actually I am a George Bush supporter but I still thought Bill's book was good value. Classic chapters were press coverage of the olympics, safe sex in US teenagers and various jibes at all the religions. Devilishly funny!

Maher does it right

Maher says out loud what we all think in our private thoughts ... and wish we had enough guts to stand by publically.

Nothing is sacred - not the liberals, not the conservatives. All political and religous groups are hammered. No sacred cow unturned. A "fast listen" - over much too soon. I want more Bill Maher...

New Rule ? You can?t print the transcripts of you old TV shows and call them a book. But, the material was catchy, funny and I enjoyed the nostalgia of remembering what I was doing when I first heard each of his new rules. If you missed seeing Bill?s New Rules on his HBO program, get the book. If you have seen them before, you may be disappointed.

Maher is hysterical and this book is no different. I got a great laught out of it and it's educational at the same time!!

This book was funny from start to finish! It had me laughing, crying yet thinking throughout the whole time. Bill Maher Rocks!