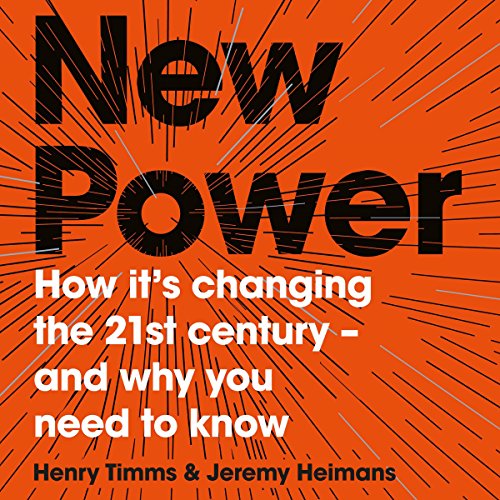 Why do some leap ahead while others fall behind in today's chaotic, hyperconnected world? In New Power, Jeremy Heimans and Henry Timms confront the biggest stories of our age - the rise of megaplatforms like Facebook and Uber; the out-of-nowhere rise of Trump and Corbyn - and reveal what's really behind them: the rise of New Power.

For most of human history, the rules of power were clear. To get ahead or get things done, you mastered 'old power', which is closed, inaccessible, and leader-driven and jealously guarded. Today, however, we have seen the rise of 'New Power' made by the many rather than the few, open, participatory, peer-driven and fed by our world of ubiquitous connectivity.

It is this New Power that has fuelled the rise of platforms like Facebook and a new species of YouTube celebrities and peer-based services like Uber and Airbnb. It propelled the unlikely success of Barack Obama's 2008 campaign and is at the heart of the increased number political protests and upstart businesses overturning traditional industries.

In telling the story of New Power, Heimans and Timms provide the techniques for using New Power to successfully spread an idea, lead a movement, or build a career in the 21st century. Drawing on examples from business, politics, popular culture, and social justice as well as old power forces like LEGO and NASA that have figured out how to blend old and new power to supercharge their work, they explain the new world we live in. They also explore the dark side of the changes we are living through: the way ISIS has co-opted new power to monstrous ends and the rise of the alt-right's 'intensity machine'.

In a world that is being shaped by New Power, this book will show you how to shape your future.

"Jeremy and Henry’s book on new power could not be coming at a better time. With hyper-connectivity enabling new forms of leadership and mobilisation, this book challenges all of us to think about the values we hold and how we can all be part of building a more open, equitable and participatory world." (Richard Branson)

What listeners say about New Power

It started off really well but then faded in the final 1/3 and got a bit repetitive.
Some good learning points.

Threshold Concepts are ideas that you just can't quite grasp. You can know about them, read stuff, learn things and even be an enthusiastic advocate or critic, but no matter how hard you try you ain't quite got it. It's like having your nose pressed up against the glass, it's all slightly blurred and muted. Then you end up immersed in some arbitrary experience and whoosh! Suddenly you are the other side of the glass. Everything becomes clear and you know that you knew this all along, it's obvious. But looking back you can't quite believe that you didn't really know it, how thick were you? Then you realise that you can't go back, no matter how hard you try, you can't unlearn what you now know. But even more frustratingly you can't seem to convey what you know to all your friends (and enemies) still behind the glass. This book won't quite make sense to those behind the glass, for everyone else, you kind of knew this all along, but this book has given you better words to explain it. Overall it's only let down only by the harping back to and use of Leadership. The authors use the word from the old power model to try and explain new power activity. The new power alternative to Leading, is called Joining In. Their misnamed leaders are actually super participants, they don't lead they participate in a way that creates the space, but not the requirement to participate. Leaving done tools lying about for others to do what they like with. So, the authors have a pain of glass to go, but this is bloody close and the best book on the subject of switching from Leadership to Participanship currently available. Look out for that word in the second edition!

A book I would recommend everyone reads

Fascinating analysis, thoroughly researched and brilliantly delivered. Essential reading for all in our rapidly changing world.

Contains a broad range of accessible and familiar case studies the understanding of which will no doubt prove hugely beneficial for all readers.