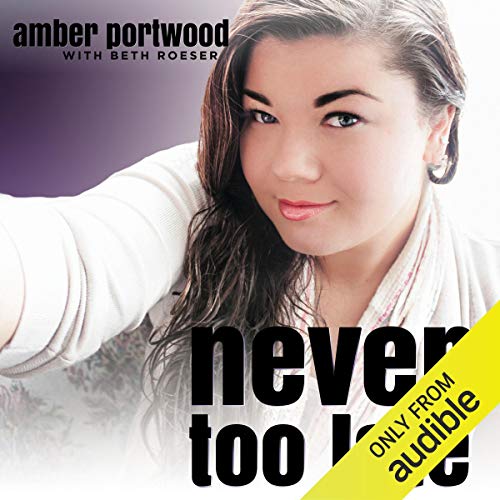 When Amber Portwood debuted on MTV's hit reality series 16 & Pregnant, no one could have predicted that the teenager from Anderson, Indiana, with the dry sense of humor would go on to become one of the most controversial young celebrities in reality TV history. But soon after Amber stepped into the public eye, her life spiraled into chaos.

From her struggles with anxiety, depression, and addiction to her brutal onscreen fights with her boyfriend, Amber seemed a troubled young woman destined to destroy herself. And that was all before she shocked everyone by sending herself to prison for 17 months!

But behind Amber Portwood's shocking behavior is a story the cameras never captured. It's a story of hardship and hope, of relationships torn apart by tragedy and addiction and put back together with strength, love, and determination. After years of losing herself in a daze of sex, drugs, and depression, Amber made the decision to stand up and do whatever it took to save her life, her family, and herself.

With her trademark honesty and dry sense of humor, Amber tells the real story of how she learned to deal with the demons that nearly destroyed her. Never Too Late sends a powerful message that no matter how far down a person might fall, it's never too late to get back up and change the future.

the message is great ! her narrating was terrible

Terrible quality on the video. Nice to hear her side but she spoke too quick and about nothing that we didn't know.

Read the book, skip the audio.

I was excited to hear her story. She had a lot to say and she went through an incredible journey and she told more of the background that we didn't see on 16 & Pregnant and on Teen Mom. I think it's better to read the book instead of listening to it. She has a hard time reading properly and it's very distracting. She runs all the sentences together and it sounds awful and rushed. It was disappointing because I had heard the other moms and they sound great. But her narration sounds really bad. I commend her for the positive outcome and improvements she's made and thankful for sharing her story. She's just not a good reader. It's distracting and sometimes hard to listen to.

This was a really good read. Although I think she could have went into more detail and had plenty more chapters it was a really decent book. I think she has had real struggles and went through a lot in her life. More power to her for writing about it.

I love Amber! I love her for being strong and sharing her story! It's exciting to hear about how she developed. The narrating is not very good though.. I had a hard time following her because of her monotone way of reading, and cutting sentences in weird places. But overall pretty good.

Not the audio version. I would only recommend reading this book yourself. The audio was almost unbearable.

The story is interesting but it could have been so much better.

Would you be willing to try another one of Amber Portwood’s performances?

No. She read too fast and it was not a good performance.There is background noise and at one point you can hear a train going by. It sounded like she recorded it with an old school cassette recorder. This book would be much better read.

Fair but could have been better

The overall for this book, is that it's good enough to read, but def could've been way better! I, myself, being a recovering addict can relate to a lot of the things she went through, except jail. But I also know there is way more detail that she could've wrote about!! Not names or places, but more detail on the story all together. The book was very short and everything she talked about most people have heard already. I thought there would have been more, way more behind the scenes or things we didn't know. Lastly- the narration was horrible!!! She read it way to fast, like as in she didn't stop when there was a period. She mispronounced words or even sentences at times. Very poorly narrated! She should have done take two, take 3 whatever it took to get it to sound right. Or even had someone else narrate it! Geez, I wanted to return this and get a different book, but I felt bad because I already returned one book. Her voice was very annoying as well!! I wasn't happy that I purchased this!

Slow down when she is reading the book. And read in a different setting. It echoes pretty bad. Probably wouldn't have bought this book if I new it was not that great.

I think everyone judges by what they see on TV no one knows her real story. She explained it well on her book. I myself am bipolar and understand how hard it could be. like she said it's never too late to change and she has. I am proud of her. She did good explaining her story.

Having been a fan of the original series and stars of MTVs 'Teen Mom' since the start, I was keen to listen to and learn more about Amber. However, I found this audiobook very disappointing. I must point out, however, that this is not Amber Portwoods fault.

Firstly, the sound quality of this audiobook is appalling! It sound like this book is being narrated from within a toilet stall. The narration is echoey and sounds like the author was too far from the microphone.

Secondly, although I am a fan of Amber Portwood, it is clear listening to this title that she is not a natural orator. She reads the book at a far too quick pace, with no regard for punctuation, stumbling over words and laughing at her own jokes. She sounds very nervous.

However, fans of the girls from Teen Mom will enjoy this audiobook and the insights it gives.

Would you be willing to try another book from Amber Portwood? Why or why not?

I would try another book as I am fan of Teen Mom.

Who might you have cast as narrator instead of Amber Portwood?

As this is Amber Portwoods own story, I feel it is important that this title is narrated by herself. However, I think that for any future titles, production qualities must be improved and Ms. Portwood should be given tips or lessons on reading aloud.