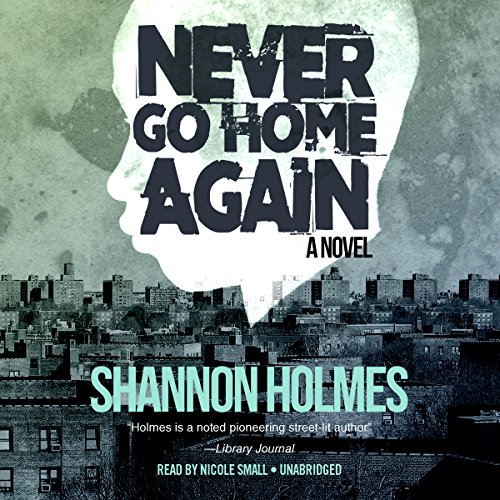 "The experience and quality that I bring to my writing can't be faked. I know what I know. Through my novels, I invite readers to journey with me into the streets. Come see what I've seen. Let me show the gritty and grimy undercarriage of society, the 'flip side' of the game." (Shannon Holmes)

Inspired by the events of his own life, the Essence best-selling author of B-More Careful and Bad Girlz presents a vivid, unflinching novel about a young man's coming of age in the city streets.

Never Go Home Again is the story of Corey Dixon, a young man whose father tries as best he can to steer him away from the lure of the streets. And yet, like so many others in his neighborhood, Corey finds the lucrative drug trade too tempting to resist. While he makes fast money for a while, ultimately Corey must pay the price for his choice of profession: his freedom. By the age of 16, Corey is sentenced to prison.

Incarcerated at Riker's Island, Corey lives through experiences that threaten to destroy his body, his mind, and his spirit. Still, in the midst of his horrific imprisonment, he discovers inner strength and - against unimaginable odds - manages to survive. Corey makes a new kind of family for himself in jail, including a teacher who encourages him to "never go home again". In the course of his journey of self-discovery, Corey comes to realize the wisdom in his mentor's words.

Unflinching and riveting, Never Go Home Again is a powerful, true-to-life story of redemption that no listener will soon forget.

Wow like I knew that was going to happened in the end. A lot of people are hard headed. Don't realized they can change once they get out revenge ain't everything. Karma can always bite the person in the a hole. When the time comes. Corey was so young so was Omar. That is crazy. Specially Corey he had a good life until he let the drug dealing take over his life. I think if he would've listen to Tate hell still be alive. And I think a lot of teenagers needs to read this book and get a better understanding what would happen if you do the things that Corey did. And Corey was right he wasn't going back to prison and that he didn't. I wish he's mom would've sent him to military maybe he would've live . idk. I thought this book was good though even though the ending didn't surprise me. I just shook my head.

This ish was stupid

From beginning to end this book was very bad. Trope after trope, cliche after cliche. Terrible writing and a terrible, unoriginal story. If it wasn't already free I would have returned it and gotten my credit back. Please Avoid.

I liked this book. I would support other reads from this author. the ending made me sad lo

I know so many Coreys

This was a great book, it showed how a young kid could slip into this cycle so easily. We need to do better by our children. 1st book by Shannon Holmes, will definitely read another...I'll follow Nicole Small to the ends of the earth! She can bring magic to anyone's words!

I expected something else, I had no idea this book was about prison. Still a good book though, I learned a few things.

Great narrator she’s outstanding. Very realistic and sad. If African American young men knew their worth and the justice system were fair life could be normal for African Americans in the United States

this is true, because of the unfairness today and the judicial system people would rather die then to go back