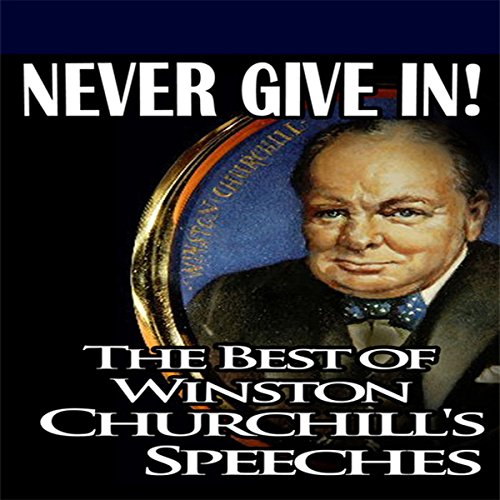 Never Give In: The Best of Winston Churchill's Speeches

Who can forget the words "We shall fight on the beaches. We shall fight on the landing grounds. We shall fight in the fields, and in the streets, we shall fight in the hills. We shall never surrender!" They were uttered in 1940 by one of the 20th century's greatest orators, Winston Churchill, eager to spur on his countrymen in their fight against Nazi Germany. Now the great man's grandson has gathered Churchill's most memorable words, spanning more than half a century, in times of war and in times of peace. Part of Churchill's gift, his grandson writes, was his ability to address his radio listeners "not as unseen masses but as individuals-he envisioned his audience as a couple and their family gathered around their coal fire in the cottage-home." Any admirer of Churchill's will want to add this audiobook to their library.

Please note: These are historical recordings. The audio quality represents the technology of the time when they were was produced.

What listeners say about Never Give In: The Best of Winston Churchill's Speeches

too many of the speeches were repeated. the sound quality on many was very poor.

Warning: this recording is badly flawed!

I saw this book originally on the Amazon site, with the Audible version linked as an "unabridged" choice along with the print edition. It turns out that this audible version does not include all of the content of the print version. It only includes a few of Churchill's pre-war speeches (with useful readings from his WWII memoirs) and most of his famous WWII speeches. Further, the second part of this recording is merely a repeat of the speeches included in the first part--i.e., not new material.


I reported this problem to Audible today and promptly and courteously received a credit to my account. I would suggest you wait until Audible corrects this problem and offers a faithful rendition of the print edition before you download it. The concept is sound, and Churchill's speeches are always stirring and instructive. It is a shame this recording was so badly flawed. I would welcome a chance to download a corrected and complete version of the print edition.

Do not buy this version of the collection. It has no Table of Contents and Does Not Contain the most famous and important speeches -- such as "Finest Hour" or "Blood, Toil, Tears and Sweat" -- very frustrating. If those speeches are hidden in here I can't find them. Try something else. Shame on Amazon for selling this. (Luckily I was able to download for free.)

I've have been a contented audible listener for 3 or 4 years now. Some titles not so good, some fantastic.

But this one does NOT download!!! Yet all signs (from Audible's side, say it has).

Oh yeah, you can't review unless you give it at least one star - this should be negative stars!

I welcome this unique pesonal account of early 20th century politics from such an icon.

Wonderful prose
Chastening to realise how far we have fallen from the heights conjured up by these speeches.