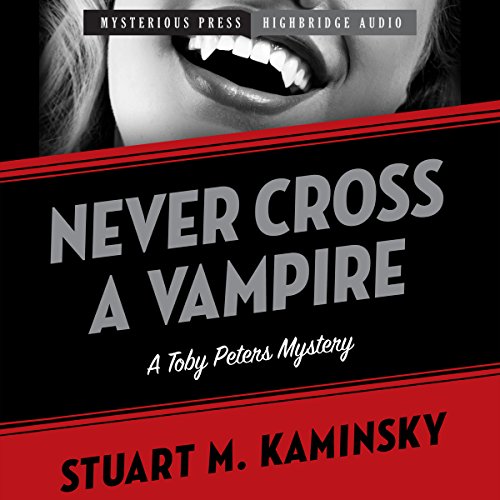 Coffins fill the basement of a crumbling Los Angeles movie theater. Five vampires crowd around fading horror idol Bela Lugosi, peppering him with questions. A malfunctioning plastic fang causes one of the undead-wannabes to lisp. The effect is less than fearsome, but Lugosi is terrified, for one of these oddballs has been making threats on his life. He hires Toby Peters to provide security against his unbalanced fans. The detective is not concerned, but he should be. Even fake vampires can kill.

Meanwhile, the Warner brothers contact Peters regarding a murder. A body has surfaced in one of Hollywood’s darker corners, and police suspicion has fallen on one of the studio’s star screenwriters: William Faulkner. As he struggles to balance the murder investigation while protecting Lugosi, Peters finds a thread connecting the two cases. To get Faulkner off the hook, he’ll have to find out who wants to kill Hollywood’s original Dracula.

What listeners say about Never Cross a Vampire