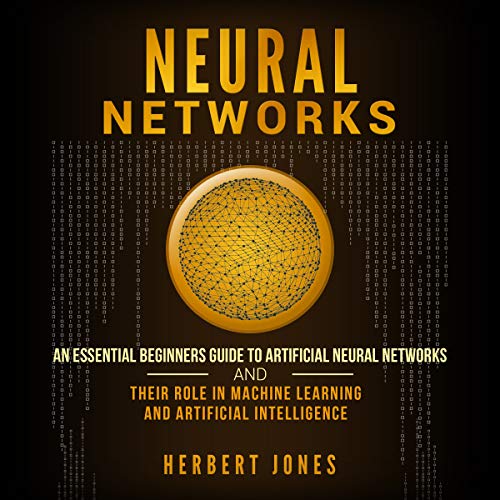 If you want to learn about Neural Networks then keep reading....

Aladdin from The Arabian Nights had a magic lamp that fulfilled his every wish when rubbed. Today we have a smartphone that serves as a window to a whole universe of knowledge, entertainment, and even wise personal assistants, such as Siri - all we have to do is rub the screen. Aladdin’s lamp was powered by a genie, but what powers Siri?

Neural networks. It’s an astounding concept that tries to mimic the way living brains work by amalgamating human and machine ways of thinking.

The audiobook itself isn’t meant to be strictly academic, but a blend of colloquial and technical that brings this exciting, yet eerie, topic to the widest swath of the general public. There is a lot of coding and math behind neural networks, but the listener is presumed to have no prior knowledge or interest in either, so the concepts are broken down and elaborated on as such.

Each chapter is made as standalone as possible to allow the listener to skip back and forth without getting lost, with the glossary at the very end serving as a handy summary.

So if you want to learn about Neural Networks without having to go through heavy textbooks, listen to this audiobook now!

Not relating to ANN/AI anywhere in the book. Although advertised for beginners it's not worth reading at any level. some chapters loosely mention ANN in a chapter subject and then for the next 10 minutes won't mention ANN/AI. The author just rambles and then presents a doomsday closing on how ANN/AI could bring down the world if misused. He confuses his Hollywood examples with reality.

This book is a collection of brief generalisations, to the point of inaccuracy, with a dash of some technophobia.
after listening to over 2/3 of the book, I can tell that one thing missing from this book is neural networks.
Sure, the term is thrown all over the text, and without defining what it actually means, the author uses it to indicate almost any algorithm that is more than trivial, and falls in love with the metaphor of Neural Network==brain to venture into the realms of magic and fantasy. it contains shallow stories on how NN were used.
It does not help in getting an initial grasp of what NN are, what is possible (and what isn't) to do with them, and skips through a random flurry of topics, none of them is covered in any useful way.

This is fine for those who have no knowledge of AI or Neural NW but doesn’t go to any depth about how it works, only covers the threat of what it could do

If you are looking to understand what actually happens when you are doing a web search, or just what neural networks are in general, this is a great book to guide you through it on an easy to understand level.

According to my expectations

I am not ashamed to say that I am a beginner to neural networks, but I am learning more daily. Reading Neural Networks by Michael Taylor helped walk me through a lot of information I didn’t even know I didn’t know, without making me feel stupid in the process.

This audiobook provided me with a fast-paced, accessible, and fairly in-depth overview of neural networks. I would recommend this audiobook to anybody interested in this fascinating subject.

oh what a wonderful world we have unleashed... in our own image and beauty... need more words to reach 15 says the algorithm... la vida fue bella

Three hours of a guy trying to scare you about AI.

I was interested in listening to this book because I wanted to learn more about neural networks before I begin learning Python to experiment a little bit with them. This book was nothing but 3 1/2 hours of a guy trying to scare people about AI. I Was pretty disappointed.

This book is designed as a visual introduction to neural networks. It is for BEGINNERS and those who have minimal knowledge of the topic.

This podcast really just delivers the low hanging fruit and lacks any real depth. The authors sound like they are scaremongering and are bordering racist at times, which adds little to the narrative they appear to be going for. The lack of clear structure makes me question if this audiobook itself was produced by a Neural Network.


This topic is math intensive. Derivatives, gradients, matrices and stuff. The author is aware this and explain each concept with just enough details to understand what is going on. More in depth explanations of mathematical concepts are available in the appendix . The book has a lot links to tools, tutorials and further readings.

This book caught me from beginning to end. It simplifies so much information that otherwise would be difficult to digest, the fact that it is so visual makes that you quickly understand the information that the author provides. I would like to read more books by this author.

Got What I Really Wanted

The book is a good introduction. It has a good example of building a CNN. In this example, the author uses images of snakes and lizards. He describes building the file structure needed to do this.

If you are in the market for a beginning text on neural networks, this may be the book for you. It is well written, thoroughly researched, and presented in an easy to understand format.

A bit tough book to read like I said unless you are into it but definitely helped broaden my knowledge in the subject matter and I found the explanations and descriptions interesting and helpful.

The knowledge is vast and the author is extremely knowledgeable in this arena of study. I think that this book could greatly benefit those individuals who have a passion or a developed understanding of this niche beforehand.

The information it provides as well as the resources included are an awesome place to begin. I was only looking for a bit of light reading to get a general idea, but this will take me a lot farther when I am ready to dive into the actual mechanics. Pretty cool tool.

This was a thoroughly comprehensive book! I was expecting to pick it up and just get the gist of neural networks, but this book has so much more information than that.