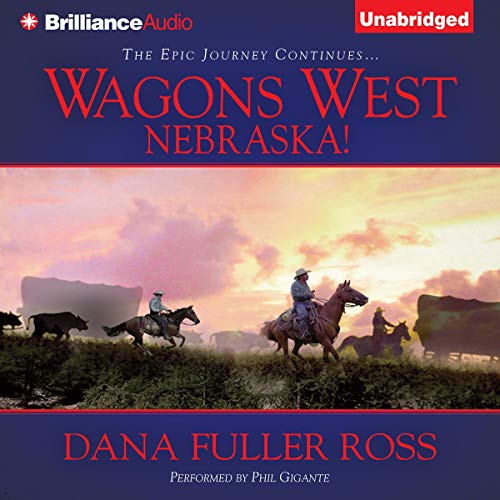 Autumn, 1837. Driving onward - against the worst of man and nature - a legendary caravan of men, women and children forge a new link in the wilderness trek from Independence, Missouri to the "Promised Land" beyond the Rockies. They are pioneering Americans from North and South - side-by-side with immigrants, a black man and an Indian - waging a fierce daily battle for bare survival on an uncompromising journey to their private destinies and the fulfillment of America's greatest dream.

Nebraska! This is the story of fearless devotion to a hard-won ideal, of betrayal from within and sabotage that reaches as far as Britain's and Imperial Russia's shores, of the story of "Whip" Holt, the ruggedly quiet leader of this leg of the perilous migration; and of Cathy Van Ayl, who leaves her family behind in Missouri to continue on with Whip Holt's train - and perhaps, to win his heart.

What listeners say about Nebraska!

The stories are pretty good but the narration is what hits this series out of the park for me.

I found this book interesting... a bit predictable, but a nice 'listen'.

I have loved the first 2 books, I can't wait to start the third. The characters have a lot of depth, the story is very interesting, and the narrator is fantastic.

but the mall with my dad when I was younger love them best loved being able to listen to it because I'm a mom and a Church secretary and I have the attention span of a hummingbird now.

Love this series, makes history come alive. ready for the next book in the series!

And the trek continues

loved it, moving on to book 3
however it is strange how the bad guys are able to negotiate with the Indians without being tortured or killed on sight.

If you could sum up Nebraska! in three words, what would they be?

I listen mostly at night as at times I have a sleep problem. I like this Dana Ross series as they are just plain interesting & fun to learn about how people did things back in the pre Civil War days. No super markets, shot your own meat, gather water (not in plastic) & so on. The story line is very interesting with plenty of gun fights. A wholesome listen.

How the women in the wagon train began to blossom & harden up to the circumstances, including learning to shoot.

Phil has a way of modulating his voice to fit many situations. He is very good. I don't keep audio books

Folks with an interest in early America & the settling of the west will enjoy this series. Plus, the price is right!

The story is great and the narrator does a wonderful job bringing the characters to life. I hope they'll continue to record the rest of the books in the series.

If you like stories about the pioneers traveling West, these are pretty good books to read. I really could do without the history talk, but other than those (and they are few), it is a good read. I'm looking forward to book Number Three!

Where does Nebraska! rank among all the audiobooks you’ve listened to so far?

I tried out the first book in this series after reading someone's review, while looking for something a bit different to listen to. Now I'm just addicted to this series because it's perfect escapism!

From the continuing events that the characters have to deal with, I'll do a bit of research to check the background to that. So I'm learning much about American history and the early settlers' way of life. I've also felt the need to look at maps showing the many Indian tribes that are included in this story, and so have a much better context and understanding that is completely new to me, fascinating!

Oh he is a joy! I have no idea who he is but Iove his narrator's voice anyway and some of his accents, and one or two of his characterisations make me laugh out loud.

I'm looking forward to making my way through the series. If books one and two are anything to go by, I won't be disappointed by the rest.