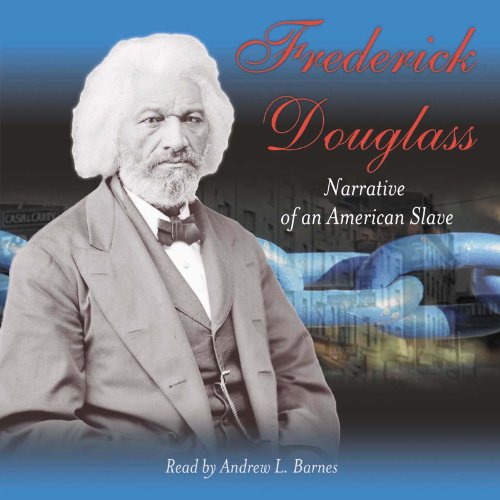 Narrative of the Life of Frederick Douglass, An American Slave

Frederick Douglass, prominent abolitionist, civil rights activist, and reform journalist, was raised in the malicious system of slavery. Frederick was brought to the nearby wheat plantation of Colonel Edward Lloyd. Two years later he was moved to Baltimore to labor in the household of Hugh and Sophia Auld, where he remained for the next seven years.

Eventually, Frederick secretly learned to read and write, despite the laws against slave literacy, studied discarded newspapers, and became knowledgeable about the national debate over slavery. After an unsuccessful attempt to buy his freedom, Frederick escaped from slavery in September 1838.

Soon after arriving in New Bedford, Frederick Douglass' remarks at an August 1841 convention of the Massachusetts Anti-Slavery Society on Nantucket Island brought him to the attention of Garrison, a leading white abolitionist. As he matured as an antislavery lecturer, his keen mind even led some to question whether he had ever been a slave.

To counter doubts about his life experience as a slave, Douglass wrote an autobiography providing full details of his life, in the winter of 1844-1845. Narrative of the Life of Frederick Douglas, an American Slave, is an emotional journey into the atrocious system of slavery, and the inspirational triumph against insurmountable odds.

What listeners say about Narrative of the Life of Frederick Douglass, An American Slave

Prepare For a Full Range of Emotions

What did you love best about Narrative of the Life of Frederick Douglass, An American Slave?

Frederick Douglass takes you through his life. You experience his thoughts, his feelings, his ache, his need, his trials, his dejection, his fear, and his jubilant success. You cheer when he stands his ground, you sorrow when he sorrows. This book moves the reader.

What was one of the most memorable moments of Narrative of the Life of Frederick Douglass, An American Slave?

The most memorable moment for me was in a scene where Douglass stands up to one of the master's refusing to be whipped. The courage that took must have been exceptional.

As could be predicted my favorite scene is Douglass's success in escaping to freedom and sending for his fiancé. Shortly there after they were married in a traditional Christian ceremony, which was not allowed for African American's in the South.

The whole book is moving. If there is one moment that is most striking it is when Douglass is rebuking the cruelty of the Southern view and interpretation of Christianity.

The director of this audiobook was asleep or absent. The performer says "emanciated" for "emaciated," and "injure us" for "injurious." The word "minute" in the sense of "very small" is pronounced – or at least, should be pronounced – differently from the word "minute" as a unit of time. Those are just a few examples of the many shortfalls in the performance of this classic text – shortfalls that distracted me as a listener.

Wow! What a powerful book and performance.
His articulate wording moves the heart - Frederick Douglass was one of the wisest men of his time. I would believe him to be a true kindred spirit

A Must Read for Everyone

This book is for you then. This read reminded me of Mark Twain's style. Douglass is one of my heroes. He is simply a brilliant man that went through hell. No one should leave high school without reading this.

A most honest narrative. A greatly read story that keeps your attention at every turn. Lots of detail of what slavery was like generally as well as for Mr Douglass himself. What a horrible time to be alive for black people in America. Please make sure hear him out no matter who you are.

An autobiography that changed history

Narration was excellent. Vivid description of slavery in the USA and one man's success in overcoming bondage. Subsequently changing the course of the abolition movement. I would highly recommend this book and narration.