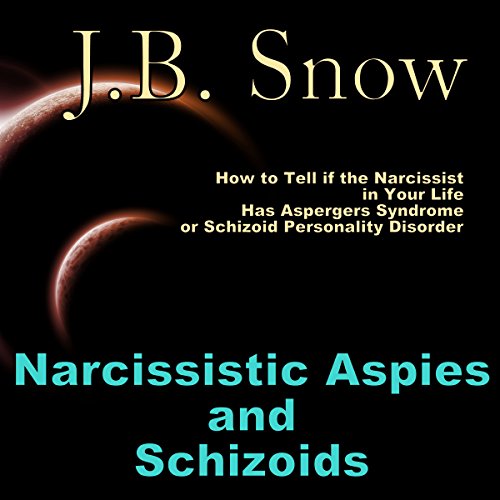 By: J. B. Snow
Narrated by: Alicia Giangrisostomi

In many of my books, we discuss the different tools that are in use by a narcissist who is being a nuisance to those around him. He uses threats, coercion, gas-lighting, manipulation, lying, cheating, triangulation and cognitive dissonance to prey on his victims. He forms trauma bonds with those who he is the closest to so that he always has an unlimited narcissistic supply from other people. He has to constantly feed his needs and his ego from external sources, because he is empty inside his soul from being a victim of another narcissistic injurer.

This book seeks to point out the traits that might be seen in a narcissistic and self-absorbed individual who may have Schizoid Personality Disorder or Asperger's Syndrome. These individuals might resort to adapting OCPD (negative perfectionism) traits or narcissistic traits in order to overcome some of the disabilities of their underlying problem.

What listeners say about Narcissistic Aspies and Schizoids

superficial & of no value informationally

not very informative it's like one long description and not very detailed at that. Completely neglects to answer the question the title presents ... conflicts with established behaviors and definitions ... narcissists never want alone time .. if it doesn't hold true when seen alongside Aspergers or schizoid PD's then it is not narcissism it's something else or merely how it presents is narcissistic like but it's not narcism