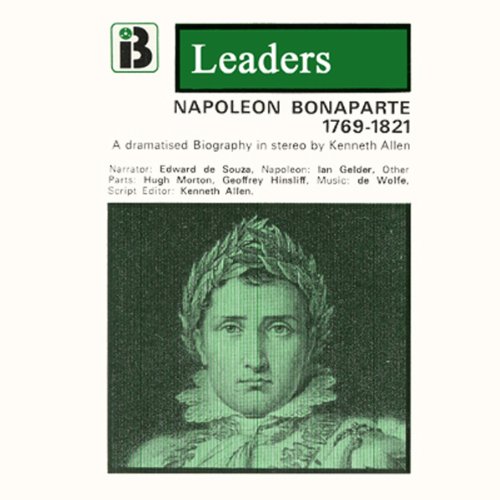 Napoleon Bonaparte is a thrilling, dramatic retelling of the often violent life (1769 - 1821) of the French Emperor, relentless conqueror, and undersized man who "almost realized his dream of a uniting Europe under one Emperor; himself".

The unfolding bloody clashes, including the penultimate Battle of Waterloo, and the sophisticated games of cunning military strategy are described with compelling curiosity by Britain’s Edward De Souza, with Ian Gelder performing the title role with brash moxie, and Geoffrey Hinsliff and Hugh Morton supplying strong additional characters.

France was in a state of chaos. Her Royal Family and most of her nobility had been swept away during her bloody revolution and terror stalked the land. The country was bankrupt, her armies a rabble of ill-fed, half-naked men. And then, within a few brief years, these same armies were sweeping across Europe in an all-conquering flood. As if by a miracle, a man had arisen who restored France to her former greatness, and more. In so doing he made himself the idol of France and the bogey-man of every other European nation. This audio biography traces the fascinating career of an incredible man, his rise to unparalleled heights, his triumphs, the disaster of the Russian campaign, and his final defeat at the hands of Wellington at the Battle of Waterloo, a defeat that was to end in his degradation and a lonely death on the remote island of St Helena.

The part of Napoleon is played by Ian Gelder. Other parts are played by Geoffrey Hinsliff and Hugh Morton.

What listeners say about Napoleon Bonaparte