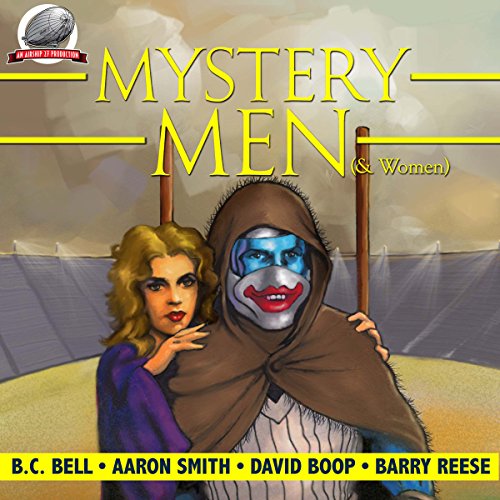 During the golden days of American pulps, hundreds of masked avengers were created to battle evildoers around the globe. The Black Bat, Moon Man, Domino Lady, and the Purple Scar, to name only a few of these amazing pulp heroes. Now Airship 27 Productions introduces to pulp listeners brand new pulp heroes cast in the mold of their 1930s counterparts. Get ready for high octane thrills and adventure with:

A former street thug, Frank "Mac" MaCullough now fights the very gang bosses he grew up admiring in defense of the poor and helpless in his Chicago neighborhood.

The Bagman is featured in his own novel-length collection: Tales of the Bagman

When her beloved cop husband is gunned down and the police refuse to investigate, Irish immigrant Maria Smith dons red widow's garb and dishes out her own brand of justice.

Crippled by the mob for not throwing a game, star football player Gordon "Gory" Burrell is tragically transformed into a bizarre metal man. Accepting his fate, he vows to destroy those who prey on the weak.

Haunted by a brutal past, Sue Timlin dons a mask and becomes judge, jury and executioner to those villains the law cannot touch, all the while maintaining a unique secret that gives her the upper hand in her war on crime.

If you could sum up Mystery Men (& Women) Volume 1 in three words, what would they be?

I loved all the different tales of this homage to the pulp heroes of the 1930's. The stories I liked most being 'The Bagman', 'Gridiron', and 'The Red Veil'.

Which character – as performed by Jiraiya Addams – was your favorite?

Jiraiya did a wonderful job on the narration of the different stories and made each character come to life. He even did a fine job of narrating the essays at the end of each story and made them entertaining.

I did laugh at some of the more comical moments from the 'Gridiron' story. I will also say that I was never bored listening to the novel and enjoyed practically all of it.

All and all this was an enjoyable collection of stories written in the pulp style of the 1930's. Some of the written language in the stories did seem a little over the top at times with the descriptions of people or actions. But considering that these stories were written in the 1930's pulp style it doesn't seem out of place and fits with the themes of the book. The only thing I did not like in the book was that in the story of 'Gridiron' there was a Chinese character that was written in a stereotypical way that was a little offensive to me. I know what the writer was going for when he wrote it, but I think it could have been done in a different way. Granted, in the 1930's that is how oriental characters were written, but I wish the author would have broken from stereotype and done it differently.