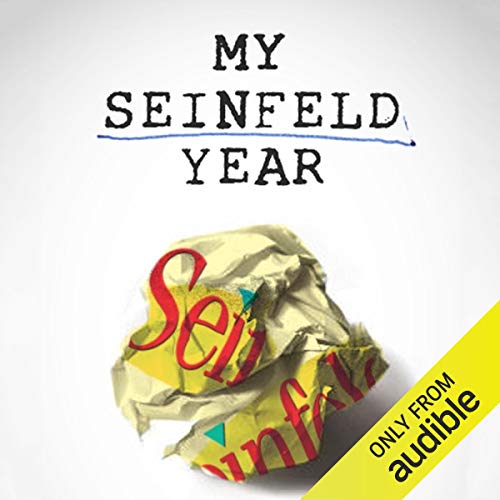 You'd know Fred Stoller if you saw him. He has appeared on practically every great sitcom you've ever seen - Everybody Loves Raymond, Friends, and Murphy Brown just to name a few. But he has never been a regular on a series, always the guest star. He longs to find a showbiz home. Instead, he is a television foster child, shuttling from show to show in the vain hope that one will finally agree to keep him. My Seinfeld Year tells the hysterical and bittersweet story of what happened when Stoller finally got a shot at the showbiz stability he'd always dreamed of - as a staff writer on one of the biggest television shows in history.

What a fantastic quick story!

I really enjoyed this because there didn't seem to be any padding or fat on it. Stoller gets straight to the point and his time at Seinfeld is the majority of the book. The stories that inspired some of his writing were wonderful and it was great to hear some of the inner workings of the comedy powerhouse.

I listened to this as an audiobook. I always enjoy audiobooks more when they're read by the author, and this was no exception. Stopping short of calling Stoller's read a 'performance', his tone and voice added comedy where there was none, and extra in the funny parts.

Closer to a long podcast than a book in my mind, this is a perfect 'reset' button on your reading/listening program. There aren't really any nuggets of wisdom to make you feel better or superior to others, but it's a really great time with Stoller who you begin to feel for as a friend.

Short but not sweet, just enjoyable

I'm familiar with the actor and his typecast character as the whiny schmuck, so I was okay and enjoyed listening to the author read his material. When a comedian writes a book or in this case a short thingy, said comedian should narrate it. However this rule does not work for any other writer.
I also remember Fred's stand up act, and could recollect it when he mentioned it in this short reading.
So please listen to the sample before buying if you have never encountered or can recall the comedic actor/writer Fred Stoller. If you don't know him from Adam or Adam's 3rd cousin, you might want to pass.
I enjoyed this book. I liked Seinfeld when it was on, and found the behind the scenes descriptions interesting. I laughed out loud a few times.

What made the experience of listening to My Seinfeld Year the most enjoyable?

We really loved Fred's tale of his year at Seinfeld in his own voice!

What does Fred Stoller bring to the story that you wouldn’t experience if you just read the book?

I think Fred's delivery is an integral part of his story!

Yes, in fact, I listened to it twice. After I listened the first time, I played it again for the whole family on a trip!

I was really happy that Fred didn't use profanity, so I was comfortable with playing the book for the whole family.

I love the inside scoop on Seinfeld and Sitcoms in general. Love the detail including pay rate which I've always wondered. That was shocking! My only complaint is that it is short, right under two hours. I would love to hear more.

This was an enjoyable book - short, just long enough. It was interesting to hear about the whole writing process for a sitcom like Seinfeld.

I have to drive quite a bit for work and this story is of the perfect length for a day trip. The story is entertaining and the narration is on-point. It really makes me appreciate what it must be like for a sitcom writer. I've already listened to it twice and it's a given that I'll listen to it again during one of those few-hour trips.

This was a quick witty straightforward listen. Fred is hilarious - there are some cringey moments.. Oh... Don't do that Fred!! But he does and shows us his humanity. I love behind the scenes stories and this one is a topper!

If you could sum up My Seinfeld Year in three words, what would they be?

What was one of the most memorable moments of My Seinfeld Year?

The way Fred developed stories from his own life.

Which character – as performed by Fred Stoller – was your favorite?

It was touching how understanding and compassionate Fred was toward others who were unkind to him along the way. It's as if he gave everyone tremendous latitude and understanding. He seemed immensely appreciative of every small "win" in his life.

I'm so glad he narrated the book! It just wouldn't have been the same otherwise.

If Fred Stoller would have had at least one interesting thing to say or story to tell or was the slightest bit funny this could have maybe, maybe made it to 2 stars.

If it have been read, written and about anyone else.

What character would you cut from My Seinfeld Year?

Please don't buy this. I know it's only $1.95 but believe me, you'll hate yourself. Take the two bucks and set it on fire, those few seconds of excitement watching your money burn will be 1000x more enjoyable than listening to this book.

I saw the title and thought "Oh, Fred Stoller...I know him. He spent a year writing on Seinfeld!!? I bet hearing him recount that year will be pretty funny and it's only 2 bucks!" Well was I wrong. Fred is a long time "comic" and actor, he's most famous for playing Gerard on Everybody Loves Raymond.

Fred is a colossal bore. This book is awful, hearing him read it in his nebbish voice is beyond annoying. I always thought the voice he used was a bit, part of the act, but it's not! It's really how he talks and it intolerable. The thing that makes it so intolerable is that he's not telling us anything about writing on Seinfeld but it's his life story and his life couldn't be less interesting.

It's mostly him finding different ways to bitch about not becoming a famous actor and how he's still a struggling actor in his 50's and how even from a young age his life was boring and unfunny.

But don't take my word for it on how boring and lame Fred Stoller's life story is, just look at the run time, 1 hour 45 minutes. Now if you're thinking to yourself "boy, I don't know if it would take me 1:45 to tell my life story, that seems like a long time." You may be right, but you're not a "comedian"/actor who's had a 30+ year career in showbusiness. Here are a few examples to prove my point.

I think you get my point. Please don't buy this book.

I had to Google the authors name but as soon as I saw his photo I recognised him instantly and really enjoyed this short book.

It offered a fascinating insight into the world of acting, writing and TV.

As a fan of the show Seinfeld, I especially enjoyed hearing about the writing process and behind the scenes detail.

It comes across as a very genuine piece and very funny. Hope to listen to more by Fred.

An entertaining listen. Worth a callback.. would like to have heard more (or see a show inspired by his experiences and then listen to the book about the making of that!)