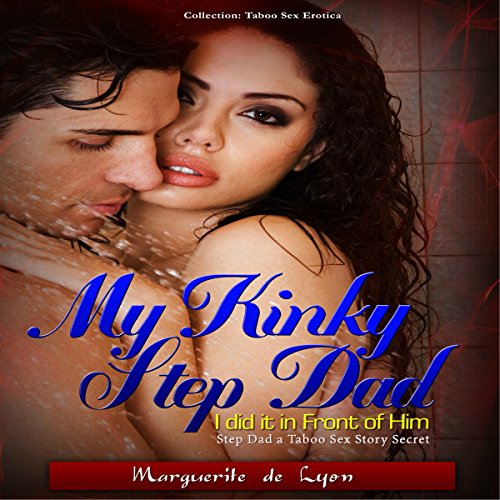 In this kinky three-part story, you'll witness the sexual adventures of Anna, a young girl with high tits, a pert ass, and a monstrous sexual appetite. And lucky for her, she's got more than enough men in her life to fulfil those urges. When her stepdad remarried, she inherited a giant ass family and a couple of sexy cousins to boot. But now she's got a problem: A sexy stepdad who just won't screw her...no matter what she does! It started off with them sending nasty pictures to each other and has now escalated to videos. And with Father's Day coming up she wants to shoot the ultimate sex video for daddy dearest...and has enlisted the help of her cousin Zane. She's going to end this once and for all by forcing him to watch her getting done in every position. But that's not the end of it...because now stepdad retaliates by going balls deep into half of her friends. Things get even wilder when Anna decides to top this insult in the only way she knows how. By throwing a wicked gang bang for stepdad's birthday party. And the best part? She'll be slurping and bending over for his best friends. But when he once again tops her sex stunts she knows she needs help. And so she goes to the one women who can get stepdad's dick hard. Stepmom. And - after a steamy makeout session - they hatch a plan to break his will once and for all. It all comes together in the final scene of this sexy adventure which will blow your mind, so get in now.

What listeners say about My Kinky Step Dad

What did you love best about My Kinky Step Dad?

What was one of the most memorable moments of My Kinky Step Dad?

Honestly I cannot pinned down just one. I will say all of them.

Yes, I actually listen to it in 1 sitting. At the end it left me wanting more.

This will make a good movie.

I absolutely loved this perverse story

if recommended, it is very good. my mind went to the clouds is really exciting

Anna, it looks like an old girlfriend is very sensual, love and brings back fond memories of the past

totally exceeded my expectations greatly, you will not be disappointed

What did you love best about My Kinky Step Dad?

That this author managed to combine just the right amount of sultry and sweet!

What was one of the most memorable moments of My Kinky Step Dad?

Every moment was memorable! I won't be forgetting this read anytime soon. :)

Have you listened to any of Sierra Kline’s other performances before? How does this one compare?

I haven't listened to any of her books before, but she is definitely my new favorite.

This read completely made me swoon!

What made the experience of listening to My Kinky Step Dad the most enjoyable?

The main Character reminded me of a female version of myself. She's seductive and a sex addict.

My favorite character was Anna. I loved how Anna was creative and her sexual side was amazing. She's really warped and at the same time down to earth.

Sierra Kline's performance was excellent. Her voice is very seductive and appealing. Herr voice was truly amazing, made me feel like Zane.

Yes I could not have helped myself. From beginning to end I was lost in the seduction.

What made the experience of listening to My Kinky Step Dad the most enjoyable?

I would led have to say Zain. Listen to the audio, his description and what he does to "help" the main character in her quest for retribution.

Not ly did I listen to it in one sitting, this will be my third time listening to it. It's absolutely amazing. It was hot, sexy, perverted, lustful, and had a great story behind it.

Boy, I don't even know where to start. After having listened to this audiobook, not once, not twice, but three times since I've purchased it, I think it's time to admit, it's pretty damn good. Assuming you are an erotica fan, such as myself, I'd say, this one is top notch. I still feel my cheeks burning, from all the sensual descriptive chapters. I will say this, what I'm more drawn to, aside from the kinky sex scenes are the story lines behind them, and this one has a pretty decent one. Even after reaching the end of the book, I wanted more and I'm pretty sure there is more or will be more. I have to know what the step dad does after the last chapters, it killing me to find out.
To the author I say Bravo, to potential buyers. I say ... You won't regret It

The audiobook is great that's why!This was great and a lot more enjoyable.

The main character of this audiobook

This story brings it all to the table, it is funny, hot, steamy, and thrilling.

Where does My Kinky Step Dad rank among all the audiobooks you’ve listened to so far?

What other book might you compare My Kinky Step Dad to and why?

no, it is just superb, hot and sizzling

Which character – as performed by Sierra Kline – was your favorite?

this audibook has become the best.

Yes, to enjoy the audio sex

Voice of the Narrator, hot and addictive

Yes, I finished it in one sitting

I enjoyed this collection a lot. The narration is good the stories are short but well written. Wide mix of sex stories

Where does My Kinky Step Dad rank among all the audiobooks you’ve listened to so far?

A lot hotter then most of the others! I really enjoyed it!

What other book might you compare My Kinky Step Dad to and why?

Naughty Mom - Returning to the Fountain of Youth

Oh gosh, once you start you won't want to stop. HOT!!!

If you could sum up My Kinky Step Dad in three words, what would they be?

Well the story builds up quickly and it gets pretty steamy and exciting fast.

Have you listened to any of Sierra Kline’s other performances before? How does this one compare?

Well narrated at the right pace and tone.

Great book and I will recommend it to any other adults.