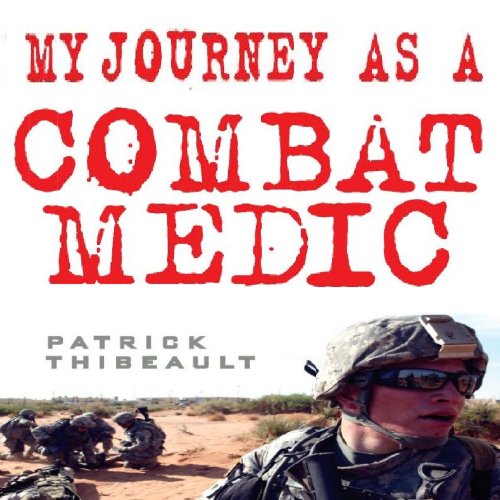 My Journey as a Combat Medic: From Desert Storm to Operation Enduring Freedom

My Journey as a Combat Medic is a no-holds-barred look at the modern medic in the US Army, allowing us a glimpse at the training as a soldier and as a specialist, as well as deployment and front-line duties and the impact of service on civilian life, including an honest look at PTSD, from the author's own personal experience. Rather than a technical manual, My Journey as a Combat Medic is a detailed firsthand account, concluding with a letter to new medics, providing a career's worth of advice and knowledge as they begin their journeys.

What listeners say about My Journey as a Combat Medic: From Desert Storm to Operation Enduring Freedom

The only reason I've given this an overall 2 is because I respect the hell that anyone in combat has ever gone through. My dad was obsessed with World War 2, my mom with the Holocaust, and I grew up on Vietnam. I've always wanted to know more, know it all.
This is just a rambling account of most of Thibeault's history with training in this place, training at that place, with but a few snippets thrown in where you KNOW he saw and experienced hell, but he instantly goes onto something else, something… pointless.
He has an excellent chapter on PTSD, but that's all… Really.
And in his final letter to aspiring medics, he tells them to pack things for yeast infections and UTIs because, even if there's little chance of women being in combat, ya wanna be prepared… Really.
And once he says he treated muscle pains and aches with "a medicine called 'ibuprofen,'" 'cause nobody would know that otherwise… Really.
The worst part is that it's all delivered by a narrator whose voice sounds suspiciously like Kermit the Frog's and who delivers all lines, even the rare hard-hitting one, as though he's speaking to a class of second-graders. (Imagine: "So we got a rag to stop the blood that was spurting from the sheared off leg, boys and girls." A line that makes you gasp and think, "Oh, my God! What…?" but then rambles off into something about carrying his gear at Camp Here of There.)
I read the kindle version because I thought that maybe the narrator was just so bad he was throwing the whole story off, but no. It really is a jumbled, meandering mess.
I feel guilty because honestly, the chapter on his PTSD gives you a taste of what it's like: the wonder of just sitting outside to look at the sky, at all hours of the day or night, something that can freak the neighbors out. Of the surging rage that can't be quelled, just smothered slightly by medication. Of his inability to connect with other vets who can't relate or who push their own views on him. Of his wish to flat-out deck people who ask him, "So, like, did you kill anyone?"
I feel for him.
But I can't listen to this again. It really needed an editor and guidance.
And I hope he finds the peace he deserves.

Patrick Thibeault's "My Journey as a Combat Medic" is a nice personal memoir. I appreciate his honesty and his interesting anecdotes from his military experience. Having a spouse with PTSD, it was particularly interesting to me to hear Patrick describe his own PTSD symptoms and experiences. Do realize that the book is written by a man without a lot of writing experience. As a result, the sentence structure is simple and often repetitive, and the book lacks a strongly organized narrative. That being said, I found his words sincere and unaffected, which kept me listening throughout. The narrator, Joe Bronzi, does a decent and serviceable job with the book, though he does nothing to enhance the listening experience. He seems to me to be a "nonfiction" narrator, but I wouldn't trust him with a single work of fiction.

Really quite badly performed in my opinion and the army songs between each chapter was possibly the worst decision they could have made. It destroyed pacing was badly done and if they had played the sound of a baby crying it would have been less annoying.