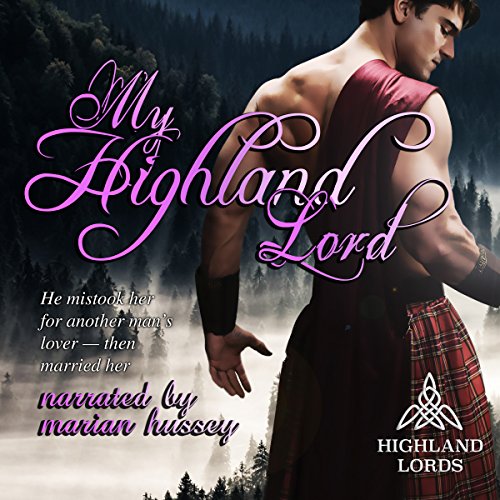 "London heiress kidnapped by the Marquess of Ashlund", read the headlines. Yet no one tried to save her. Phoebe Wallington was seven years old when a mass assassination attempt rocked Regency England. Her father was the only accused traitor to elude capture. Seventeen years later, the one man who could prove her father's innocence is dead. Now as a grown woman and a British spy, she's no closer to learning what really happened that day. Phoebe's quest for the truth takes a sudden turn when she's kidnapped by a suspected traitor. But Kiernan MacGregor, the Marquess of Ashlund, may not live long enough to stand trial. Someone wants him dead, and Phoebe stands in the killer's way. The only way to save her reputation and protect Kiernan is to marry him.

What listeners say about My Highland Lord

Loved this . I meet Kieran in Book 1 but he was there briefly . Loved how he was like Marcus his Dad . It was a beautiful written and narrator red story . About love at first site ... Treachery , and a scheming men in government . Marcus kidnapped Pheby thinking she is someone else . There was someone else trying to kidnapp her also . And even a deeper blot someone was after her dad . Supposedly her dad was in the plot to assinate the Lords in Congress . Loved it Kieran was the Marquess of Ashland . And Marcus is now a Duke
So or to see the MacGregors go

Would you consider the audio edition of My Highland Lord to be better than the print version?

Phoebe Wallington (London Heiress) and Kiernan MacGregor (the Marquess of Ashlund) story come to light in this tale. Being mistaken as someone else, Phoebe is kidnapped and held to long to be released without her reputation being stained. So now to save her from being ruined she must marry. But Phoebe being head strong, stubborn, and a self thinker refuses to yield. Let Phoebe take you on the ride of your life as she flees her captives, search for traitors and fall in love. Spanking is involved. How else do you handle a spoiled child?

When she realized she loved him

I really enjoyed this story, A lot more than the previous book, My Highland Love. I really enjoyed Phoebe, she was smart, strong, witty, beautiful and said what was on her mind. And her being a spy was great!. Kiernan was great too. Loved him, he was sexy, strong, smart and just a great hero. The chemistry between these two was great. It felt real and genuine. There was a couple very nicely written hot and steamy sex scenes, not erotica.

The story line and plot were great. Loved the spy and the assassination attempts. This was a long book but didn't really seem like it, It wasn't full of filler nonsense and the story flowed very well. There was lots of great dialogue throughout the entire book.

This was a very enjoyable read/listen.

As for the narration.LOVED IT! I am a huge fan of Marian Hussey. Her narrations are just fantastic, all the men sound like men and if it's the hero he sounds sexy. She gives everyone their own distinct voice, the men and women. She has a great reading voice and reads with emotion and inflections as called for. She does the accents very well too.
I highly recommend Marian Hussey she makes a story even better.

Loved this one. It was filled with

Loved this one. You will find a stubborn woman and a committed man. Excellent read and the Narriator can suck you right the characters

A good story loved everything about the book. Romance and a thriller- could have stayed up all night listening

There was no scene setting excitement, mystery, or intrigue - just jump right into the middle of a boring dialogue that made you feel like it was a tired story that you stumbled into without hearing the beginning that led me to care about the boring scenes.

What could Tarah Scott have done to make this a more enjoyable book for you?

There needs to be some excitement, mystery or anticipation. This story had none

Was My Highland Lord worth the listening time?

no. waste of a credit