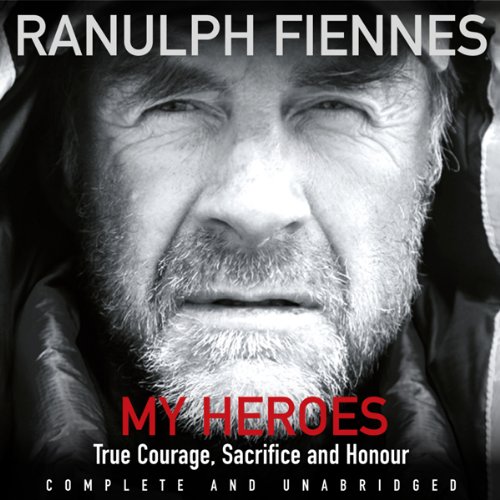 In My Heroes, the 'world's greatest living explorer' (Gunniess Book of Records), writes about the people who have inspired him - from explorers to policemen, families to freedom fighters. Wherever in the world Ranulph gives one of his lectures or motivational speeches, someone always asks: 'Who inspired you to do all the crazy things you've done?' For the first time he explores this idea by revealing his own personal heroes and what lessons their actions may have taught him in his own often hazardous profession. This book describes the extraordinary and often horrific events that led to these ordinary individuals becoming Ranulph's great heroes. From polar survivor to knifed-and-beaten policeman, from a woman missionary to a special forces soldier, these wonderful people will make you proud to be part of the human race.

What listeners say about My Heroes: Extraordinary Courage, Exceptional People

I was very excited, when I saw this book among the new releases. Without thinking much, i downloaded it. I was excited to hear inspiring stories of human endeavor, courage, adventure.

After listening to the story for a while, my excitement turned into disappointment, deep disappointment unfortunately. The first big story was from a war. About "good" guys killIng "bad" guys, and the courage (!) behind it. About why it is no-brainer and most-logical, most ethical to also kill the civilian goat herders, when these poor people, by accident, bump into the "good" guys, who were sneaking into a village to carry an assasination of a "bad" guy... And when they don't do that, how big of a heart(!) they have...

I could not continue much further. I was disgusted by the stories presented as acts of heroes, but in fact, in my opinion, nothing more than most primitive and uncivilized, animal like behaviour.

If you think the world is black and white, if you think it is the moral imperative of the "good" guys to kill "bad" guys, and if you want to listen some raw war stories ("... his bullet hit the enemy's face and push his nose into his brain..." or something similar, dont remember the exact phrasing) go ahead, get this book.

But if not, i am afraid you need to look somewhere else.

This book was disappointing, it's poorly structured and difficult to get through.Fiennes sets out his definition of 'hero' and 'courage' in the first chapter and seems at pains to stress the book won't be a list of military heros and VC winners, which I understood and it left me intrigued by what was to come. I was to be disappointed. Especially when the very first hero was indeed a military one.It drifts from quite specific examples of individual courage into an endless catalog of genocidal horror with a bizarre obsession with the gory details.In the context of what I had expected, given the title and opening chapter, the time was not well spent. Had I wanted a book that covers in detail some of histories worst genocides, I would have bought one.

Who might you have cast as narrator instead of Andrew Wincott?

Andrew Wincott was a poor choice for this book. I didn't like the style of his narration, he adds drama to his voice depending on what is being read, and at times puts on accents, which is extremely irritating. The story or subject alone is all I want, I don't need drama being added by the narrator. It may be suited to children's books, but was completely inappropriate for the content matter of this book.

I think I get what Ranulph had in mind - the portrayal of human courage in the face of unimaginable horror and hardship, but what wasn't delivered was the story. There was no attempt to try and explain or understand what makes some people act in the way that they do, and I couldn't help but feel too much emphasis was placed on describing the environment and situation, and not enough on the story, in some cases there was just no story, just a poor and very graphic history lesson.There really is no need to give example after example (it really does go on and on) of horrific violence.

I would recommend this for anyone with a strong stomach and for those feeling very upbeat and happy. For anyone feeling slightly delicate in body or soul, this is best avoided

Would you be willing to try another book from Ranulph Fiennes? Why or why not?

I would try another book by Fiennes as he is a good writer of adventures.

What does Andrew Wincott bring to the story that you wouldn’t experience if you had only read the book?

Andrew Wincott has a very steady strong voice which is needed when dealing with some of the more gruesome descriptions of torture.

Was My Heroes: Extraordinary Courage, Exceptional People worth the listening time?

This is a book that you need to take breaks from, digest and get strength back to deal with the next horrific chapter. It gives a very clear and good description of many historical events and i feel i have learnt a lot from it but it isn`t exactly 'easy listening'

An enjoyable read but a few of the stories also appears in R . F book FEAR. Boys own stuff packed with good underpinning knowledge.

Personally I found this book a bit tough to listen to as it goes in to gory details about what the perpetrators did to people. I had to break the book down as listening chapter after chapter was a bit too much. That being said out with the gory parts incredible stories and people I hold in complete awe.

Really inspiring stories of people and unsurvivable obstacles. Through genocide to extreme environments this was at times difficult to listen to the pain an suffering some endured but thoroughly good listen!

No. There are some well worn stories in this book (spoiler - see 'The Killing Fields, 'Hotel Rwanda, 'Lone Survivor' and more of the same). I like Mr Fiennes' books in general but this seemed to be too much of a retread of stories already told. I listened to one chapter at a time but after listening to the first few chapters I found that I wasn't really looking forward to listening to the next ones - I knew that it would be more of the same, tales of murder, torture, and generally harrowing stories.

Would you recommend My Heroes: Extraordinary Courage, Exceptional People to your friends? Why or why not?

What aspect of Andrew Wincott’s performance might you have changed?

Nothing to say about Wincott but this book has the worst person I have ever heard trying to do accents.

Did My Heroes: Extraordinary Courage, Exceptional People inspire you to do anything?

Man against Man. Man against the elements. True heroes one & all. Worth the time.

This app is rubbish. Bored now

I had great expectations when I bought this. There are most certainly some very interesting people however, at times I felt that he was just filling pages. I think Fiennes should stick to what is is much better at...polar exploration. Although I have to acknowledge that his polar exploration day have a finite lifespan if he is to carry on writing in this way may I suggest ..."less is more".