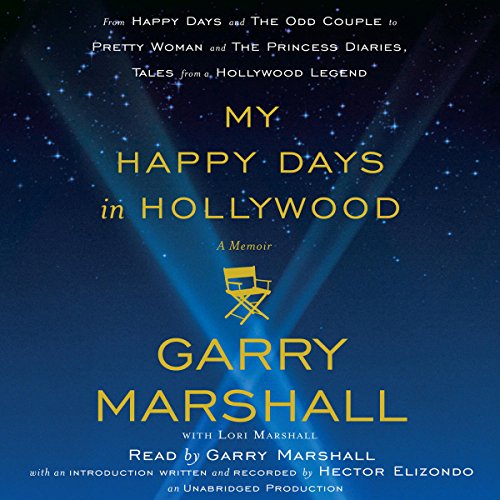 My Happy Days in Hollywood

My Happy Days in Hollywood

Once called a legend in his own time slot, Garry Marshall has been among the most successful writers, directors, and producers in America for more than five decades. As a comedy writer who began his career during television’s last “golden age” writing for Dick Van Dyke, he went on to produce some of the most beloved sitcoms in television history, including The Odd Couple, Happy Days, Laverne & Shirley, and Mork & Mindy.

Marshall’s enormous influence as a director has been felt in film as well, in such classic motion pictures as The Flamingo Kid, Beaches, Pretty Woman, and The Princess Diaries. His work on the big screen has delighted audiences for the last three decades and has withstood the test of time.

In My Happy Days in Hollywood, Marshall takes us on a journey from his stickball-playing days in the Bronx to his time at the helm of some of the most popular television series and movies of all time, sharing the joys and challenges of working with the Fonz and the young Julia Roberts, the “street performer” Robin Williams, and the young Anne Hathaway, among many others.

This honest, vibrant, and often hilarious memoir reveals a man whose career has been defined by his drive to make people laugh and whose personal philosophy - despite his tremendous achievements - has always been that life is more important than show business.

"Garry Marshall is walking entertainment. He is smart, insightful, funny… and so is his book.” (Henry Winkler)
"Even though he speaks slowly with a distinctive New Yorkese Bronx accent, he has managed to quickly create, write, and produce a raft of beloved television series that speak 'American'. I am happy that he gifted us with a witty memoir.” (Carl Reiner)
“Thanks to my brother I have a life. I’m sorry I almost ruined his during Laverne & Shirley.” (Penny Marshall)

This is my first written review after nearly 30 books on Audible. This book was so good, I want others to know!
I grew up on Happy Days and Laverne and Shirley, hearing it from Garry's perspective was great. His story, coming from him, was a bonus!

I love Garry Marshall and hearing him tell his story first hand was awesome. There's something about that Brooklyn accent that gets me every time I hear him speak. I grew up watching his TV shows and watched his movies into my adulthood, but I still learned a lot of new things about him. His wife Barbara is pretty awesome, too. As much as he deserves to, I hope he never retires! Definitely worth the listen.

What a life, what a story. I highly recommend it to anybody, especially those of us who grew up with Mr. Marshall's shows and movies. They all live on for future generations to enjoy and for us to remember back to those innocent days. Thank you Mr. Marshall, God bless you and may you rest in peace.

I'm going to be honest. I'm a film nut, and watched plenty of 1970's and 1980's tv series and I had no clue who Garry Marshall was. Now I know! And I've very glad to have read (listened) to this book.

It's a very interesting read. How a "kid from the bronx" came to create "Happy Days" "Mork and Mindy" and quite a few other extremely successful tv series... and then go on to direct and produce a lot of really bad Hollywood movies too :)

Along the way we learn something about what it is like to be a director or producer on tv shows and movies, and get many little stories about a lot of the big name stars and filmmakers as well. And it's really a treat to hear Garry himself (with his thick NY accent) read the story.

It's a long but a very gratifying book.

It was fun to read the behind the scenes details of his various TV shows and movies - very interesting! However, I wanted more! More details, more stories, more factoids... I felt like it was just a pleasant anecdote or two per production.

On the other hand, he is so prolific that if he would have delved deeper into detail, the book would have been thousands of pages long!

I like Garry Marshall’s style and sense of humour, this was a really fun read.

A must have read, absolutely fabulous!

I thoroughly enjoyed this book; Garry was talking about all my favourite shows and it was just so fascinating to hear the producer's/writer's perspective and to get an idea of what goes on behind the scenes. I highly recommend this book. As a PS: Thoroughly enjoyed listening to Garry's Bronx accent, I loved it.

It sounded like the recording was uneven. I found myself adjusting the volume a lot. I have never had to do that before with an Audiobook. I loved having Garry Marshall tell his story as the narrator however if you aren't used to listening to a very thick NY accent, you may have a hard time with it.

He has had a fascinating life. He knows everyone, and is one of the biggest players in Hollywood, however is very, very down to earth. There aren't any Hollywood shockers or scandals disclosed, but a real life, honest glimpse into a powerhouse's life. It is a good listen.

Garry is a national treasure...

Garry is a delight. He's a sweet guy with entertaining stories. Nothing deep or next level, but an over all enjoyable book.

He also is a fantastic narrator.

Excellent bio from the man who created Happy Days!

This is a great biography! Well written and read by Garry Marshall. What a life and a great story full of a lot of inspiration and good advice. Highly recommend. RIP Garry Marshall.

I enjoyed listening and hearing the story of his life. He has accomplished so much through his life.

the author had some great anecdotes to tell,& lots of name-dropping .
however it was a great listen.