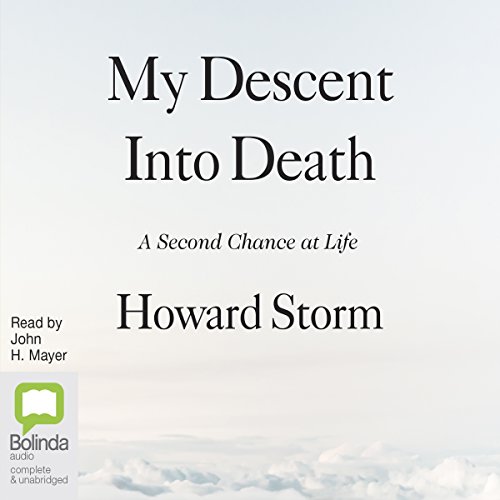 My Descent into Death

My Descent into Death

Not since Betty Eadie's Embraced by the Light has a personal account of a near-death experience been so utterly different from most others - or nearly as compelling.

In the 30 years since Raymond Moody's Life After Life appeared, a familiar pattern of NDEs has emerged: suddenly floating over one's own body, usually in a hospital setting, then a sudden hurtling through a tunnel of light toward a presence of love. Not so in Howard Storm's case.

Storm, an avowed atheist, was awaiting emergency surgery when he realised that he was at death's door. Storm found himself out of his own body, looking down on the hospital room scene below. Next, rather than going 'toward the light', he found himself being torturously dragged to excruciating realms of darkness and death, where he was physically assaulted by monstrous beings of evil. His description of his pure terror and torture is unnerving in its utter originality and convincing detail.

Finally, drawn away from death and transported to the realm of heaven, Storm met angelic beings as well as the God of Creation. In this fascinating account, Storm tells of his 'life review', his conversation with God, and even answers to age-old questions such as why the Holocaust was allowed to take place. Storm was sent back to his body with a new knowledge of the purpose of life here on earth. This story is his message of hope.

What listeners say about My Descent into Death

The fear of God

I've heard/read a lot of NDE type stories, I find the topic fascinating but they seem to contradict each other with their evidence. One stated that Jesus came to him and said he didn't die on the cross, and that he wasn't resurrected but that he fell into a coma, eventually healing, then going on to basically live a life in hiding, and that he hates the way he's been portrayed. Instead Howard praises Jesus and all he represents here on earth, and basically puts the fear of God into anyone who doesn't 'believe' in the source stating it's unforgivable (how ungodly), with a little bit of shame for the 'sinners' thrown in for good measure. Disappointed in his version, I suppose you just have to decide for yourself in the end. Personally I'll go with the people that have said that it's not about sin or judgement, but about how loving, kind, forgiving and compassionate we are to ourselves and others, that's what connects us all. And that you won't be condemned, frowned upon for not believing, heaven exists whether you believe or not!

I thought this would be a personal story, however most of the book is an attempt explaining life and death, in the manner of one who knows. If you're inclined towards being a believer it might be perfect, but for someone not looking for an explanation of facts, it is disappointing.