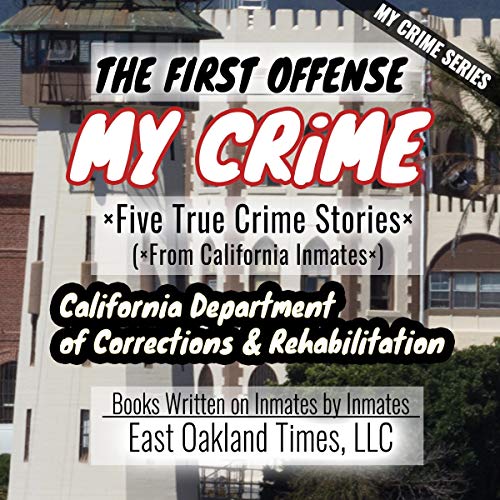 My Crime Series - The First Offense

From a cell in San Quentin, the San Francisco Bay area’s internationally known California state prison, comes to you the true biography of an incarcerated felon, Jay Jay.

Raised in the Silicon Valley during an era when farms outnumbered industry, Jay Jay found trouble young, very young. Serving time at age 12 is not the beginning of Jay Jay’s descent into criminality.

Take a crash course on the drug game with Jay Jay and you will find yourself hearing scenarios you never imagined possible.

Audiobook two: "Holler at Your Girl"

Cjay is a transgender woman of color housed in San Quentin. Cjay has been in nearly as many prisons as she has fingers, yet nothing in her upbringing predestined her for crime.

Addiction does that to people, turns good to bad. Cjay loved and hated drugs. Drugs allowed her mind to rest, but her mind could not rest without drugs.

Her mind, in fact, was spinning with pain, guilt, and rejection. Being transgender, especially in the 1980s and 1990s, was the life of a pariah. Fortunately for Cjay, she had her fellow trans-sisters.

"Hood to Heels" is the unbelievable true story of Lawrence, a child raised in American ghetto circumstances who became the epitome of extreme violence while at the same time holding tight an inner secret of female identity.

Prepare yourself to look behind the curtain. You will find out how crimes such as carjacking and crack dealing are perpetrated. You will stay up late with Lawrence as his mind swirls in the consideration of who he is. You will witness the racial divisions found in Los Angeles neighborhoods pitting Hispanic gangs against Black American gangs. Finally, you will visit the prison psychologist with Lawrence, and with Lawrence transitioned to Lauren, you will confront former gang associates as they challenge her identity.

Money is the aim, and young women are the product. Bullets fly, tears drop, and children watch. "Mouthpiece" communicates the pride and prejudices of a warrior pimp seizing plunder, camaraderie, and a demigod sense of self through violence, street credentials, and psychological manipulation.

Brian Shipp is a risk-taker. He skis black-diamond slopes, throttles fast-moving motorcycles, and cherishes the thrill of an occasional misdeed. He is a young man with a twinkle in his eye and a propensity for getting caught. Through hard work and charm, Brian races his way to the top only, time after time, to find himself crashing down due to ill-conceived schemes.

What listeners say about My Crime Series - The First Offense

Very riveting & am impressed with the stories. Like hearing from different people & stories