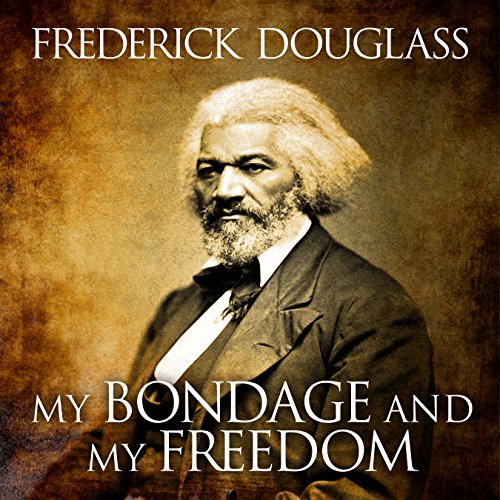 My Bondage and My Freedom

This is ex-slave Frederick Douglass' second autobiography. It was written after 10 years of reflection following his legal emancipation in 1846, and his break with his mentor, William Lloyd Garrison, catapulted Douglass into the international spotlight as the foremost spokesman for American blacks, both freed and slave.

Written during his celebrated career as a newspaper editor and speaker, My Bondage and My Freedom reveals the author of the Narrative of the Life of Frederick Douglass, written in 1845, has grown more mature, forceful, analytical, and complex, with a deepened commitment to the fight for equal rights and liberties.

What listeners say about My Bondage and My Freedom

I find it hard to have conversations on issues regarding slavery and current issues in American when a vast majority of people have no real historical reference point. This book will be a great start to defining and understanding the true North as we all move through this racial wildernesses in America.

I really didn't care for the performance, as much as the content resonated.

It was slow, monotone, and the reader seemed unfamiliar with the content based on mispronouncing mr. severe as mr. Sever-y, which might not be as big a deal if it weren't explicitly talked about in his first autobiography.

While I fully enjoyed the history, it's clear that Mr. Douglass was a far more intelligent man than I am. I'd have to say that the times when I had to pay extra attention to follow were due to my personal lack of literary acuity.
I did have trouble some times picturing him because he usually lacks to mention his age in many circumstances.
I also did not like the voice of the reader. It wasn't until I was 75% through the book that his voice, delivered with lack of emotion and with constant monotone, grew own me.
All that said, it was a very well crafted novel, with history and truth of the utmost importance. Mr. Douglass is a true hero.

I found the narrator compelling and think that had Douglas himself read his book to us it would have been in the same measured tone. The appalling story needs no emotional addition to be effective.

Douglas still today represents the best voice for the African American population in America for intellectual equality, his genius rivals any and all academic scholars in his defense of the humanity of his people!

eloquent reading of an american masterpiece

a piece of biographical non-fiction that often reads with the epicness of a fictitious film.

A realistic view of slavery and freedom.

Fredrick Douglas layed out for the reader a clear and critical discussion of slavery and race relations in his United States. The read kept my interest throughout the story. The introduction was also compelling.

This is the fascinating, heartbreaking, yet inspiring true account of Frederick Douglass, from young slave boy, to escape, to world-renowned spokesman for freedom and equality never-before witnessed, in his own words. It gripped me from the first sentence, and at the last sentence left me with only, "Wow! ... Wow!"

An ingenious intellectual and emotional tour de force.
Stirring and dread-inducing and heartwarming and uplifting and Ennobling.
It is astonishing to note that Frederick Douglass invented new literary techniques in this book.
What an uncommonly gifted writer.
It really was one of the great joys of my life to read.

a must-read to anybody that wants to know the history of America. it is a ugly story of slavery and a triumphant American story of freedom.