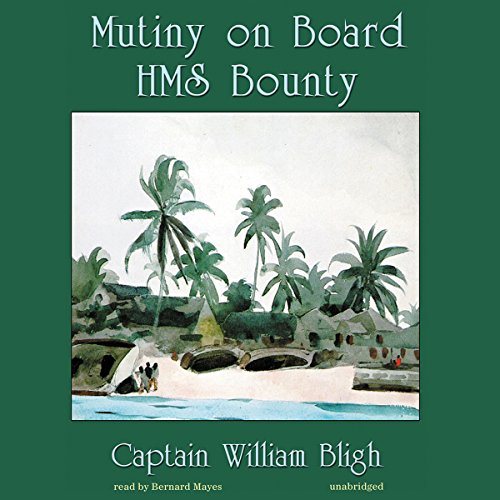 Mutiny on Board H.M.S. Bounty

In 1787, William Bligh, commander of the Bounty, sailed under Captain Cook on a voyage to Tahiti to collect plants of the breadfruit tree, with a view to acclimatizing the species to the West Indies. During their six-month stay on the island, his men became completely demoralized, and on the return voyage mutinied. Yet a resentful crew, coupled with ravaging storms and ruthless savages, proved to be merely stages leading up to the anxiety-charged ordeal to come. Bligh, along with 18 men, was cast adrift in an open boat only 23 feet long, with a small stock of provisions, and without a chart.

His narrative, deeply personal yet objective, documents the voyage and Bligh’s relationships to his men, and thereby exposes the oft debated question of what manner of man he really was.

What listeners say about Mutiny on Board H.M.S. Bounty

Ever since I was a teenager I’ve loved the Illustrated Classic - Mutiny on the Bounty so when I saw this I thought I’d finally read the actual full book, however I am utterly disappointed to find that it barely resembles the story I knew.
However helpful this recourse might have been for explorers in the 18th century, it is pretty much just the captain’s log and as such, incredibly boring to a ‘normal’ person these days. The actual ‘story’ could’ve been told in less than an hour, the rest is literally a seemingly never-ending description of the weather, coordinates and the rations they ate. A few times in the latter half you can even hear the narrator struggle!
And quite often it suddenly repeats 10-15 seconds of story, yet obviously from a different recording?!? Very poor production..
Don’t waste your time on it.

I read this book years ago and it has remained in my mind all these years hence. It was and is, while being a cadence of a log, is a fascinating as a maritime novel. I can only wonder at how Bligh brought himself and his cast-off crew to their first survivable destination made such an epic voyage in an open boat. It is a true story from his perspective and is a high adventure of any in the days of sail. It is a stand-alone account of superior seamanship, crewmanship and steadfast determination. It fires my mind when compared with much lesser tales of fiction; and with actual survival at sea stories. A remarkable work!

If you seek to relive a great adventure this is a great source. I highly recommend this narrative to the sea-faring adventurer!

Captain Bligh is a naval genius. Although portrayed as a villain in movies, his own account seems the mutiny seems balanced and highly professional. The first part is a bit dull, but the mutiny and open-boat journey is one of the greatest feats in naval history... almost 20 men packed in a jolly boat, over 3,000 miles through hostile tribal islands. Bligh's brilliant navigation and iron discipline saved his men.

Another Look At Bligh

As a young lad I thought Captain William Bligh was a criminal, but as I have grown some whiskers, including 6 years in the USN, its pretty obvious Christian and his mates were the criminals under laws of the sea. Bligh was a bit paranoid, but he surely does not get due credit for his navigational brilliance. A good book for a high schooler and those that cannot get the salt water out of his veins.

I was very surprised by how engrossing and moving is this amazing story. Although I had known of this incredible 3600 mile voyage in an open boat I had never imagined or conceived of what an astounding feat of seamanship and leadership it really was. Bligh has certainly been misrepresented in other narratives and it took having these events put into the proper perspective for me to appreciate his courage skill and humanity. His narrative is very well written, very involving, very engrossing and I am surprised that I had never heard of this work before. Very highly recommended.

Great "other side" of the story

Very well done in terms of a reading. I have read most everything on The Mutiny On the Bounty. Oddly, until now, I had not read lieutenant William Bligh's own account. This was quite good. Interesting how only a few minutes were even spent on Fletcher Christian. From Bligh's respective, Fletcher was not a major element in the entire voyage, on their than the actual mutiny of course. Other writings and movies of course paint this big picture of a relationship between the 2 and ultimate animosity. Bligh would disagree. This is certainly the most accurate representation of what actually happened, from the departure in England until Bligh and company's landing in Timore.

Four stars for narration since occasionally sentences will be repeated and waver in volume, but otherwise the narrator is the perfect fit for the portrait of Captain Bligh and delivers the book wonderfully.

This book reads as an official report, and not a story for casual consumption. The only downside of this, for my mind, is the constant listing of latitude and longitude coordinates that do nothing to further the listener's comprehension of the events. The consequent benefit of the format, is that care is taken to describe many things that may otherwise be glossed over as the Captain wanted to ensure full understanding by the reader. This means that a large amount of the book is spent learning about the natives of the islands and how the British interacted and traded with them making the book far more valuable than just a story of a ship's crew.

It was also disappointing that the vast majority of dates listed do not mention the months, making it impossible to keep an accurate timeline without external research (one of the few if not only times that the author appears to have presumed knowledge by the reader).

Minor complaints aside it is a wonderful primary source to learn about the mutiny on the ship, as well as the general atmosphere of adventure and trade in this era, and is delivered excellently by Mr. Mayes.

editing errors in the narration but otherwise good

some of the first or last portions of a chapter are repeated by the narrator which must have been an editing mistake. the book itself is something everyone should read. very informative and fun

Very little detail of the actual mutiny. Now, if it had been titled "Bligh's Travels" I might give it a higher rating.

An enjoyable listen but let down by the editing

In all my years, although I knew of the Mutiny on the Bounty, I'd never actually read about it, watched a film or read the book.

The account was very interesting, I enjoyed the level of detail all the way through and it was without doubt, an incredible feat of survival.

I generally like the narrators way of talking, some times, he seemed to hesitate over names, dates, bearings etc but that just gave the impression of a ship captain checking his logbook. It actually worked well.

However this audiobook is badly let down by the editing. I counted three or four times where the audio either faded away or just cut off in the middle of a sentence. I lost count of the number of times the narrator stopped talking, there was a silence and then he started again, in a different tone of voice, only to repeat the previous sentence. I can only imagine this was when the recording session was paused and then continued. A simple re-listen to the source material and some editing would have resolved this.

I appreciate this is an old recording but I'd hope these sort of mistakes would be resolved.

A glimpse into another world

an amazing survival story which took me into another world, which was partly thanks to the excellent narration. the whole thing felt so authentic - which is not to say it was an accurate description of the events. if it is accurate, those men were very lucky to have had a leader who never made a bad decision and was always right about everything.

I love this book. The guy really loves breadfruit tree, can't get enough of them. I don't think this will spoil the book, but he tries to take 70 of them home. They just taste like bread though. Crazy! Recommended

A great real world story though occasionally sounding like the shipping forecast!
Let down by bad edits which could have been dealt with by only listening through once.. The audio for me also missed the first word of new paragraphs too though this could be an audible issue.