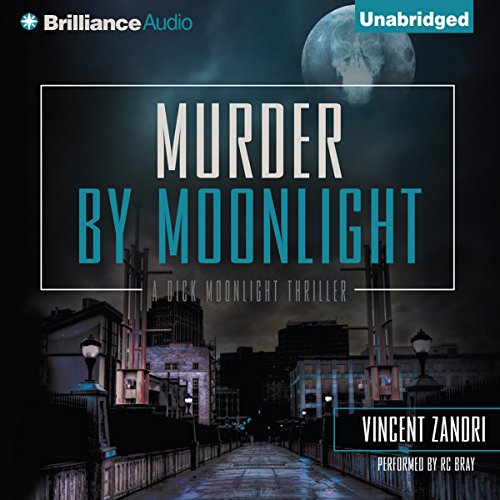 What’s a nice, proper dame like Joan Parker doing in a place like Dick Moonlight’s office? The scar running down her face - from the business end of an axe - has something to do with it. Shortly after the attack that killed her husband and left her for dead, she pointed the finger at her son, Christopher, who now sits in jail.

But the woman insists the police have it all wrong - Christopher didn’t do it - and she just needs the private eye to prove it. Moonlight knows mothers will say anything to protect their kids. He also knows how the police can take a mistake and run with it. Having been nearly dead a time or two himself makes Moonlight a little more empathetic. He takes the case, and soon the clues lead him toward something more sinister than he’s ever seen before.

This series is really special

I listened to books seven and eight in this series and loved it enough to want to go back and get the early stories. I was surprised to learn that RC Bray was the narrator (love him!) and that just made the listen that much more enjoyable.

Moonlight is on the hunt for the truth. Did a son take an ax to his father's and mother's head? The quest to find the answer takes Moonlight down some very dark and disturbing roads. The ick factor was seriously out of control with this listen.

This was a great listen with an ending that was totally worth the time spent. Loved it!

"Vincent Zandri's Murder by Moonlight" is a superior mystery novel in all respects. Fine prose, terrific suspense, believable characters, and one of the most unexpected and satisfying conclusions I've read in a long time. Highly recommended."

not a bad old read..