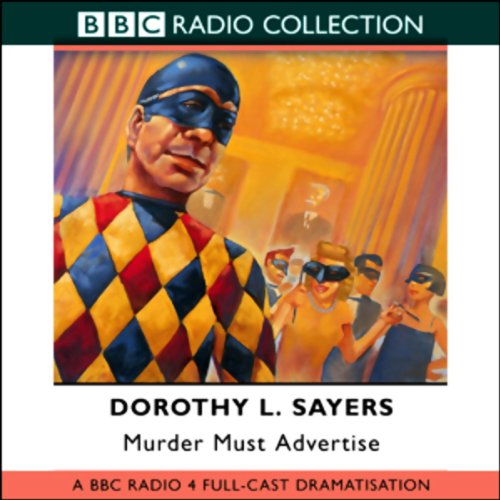 When copywriter Victor Dean falls to his death on the stairs of Pym's Advertising Agency, everyone assumes it was an unfortunate accident. His replacement doesn't think so and begins asking a lot of questions. The new man is something of a mystery to his colleagues, and he certainly dresses well considering his meagre writer's salary.

Of course the new copywriter is none other than Lord Peter Wimsey, working incognito to uncover the truth behind what is certainly murder. In between writing catchy slogans, Wimsey sets out to catch the murderer and finds a network of blackmailers, drug pushers, and killers.

But the deeper he gets into this criminal underworld, the more his own life is in danger. And as the murders increase, he must work to a tight deadline if he is to solve the case before it's too late.

What listeners say about Murder Must Advertise (Dramatized)

This is one of my favorite books ever. This acted out performance of it is an amputation of it's most delightful parts. Ouch!
Somewhere someone should do an audible book of Murder Must Advertise. This is an unfortunate cousin with its toes cut off at the knee.

The book is an old friend, and this dramatization is well-done. But I miss the parts left out--necessarily, as most are too visual.

Ever wonder what London was like in the 1920's? D. Sayers has given us a magnificent view with Lord Peter posing as Death Bredon, his lookalike relative, secretly investigating a murder at an advertising agency. Lots of suspects, loose glitterati, and wild drug parties, not to mention funny ads in newspapers. The audio is clear as a bell and the acting will keep you on the edge of your seat. Great sound effects make this a tremendous buy. Thanks Audible, for giving us Ian Carmichael at his very best. Now for the next audio program in this series?

We NEED the unabridged version

What did you love best about Murder Must Advertise (Dramatized)?

Dorothy Sayers is my favorite. Her characters are charming and yet many sided. The plot is not predictable and full of interesting twists.

What other book might you compare Murder Must Advertise (Dramatized) to and why?

What does Ian Carmichael and Full Cast bring to the story that you wouldn’t experience if you just read the book?

The cast, led by Ian Carmichael was fantastic! Some readers may need to be reminded that this is a radio adaptation rather than a traditional audiobook, but it works beautifully.

Dorothy Sayers wrote mysteries that are always fun even if some of the attitudes are a bit dated, they hold up well overall.

Nothing. The cast was superb!

Some of the jokes about the advertising industry are still true today even though the book is from 1933. Great fun! Audible, the BBC did a whole series of these productions. At present, you only have one other which I have already downloaded. Please get some more!!

Where does Murder Must Advertise (Dramatized) rank among all the audiobooks you’ve listened to so far?

Classic mystery in an English landscape

What did you love best about Murder Must Advertise (Dramatized)?

Love Ian Carmicheal's performance. All the actors did a supurb job and was a delightful audio play.

What does Ian Carmichael and Full Cast bring to the story that you wouldn’t experience if you just read the book?

the English accents make the dialog live. You can practically smell the office and feel the English fog.

I knew I didn't want any narrator than Ian Charmichal. I wish all the Sayers books were done so well. If they were I would buy them all!

Excellent production of a fascinating drama!

I really enjoyed the story, and the adaptation was very good indeed. I could have done without the Audible comment at the end - it left no room to appreciate the finale. But the casting was good did justice to the book.

A full Bob's worth for your Bob

Listened to this with a friend while we were travelling to and from a days walking. The story is easy to follow, enjoyable if somewhat predictable. Ian Carmichael is excellent as Lord Peter Wimsey and we both recognised some of the other players.We were both amused at times by how much a bob (£0.05) could buy in those days. As is usual in stories of this period Lord Peter's set are all pretty good chaps and the bad guys are cads and bounders and we have a femme fatale to add a little spice.

Wonderfully adapted for Radio Peter Jones was brilliant as Wimsey's faithful sidekick and I an Carmichael was unmatched as Wimsey himself.

D. L. S is in a class of her own. She brings her characters, especially Lord Peter, to life and uses her own real life knowledge in her books. Long live the Queen of murder and mystery.

canny book to listen to on a night at work driving

canny book to listen to on a night at work driving up and down the country.

Great adaptation. Carmichael's iconic depiction of Lord Peter has yet to be surpassed by any subsequent performers or narrators. Simply the best.

narrative was great and very refreshing to listen too, absolutely perfect for listening enroute to