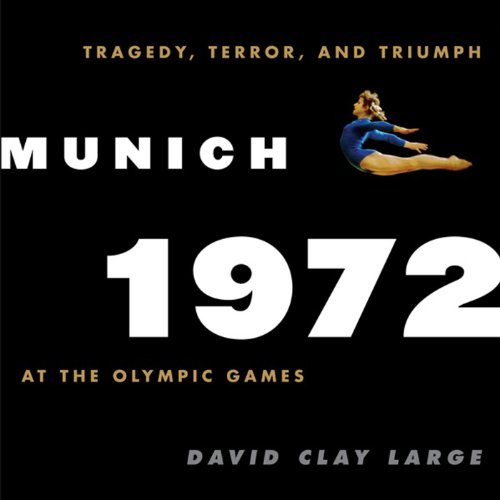 Set against the backdrop of the turbulent late 1960s and early 1970s, this compelling audiobook provides the first comprehensive history of the 1972 Munich Olympic Games, notorious for the abduction of Israeli Olympians by Palestinian terrorists and the hostages' tragic deaths after a botched rescue mission by the German police.

Drawing on a wealth of newly available sources from the time, eminent historian David Clay Large explores the 1972 festival in all its ramifications. He interweaves the political drama surrounding the Games with the athletic spectacle in the arena of play, itself hardly free of controversy.

Writing with flair and an eye for telling detail, Large brings to life the stories of the indelible characters who epitomized the Games. Key figures range from the city itself, the visionaries who brought the Games to Munich against all odds, and of course to the athletes themselves, obscure and famous alike. With the Olympic movement in constant danger of terrorist disruption, and with the fortieth anniversary of the 1972 tragedy upon us in 2012, the Munich story is more timely than ever.

What listeners say about Munich 1972

Overly long, many errors in pronunciation

If multiple typos are unacceptable in a written book, then this audio book was ruined by a complete lack of audio editing. The worst offense was reading the winning time in the US 4 x 100 meter relay as 38 minutes and 19 seconds, instead of 38.19 seconds. C'mon, doesn't anyone proof these things?!

This book is about the history of the 1972 Munich Olympics. These games most remembered for the terrorist attack on the Israeli athletes, is not the main topic of the book This is a complete history of Munich games from the very beginning stages the the final ending ceremonies.

This audiobook is broken into two parts. FEEL FREE TO FAST FORWARD THROUGH THE FIRST PART, as most of this part is boring. I just couldnt get into the history of german architecture.

The second part is the main gusto of the book. It is here where all of the action takes place. From Marck Spitz to Olga Korbut, the full flavor of the games come to life. As if that wasnt enough, the mens finals in basketball between the US and USSR is detailed

There was a lot more to the Munich games besides terrorism. This book succeeds in telling us.