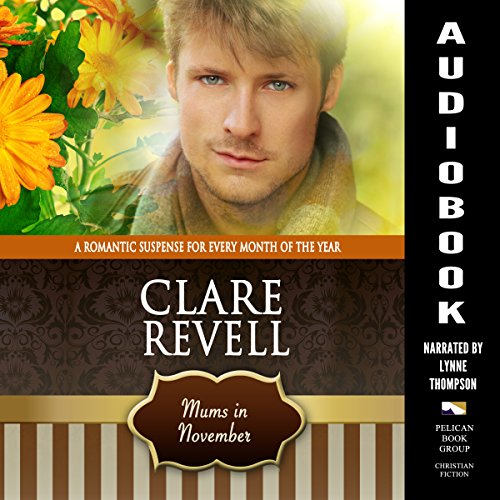 'Mums in November: A Romantic Suspense for Every Month of the Year (Flowers Can Be Fatal)

Running into Amber Neville after 20 years wasn’t on Dr. Jackson Parker’s list of things to do. Amber had been head girl to his head boy, and from what he remembers, she was British, stuck up, and bossy.... But the red-haired beauty she’s grown into leaves him stunned.

Newly returned from a job in Canada, Amber remembers Jackson as a brash and rude American - not at all the even-tempered, handsome doctor he's turned out to be. But she can’t get involved, not with the massive burden she bears - a burden that has to remain hidden at all costs.

As secrets are revealed, Amber’s life is thrown into danger. As the flowers fade, so does her chance of survival. But Jackson has other plans. After all, doctors are meant to save lives, no matter the cost.

What listeners say about 'Mums in November: A Romantic Suspense for Every Month of the Year (Flowers Can Be Fatal)

A chance meeting brings her back to him.

Running for her life, she finally finds a community that she feels safe in. Then her past catches up with her.
Even being dragged 500 miles across country, her friends hadn't given up their search.
Dramatic and tension exudes from Amber, the main character of this story. I again feel anyone reading or listening to this tale would enjoy the suspenseful and intriguing story.

Good but not my favorite one in this series

This was another good book in this series. It wasn't my favorite though. I feel the others were better. I am not sure what exactly was missing for me in this one...but I still enjoy this series and this author. I am sure others will enjoy it too. I look forward to reading more in this series. Of course there is a nice amount of drama and suspense in the book that will keep you listening. I am going to add this author to my auto read/listen list and keep my eye out for more of her books. The narrator did a good job once again as well.

Delightful story of Jackson and Amber and what they were twenty years ago, is so much different now. They are no longer the brash, pulling stunts. She has secrets, when her life is in peril, Will Jackson as a doctor be there to help. Good story and narration. Given audio for my voluntary review and my honest opinion

Enjoyed this audio book very much from start to finish great story line too
I was voluntarily provided this free review copy audiobook by the author, narrator, or publisher.