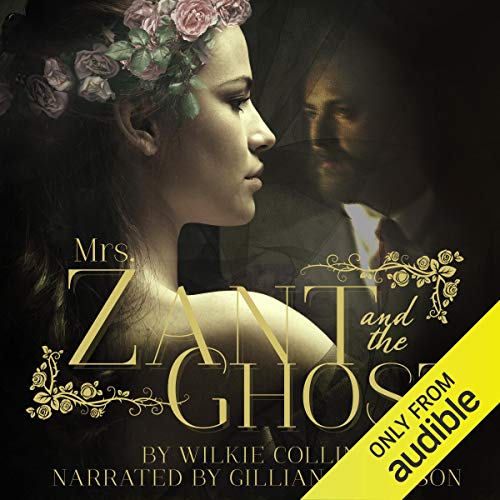 Mrs. Zant and the Ghost

Mrs Zant has recently lost her beloved husband, and while walking in the Kensington Gardens, the spot where she and her deceased husband declared their love for each other, she feels his presence trying to warn her of some coming danger.

Mr Rayburn witnesses it all, and he'll have to fight his own incredulity regarding the supernatural and his gut feeling that the disturbed young woman is telling the truth.

What listeners say about Mrs. Zant and the Ghost

Ever since I listened, mesmerized, to The Woman in White I’ve been intrigued by Wilkie Collins. A protégé of none other than Charles Dickens, he’s the sort of writer who, at his very best, makes you wish he had written a great deal more. He did, but he seems, at least according to my slender knowledge, to have failed to live up to the full promise of his talent. Though the flow of work continued to his death, the consistent excellence achieved in the 1860’s (The Woman in White, No Name, Armadale and The Moonstone) was not sustained through the last two decades of his life.

The death of his mentor in 1870 and an addiction to laudanum, which Collins first took to relieve severe gout, are usually blamed for the decline in the quality of his work. As sad as all that is, it leaves the person who wants to hear more of Collins in something of a quandary. I have The Moonstone and I can’t wait to hear it. But after Moonstone I will have run through Collins’ best-of hit parade. As far as I can tell, no recordings have been made of No Name or Armadale. So I hesitate to embark on the last of the best, knowing there’s nothing after that. Silly? I know, I know.

Plan B? I dither with lesser works, hoping that when the critics call his output “uneven” that implies there are still a few high spots. The good news is, there are. And Mrs. Zant and the Ghost is one of them.

I didn’t know the trajectory of Collins’ career when I picked up his “The Haunted Hotel” (1879) on sale late last year. My disappointment with that novella lead me to seek the explanation of how the author of The Woman in White could turn out something so muddled. Grabbing Mrs. Zant and the Ghost—a story that I assume, since I can find no bibliography that includes it, is part of the collection “The Ghost’s Touch and Other Stories” (1885)—was taking another risk, of course. But at an hour and 38 minutes the time commitment was minimal and at “free” (to Audible members and non-members alike) the price was right.

Like Woman in White, our protagonist is drawn into a strange situation quite accidentally. The unsettling weirdness that pervades the story is generated, as in Woman in White, by an inability on the part of the characters—and the reader/listener—to determine if the threat they sense is real or simply imagined. If real, something should be done and done quickly. But if imagined, acting would mean throwing outrageous charges at innocent people, making our protagonist look ridiculous or worse. The essential elements that make a “sensational” work by Collins so sensational are here. Added goose: unlike The Haunted Hotel, in this story he manages to make a ghostly visit feel authentic. By comparison, the floating head in Haunted Hotel looks like something strung up in a suburban front yard to startle the kids on Halloween night. Finally, if this story belongs to that 1885 collection, then Collins was also resisting an impulse to serious social commentary that harmed the popularity of his later output. I enjoy authors with a point of view. I avoid those who wave an agenda.

Gillian Anderson, does a fine job with all this. My only criticism may be rooted not in her performance but in my circumstances; I usually listen on the train to and from work. Especially on the way home, what with the gentle swaying of the cars and the 8 or 9 hours of work that just wound up, her soft, gentle, insinuating delivery threw a soporific veil over me more than a few times. I don’t think that, ensconced in an easy chair with something to drink at one’s elbow, that delivery, so perfectly modulated to the tenor of the writing, would pose the same problem.

Charming little story of its time

This is a charming little Victorian story of ghosts and lost loves -- it's not particularly scary and not especially thrilling, but the story of a ghost appearing to protect his (living) love is still a little creepy. The language and style is very Victorian, so if you're not used to that you might find it a little flowery and slow.

Gillian Anderson has a wonderful and melodious voice, but as a performer of an audiobook, she really didn't do a very good job. There is poor-to-no differentiation between characters, so while she would be great reading a poem, essay, or speech, that weakness really is ais a real negative in an audiobook performance.

Gillian Anderson's narration of this story really shines. The story itself is good but I believe her narration takes it to a whole other level. I
Highly recommend.

Why would they have Gillian Anderson assume a ridiculous low throaty pseudo Engish accent for this reading...even at the end for the credits, she "stays in character". Perhaps the recording predates her fame. The story is dated and predictable.

The writing was tender and the narrator respected this. Both brought out the sentimental in me. I found the piece to be sensual, the way the author allowed me to know the thoughts and feelings of the characters, especially since it was on the backdrop of a time when, to my knowledge, communicating such things was not done.

Sometimes a Victorian story hits the spot. Once you get past the rather overwrought prose and the silly manners of that era and realize it is a product of its time, the story is kind of fun. I do wish the end had tied things up more neatly and that the narration was a bit more expressive, but for a short story, it was worth the time

To be fair, I love her. I love hearing her talk, I love the characters she's played on the X-Files and Hannibal, so why shouldn't I love this?

Well, I evidently need more than husky drawl to bring characters to life. Oh, and I probably need some characters to act like real people for them to come to life as well. The story was bland and most of the motivations made little to no sense, and there was little resolution for any of the plot.

Disappointing on all fronts to say the least.

Excellent short story.The narrator did very well in changing voices and not keeping a monotony tone.

I enjoyed the amazing and beautiful voice of Gillian Anderson! She totally melts me throughout the reading. I wish we could have tea and discuss books together.

Don’t read it if you liked Turn of the Screw

No twist. No substance. I actually set the narration to a higher speed so I could get through it faster.

A ghost story made bewitching by the narrator

Gillian Anderson has an almost unearthy quality to her voice and demeanour. She is thus the perfect narrator for this subtle and beautifully written ghost story. This is a real treat made even better by the fact it is currently offered as a free download on Audible. I strongly urge you to start the New Year on an excellent footing with this wonderful gift.

silky tones over a victorian ghosty

not terrible,reminiscent of good victorian ghostys I used to read as a child but now not realy my thing, Gillian lulled me to sleep on several eves though so worthy))

Interesting writing style I have no idea if people have really ever behaved in the way the character's are portrayed or if this is simply how we would like to look back at history but fun to listen to for an hour or so.

Could not get into story?

From introduction through to end I disliked story and it's presentation. Narration irritated me. Situation was not improved by being a noisy recording. A flop.

An understated ghost story with more interesting living characters than the dead. The titular Mrs Zant was reminiscent of Maud from Fingersmith and the other characters felt like Conan Doyle's, although in such a short story, lack of motivation and backstory left them feeling a little cardboard.

In this audiobook version, Gillian Anderson's narration was slow and with a ghostly, murmuring tone which gave an appropriately melancholy quality, although the pauses between dialogue and narrative were a little stilted.

Poor story and terrible narration. There isn't anything else to say really , I thought it would be better.

Mrs Zant and the ghost

What would have made Mrs. Zant and the Ghost better?

Possibly a slightly more lively narration. I'm actually a big fan of Gillian Anderson and I looked forward to hearing this as it was read by her. But for some reason she sounds very bored and slow reading this, with little expression - and it almost sent me to sleep. The story is old fashioned as is to be expected, but rather slow and not one of Wilkie Collins's best in my opinion. (And I do enjoy most of his stories and novels and others of that era in a similar vein.)

Something with a bit more life! I've just started The Shining Girls.

Who might you have cast as narrator instead of Gillian Anderson?

Peter Kenny? He makes everything sound interesting and is good with voices.

May be good to listen to in bed if you have trouble falling asleep!

A monotonous and strange narration from Anderson. Breathy and rather odd.
I think the intention of as spooky, but it just comes across as exasperating and completely devoid of emotion.
Very disappointed for someone overall, as this meant the whole story was slightly lost as it was hard to get away from the distracting tone.
Not recommended.