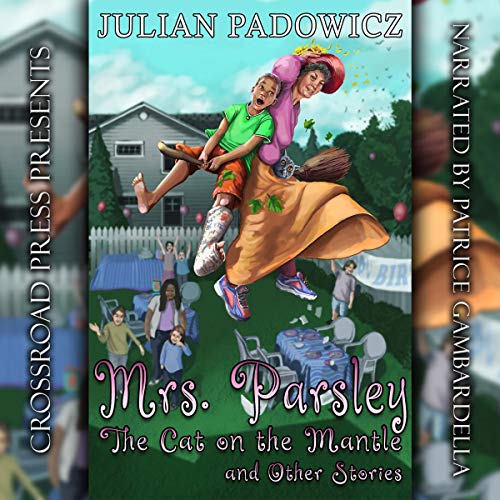 Mrs. Parsley is a good witch. Only a tiny percentage of witches are actually evil, she says, but they, unfortunately, get most of the publicity. She, herself, uses her limited magical powers to help Santa, the Tooth Fairy, and the various fairy godmothers, when they get overloaded. But, because her magical powers are limited, and she can't fly in and out through closed windows, turn pumpkins into coaches, or work her "smart phone," Mrs. Parsley is often forced to improvise. As reviews of the first book will attest, the resulting adventures are of interest and amusement to adults as well as children.

Stories included in this collection:

Mrs. Parsley Did This Snowballs

Mrs. Parsley and the Hunter

Mrs. Parsley and Patti Schroeder the Cat on the Mantle

Mrs. Parsley and the Squirrel

Mrs. Parsley and the House Without Doors

What listeners say about Mrs. Parsley

My opinion varies from story to story

This is the first book I’ve read/listened to by this author. I’m unsure if I like these stories. I’m on the fence. Some were better than others. I did not finish the book yet. I had a hard time staying interested since I had not really enjoyed a few stories. I came back to the book twice, and on what was going to be my ‘last chance listen’ I heard the story involving Mrs. Parsley and a young boy on a plane. This story had some underlying good advice and moral. This makes me feel I’ll have to come back to it later and listen to the rest to see if I can find another one as good as this one. I’ll update my review if needed.

This is the first book I’ve listened to by this narrator ( Patrice Gambardella ). She used different voices for each characters. She reads more than performs the book, but regardless, it is nice listening to her.

Fun Collection of Stories Great for All Ages!

I received this audiobook free at my request and am leaving this review voluntarily.

I really enjoyed it! The narration is great. The author did a great job with the characters. I look forward to reading more books from this author. I was given this free review copy audiobook at my request and have voluntarily left this review.