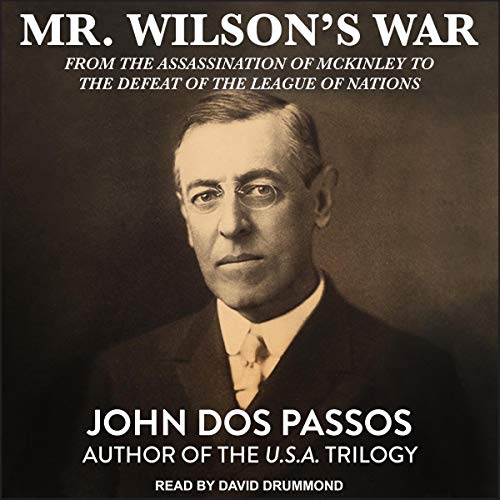 Beginning with the assassination of McKinley and ending with the defeat of the League of Nations by the United States Senate, the 20-year period covered by John Dos Passos in this lucid and fascinating narrative changed the whole destiny of America. This is the story of the war we won and the peace we lost, told with a clear historical perspective and a warm interest in the remarkable people who guided the United States through one of the most crucial periods.

Foremost in the cast of characters is Woodrow Wilson, the shy, brilliant, revered, and misunderstood "schoolmaster", whose administration was a complex of apparent contradictions. Wilson had almost no interest in foreign affairs when he was first elected, yet later, in proposing the League of Nations, he was to play a major role in international politics. During his first summer in office, without any previous experience in banking, he pushed through the Federal Reserve Bank Act, perhaps his most lasting contribution. Reelected in 1916 on the rallying cry, "He kept us out of war," he shortly found himself and his country inextricably involved in the European conflict.

This is an excellent audiobook version of an equally excellent history book. Jon Dos Passos is a very notable author in his own right. He is also a veteran of World War I. He served as an ambulance driver. Coincidentally Ernest Hemingway was also an ambulance driver. They eventually became associates. As far as I know, Jon Dos Passos is mostly known as an author of novels. Some of his novels are difficult to read. However this history book is very readable. I learned a great deal and did parallel reading. Everything I read in study matches the information in this book. I really, really liked this book. Thank You...

John Dos Passos was one of America’s great writers of the 20th century but who knew he could be such a good historian? I enjoyed this book quite a bit. The narrator David Drummond is excellent.

I felt a greater depth of understanding for this terrible yet amazing time in our history.