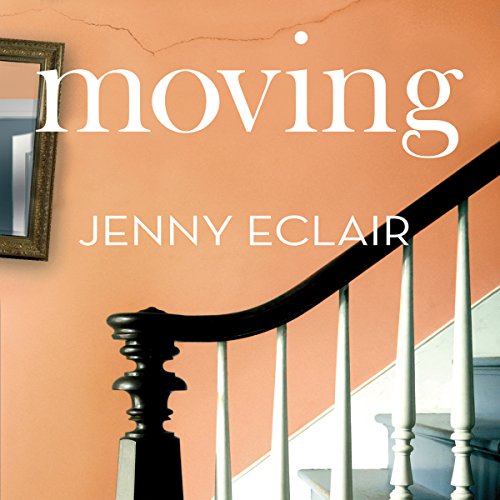 It took only one night to tear a family apart.

Artist and illustrator Edwina Spinner used to have a busy family life. Now she lives alone in a house that has grown too big for her. She has decided to sell it. As Edwina takes the estate agent from room to room, she finds herself transported back to her life as a young mother. Back to her twins, Rowena and Charlie, and a stepson she cannot bring herself to mention by name. As the house reveals its secrets, Edwina is forced to confront her family's past and a devastating betrayal that changed everything. But Edwina doesn't know the whole story. And to discover the truth, she will have to face the one person she vowed never to see again.

What listeners say about Moving

I accidentally stumbled across a review of Moving on Goodreads, decided it sounded just what I felt like reading at the time and purchased a copy of the audio version for my daily commute. And what a wonderful treat this book turned out to be! Having only known Jenny Eclair through her work as a comedienne, I had no idea that she is also an accomplished writer. There is nothing funny about Moving, though Eclair’s wit and astute observations of human behaviour shine through the pages and make her characters come to life.

Told through three different POV’s, Moving starts with the reminiscences of Edwina, an elderly woman moving through the rooms of her vast empty house and reliving different moments from the past, from when she was first married, to childbirth, the death of her first husband, the highs and lows of motherhood, a second marriage and tragedy. I loved the way each chapter revolved around the separate rooms of Edwina’s house, each relating to the characters who had inhabited them and their involvement in Edwina’s life – very clever! In the second part of the book the writing style changes dramatically as 19-year-old privileged drama student Fern takes over the narrative, connecting with Edwina’s life story in a way that is not instantly obvious. Of all the characters, I found Fern’s voice the most compelling, perhaps because Eclair so aptly describes the ecstasy and agony of first love. I was devastated when Fern’s part of the book ended without revealing ... well, you will need to read it to know what I mean, I don’t want to give any spoilers here. Taking over from Fern we have Lucas, who I initially found quite repulsive and difficult to relate to. There is always a risk of losing the reader’s interest when introducing such an unlikeable character, but I need not have feared, because it soon became evident that Lucas provided an important part of the story. With Eclair’s insight into all of life’s stages evident, she managed to gift even the unlikeable Lucas with a voice that kept me interested and soon drew me back into the storyline.

Thanks to Eclair’s keen understanding of the human psyche as we move through life – young love, marriage, motherhood and the insights and regrets of old age – Moving took me on an emotional rollercoaster that made me laugh and cry and shake with fury. Sometimes funny, often confronting and mostly heartbreaking, Moving tells the story of an ordinary family through the eyes of different people. To say it touched me deeply is an understatement – it haunted me long after I had finished reading it, and I missed the characters as if I had lost old friends (or foes). There is so much emotional baggage in this story, it is impossible not to relate to some of it, even for the most sheltered and righteous reader. Eclair writes with a black humour and a candidness that some may find confronting, but which I found refreshing and unique. I recommend Moving to anyone who enjoys an honest, thought provoking read about families and relationships and look forward to reading more from this talented writer.

A really engaging story, set over many years and generations, with a good ending.

Unexpectedly good if a tad depressing

Not what Expected by the blurb or the author. Thoughtful, sad and full of anxiety but eminently readable and enormously visual. A good story which echoed real events.

A fantastic story showing just how complicated families and step families are. It shows how decisions are made and how they impact on others in ways you dont guess. blame laid at peoples door, when really its no ones fault, except life and its sometimes cruelty. Well worth a listen and narrators are amazing.

came across this by accident and was pleased I did it was a very engaging story well written and wonderfully performed. Recommended.

I wasn't sure if I would enjoy this book as Ms Eclair is not my most favourite performer. She is now a favourite author! Moving was an emotional read both sad, tender and funny. A really accurate portrayal of complex family relationships with brilliantly drawn characters who o loved and hated in turn. An excellent read.

just listen to it. I really enjoyed this book is shall be looking for more by this author.

I didn't know what to expect from this book, but was very pleasantly surprised and was gripped from the start. The twists and turns in the family history are fascinating. I thought the performances were good, although the voice of Fern sounded a bit computerised at times. I was sad to finish as I want to know what happened next!

Not much really, couldn't even finish the last half an hour or so

Having thoroughly enjoyed vanilla cream slices I was disappointed with this. There were NO Sympathetic characters except the black nanny and she was only sketchy. All the others were thoroughly unpleasant and unlikeable, complete idiots or nasty pieces of work

I’m really enjoying this book. It’s simply wonderful and has kept my buds glued to my ears for hours.

Edwina is selling up her house and she starts to clear it out and that’s what the book is about ..skeletons start rattling in long forgotten cupboards and fears are faced. The reader goes right back in time with Edwina and we feel her grief, pain, happiness as the story goes on.

This book is on my best book list of 2019 and I will look out for more from both the author and narrator.

Bought as a DD.